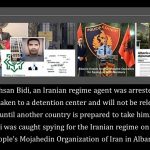 Written by Amineh Qaraee on October 21, 2020. Posted in NEWS 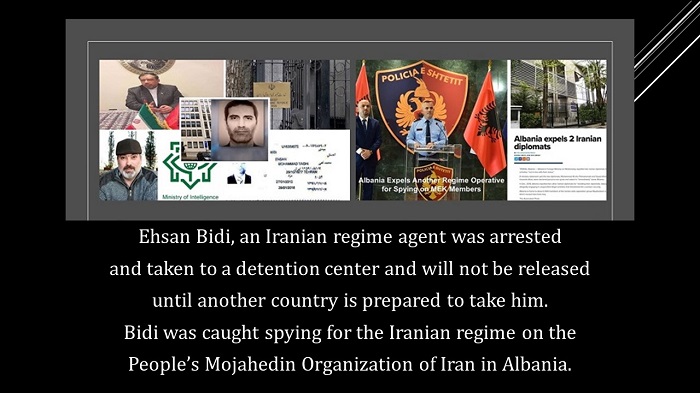 Along with these incidents, there have been prolonged misinformation campaigns by the regime against the (PMOI / MEK Iran), as well as foiled terrorist attacks on Ashraf-3. Several Iranian diplomats have been told to leave Albania.

The Interior Ministry of Albania took the responsibility for expelling Ehsan Bidi, an Iranian regime agent on October 17th. He was arrested and taken to a detention center and will not be released until another country is prepared to take him. Bidi was caught spying for the Iranian regime on the People’s Mojahedin Organization of Iran (PMOI / MEK Iran), in Albania.

The regime immediately began to cover up the arrest and said that Bidi had been taken to a safe place because the MEK had tried to kill him. These are the words of Massoud Khodabandeh, an infamous regime agent, who wrote on the Facebook page of the MOIS: “According to Albanian police, agents of the MEK who have infiltrated the circle of former members of the organization was planning to kill Ehsan Bidi.

While the police are investigating the MEK insider, Mr. Bidi was transferred to a safe location.” Bidi seemingly supported this social media post but they are all lies as the day after the arrest, Albanian media sources reported that Bidi had been expelled due to his criminal activities with the regime and against MEK members in their Albanian base.

Bidi has a well-known association with MOIS. He also surrendered in 2012 to the Iranian regime’s Iraqi operations when he was in Camp Liberty in Iraq with MEK members. When he left the MEK, he ended up in Hotel Mohajer in Baghdad which was under the control of the Revolutionary Guards (IRGC) Quds Force. The regime persuaded the UNHCR to send Bidi to Albania as a refugee. When in the country he was used to spying on MEK members that were slowly being sent there.

In 2019, the Albanian authorities arrested him and charged him with crimes he had committed, and he was sent to a camp for 12 months. Last July he was told he could leave Albania but was stopped in Greece and was sent back to Tirana.

Earlier in October, Bijan Pooldarag was arrested in Albania, another Iranian regime agent. The charge was spying on members of the MEK in Ashraf 3. The charges leveled against  Pooldarag included the following:

Albanian authorities expel an Iranian agent who disguised himself as a reporter. The agent's name was Danial Kasraei and was planning for terror attacks against the Iranian opposition @Mojahedineng of #Iran (PMOI/MEK) in Albanian soil.https://t.co/BUZxA15idF

Danial Kasraei, another regime agent, who entered Albania pretending to be a journalist, was also expelled. Gholamreza Shekari, linked to Bidi’s associates in Albania, is at this time in prison for the crimes he had committed.

.@barbarahans I read your new negative piece on the MEK + their response that said Iran's state media published excerpts of it back in Nov 2018. A Google search today shows they're right. How could .IR websites run the text before it went live on @DerSPIEGEL?
FYI: @RichardGrenell pic.twitter.com/miw5915tdk

Along with these incidents, there have been prolonged misinformation campaigns by the regime against the (PMOI / MEK Iran), as well as foiled terrorist attacks on Ashraf-3. Several Iranian diplomats have been told to leave Albania.

The National Council of Resistance of Resistance of Iran (NCRI) issued a statement saying that foreign agents should be told to leave countries where they are interfering with the people and affecting their well-being.