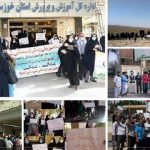 Written by Amineh Qaraee on October 19, 2020. Posted in NEWS 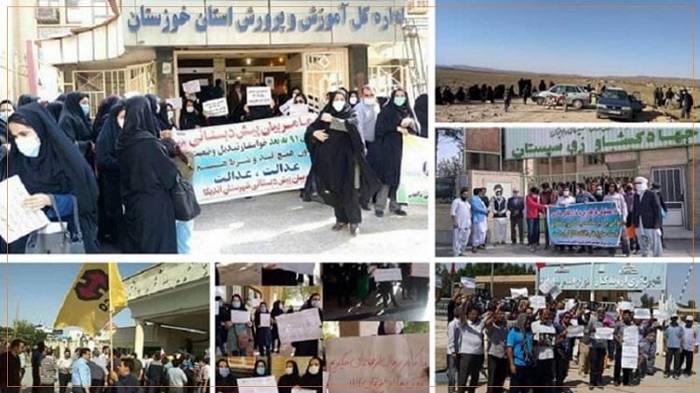 The People’s Mojahedin Organization of Iran (PMOI / MEK Iran) has been reporting on the other protests taking place across the country too, indicating that various groups of workers and employees have been gathering to call for the payment of long-overdue salary payments.

Over the past week in Iran, there have been numerous protests held across the country by various sectors. A lot of the protests were to do with the economic situation that is affecting the lives of millions of Iranians.

There were significant protests following the death of Mohammad Reza Shajarian – an icon in the eyes of the Iranian people. Mr. Shajarian died on Thursday 8th October after a long illness. He was a revolutionary artist that contributed significantly to Iranian culture over the past few years. Despite once declaring that he would never get involved with politics, he condemned the Iranian regime for its suppression of the people following mass protests. He was a much-loved figure in the country.

"State media is a disgrace!"
"Down with the dictator!"#IranProtestspic.twitter.com/GB7QfCCYpI

The Iranian regime banned him from holding concerts and participating in performances after he spoke out about the regime. Large numbers of people gathered outside the hospital in Jam where he passed away. The people were heard chanting anti-regime slogans.

The People’s Mojahedin Organization of Iran (PMOI / MEK Iran) has been reporting on the other protests taking place across the country too, indicating that various groups of workers and employees have been gathering to call for the payment of long-overdue salary payments.

According to the #MEK, municipal workers in the city of Arvand Kenar, southwest #Iran, held a protest in front of this city’s municipality building, demanding their delayed paychecks. #FreeIran2020 pic.twitter.com/eT9D7pCX7z

According to the MEK, municipals workers in Arvand Kenar held a protest in front of the municipality building calling for the payment of their wages.

MEK supporters in Ahvaz reported that the nurses and medical workers gathered in front of the University of Medical Sciences to demand the payment of their overdue salaries.

Many workers across Iran are faced with this same problem, made even more difficult by the worsening economic conditions. Many workers are very low-paid and can barely make it from one paycheck to the next, so any delay is a huge hardship.

Medical workers across the country are finding it difficult to manage the non-payment of their salaries too. It is despicable that they are not being paid when they are risking their lives on the frontline of this Coronavirus pandemic every day. As well as the extreme pressure they are put under every day at work, they also have to deal with economic pressures. Over 126,300 people have died of the coronavirus in Iran, according to reports by the (PMOI / MEK Iran).

More than 120,000 Iranians have died from Covid-19 according to reports by the People’s Mojahedin Organization of Iran #PMOI #MEK #Iran already and many cities are bracing for the third wave with no end in sight.https://t.co/VqGQOgu0cx

Contract workers from the Sistan Plain Irrigation Project gathered to protest the non-payment of their wages for 8 months. They also called for their bonuses from last year to be paid.

A group of contract workers from the Sistan Plain Irrigation Project gathered in front of the Agricultural Jihad building in the city of Zabol, southeast Iran, protesting their eight-month-delayed paychecks.#MEK #Iran #FreeIran2020 pic.twitter.com/GYqaVEruwM

MEK supporters in Ahvaz Also reported, teachers protested in front of the Department of Education building calling for their employment status to be changed (as per promises made by the Ministry of Education two years ago).

Pre-school teachers held a rally in front of the regime’s Department of Education in Ahvaz. They demanded a change to their employment status and protested previous promises made two years ago by the regime’s members of parliament and the Ministry of Education.#MEK #Iran pic.twitter.com/YrmlpC5jvx

In the city of Tehran, orphanage workers held a protest because of their poor working conditions and the status of their contracts.

Locals in Banan-e Bala – a village in the Kerman Province – protested because of the government mines that have caused the village wells to dry up.

The regime is extremely concerned about the protests that are taking place because it knows another nationwide uprising is on the horizon. It is putting more and more resources into suppressing and silencing the people.

Mullah’s regime continually blamed the MEK for the protests in Iran, and the importance of the MEK’s influence in Iran. This has backfired, as it has revealed the mullahs’ fear of the MEK and made the international community aware that the group has an active presence in the country. This was difficult to confirm before due to the regime’s closed media.