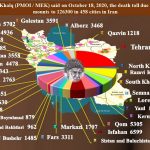 MEK Iran: COVID-19 Response in Iran Based on Greed and Disinformation

Written by Esmail Mohades on October 19, 2020. Posted in NEWS 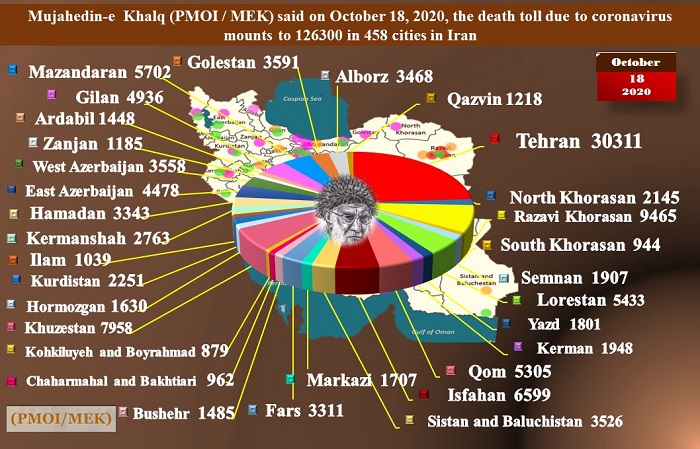 The Iranian opposition, the (NCRI) and (PMOI / MEK Iran), believes that the regime is using a callous response to the pandemic in Iran as part of its arsenal against any protests and suggestions of an uprising.

The Iranian opposition, the National Council of Resistance of Iran’s (NCRI), and the People’s Mojahedin Organization of Iran (PMOI / MEK Iran) has put the death toll from the virus at more than 126,300. Now, the country is confronted with more and more cases of COVID-19 as it spreads out of control around the country. It has got to the point that hospitals everywhere have run out of beds.

A report in the Financial Times by the task force member, Masoud Mardani, mentions third and fourth waves but in reality, there has always been only one wave in Iran as the cases continue to rise with no measures in place to protect the people. Mardani also mentioned that some hospitals were so full that they couldn’t admit any new patients.

More than 126,300 people have died of the novel #coronavirus in 458 cities checkered across all of Iran's 31 provinces, according to the Iranian opposition PMOI/MEK.

The leading Iranian opposition group, the People’s Mojahedin Organization of Iran (PMOI / MEK Iran), throughout the pandemic has been closely monitoring all of Iran’s outbreaks using its Iran based intelligence sources. Through its coalition partner, the National Council of Resistance of Iran (NCRI), the MEK has recorded far more active case rates and fatality figures than the regime is ever prepared to admit.

The MEK reports that it is hard to get the COVID-19 statistics wrong as there as so many hospital records and eyewitness accounts to draw upon to get a reliable indication of the death toll.  One of the worst acts that the regime has done is ignoring the danger signs when the outbreak began. Instead, they let it follow its own course and are now concealing the real figures.

COVID-19 PANDEMIC CAUSED BY THE PEOPLE, ACCORDING TO THE REGIMEThe Iranian opposition thinks differently and the…

The regime is trying to pretend that sanctions are the reasons for the poor response to the viral outbreak. Meanwhile, there is no shortage of cash held by the Revolutionary Guards (IRGC), and there is proof that the regime’s Supreme Leader, Ali Khamenei has plenty of money. This hoard of money is not being spent on face masks, but now the regime has told people that it is mandatory to wear one in Tehran, there is no monetary help to reach this goal. Also, hefty fines are being imposed on those who disobey the rule.

#Iran: The People’s Mojahedin Organization of Iran (PMOI/#MEK) announced on October 18, 2020, that the number of #Coronavirus fatalities in 458 cities exceeded 126,300. #COVID19 https://t.co/oNYdVNt3fg pic.twitter.com/kMZO52gpfh

Skyrocketing infection rates are no longer unavoidable and nothing will be done until there is a complete regime change or the country will have to take over the control of the virus.

In this regard, Mrs. Maryam Rajavi, the NCRI president-elect, said in a recent address that “today, regime change in Iran is indispensable, not only for freedom and democracy… but also for the health of each and every individual in Iran and for the protection of their houses, cities, and villages against natural disasters,”.

Today, regime change in Iran is indispensable not only to freedom and democracy in #Iran but also to the health of each and every individual in Iran and to the protection of their houses, cities and villages against natural disasters #FreeIran2020 #COVID19 pic.twitter.com/MNqb0SDGOW