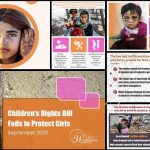 MEK Iran: Young Girls are Neglected by the Regime’s Bill to Protect Children and Adolescents

Written by Amineh Qaraee on October 17, 2020. Posted in NEWS 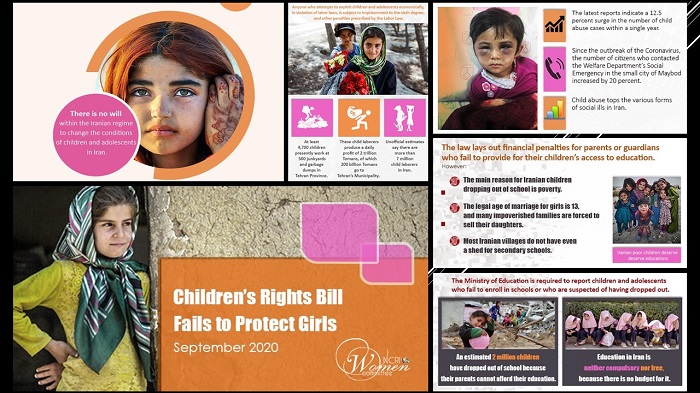 The Bill to Protect Children and Adolescents was hurriedly passed by the regime Judiciary on 7 June 2020, following public outcry in Iran and internationally over the honor killing of Romina Ashrafi. Romina was brutally murdered by her father on 21 May 2020, aged 14. Unfortunately, this was not an isolated incident, as women and girls have long been unprotected by the Iranian regime and can be subject to violence with little consequence for the perpetrator.

The news website of the People’s Mojahedin Organization of Iran (PMOI / MEK Iran), informed that a group of inhabitants of Sanandaj, the capital of the Kurdistan province, organized protests on 28 and 29 May 2020 for the murder of Romina Ashrafi.

#Iran
A group of women rights activists in Sanandaj in Kurdistan staged a protest against the brutal murder of 14 years old girl Romina Ashrafi in mullahs misogynist ruling.#رومینا_اشرفی pic.twitter.com/Z4WPxyo2mt

MEK Iran news website also shared the Amnesty statement on Twitter: “We call on Iranian authorities and legislators to end impunity for violence against women/girls and to criminalize domestic violence.

As the Women’s Committee of the National Council of Resistance of Iran (NCRI) stated in a statement of May 28, Romina’s tragic death “is the result of the oppressive and medieval policies and laws of the misogynist clerical regime that encourage and promote violence against women and girls. The religious fascism that governs Iran is responsible for the murder of Romina Ashrafi. “

MEK Iran also shares on its website that, the NCRI Women’s Committee urged the United Nations High Commissioner for Human Rights, Michelle Bachelet, the Human Rights Council, international forums, and UN special rapporteurs on women’s and children’s rights to condemn the Iranian regime for its misogynistic laws and practices that perpetuate such murders.

We strongly condemn the murder of #Romina_Ashrafi, the innocent 14-year-old girl and blame the religious fascism ruling #Iran for her death.https://t.co/XVHRoJfdjS

As Romina’s murder made headlines and influenced public opinion, the regime was forced the take action. The mass public outrage over honor killings caused Hassan Rouhani, the President of Iran, to order the expedited passage of the proposed bills; the Provision of Security to Women and the Bill to Protect Children and Adolescents. However, these bills are intended to deceive the public into believing change is taking place and their rights are being safeguarded.

#Iran’s Misogynist Regime Is Responsible for Romina Ashrafi’s Death
As long as the mullahs and their medieval constitution exist, these tragedies will continue. #HumanRights https://t.co/8ELl3BkeKX

In reality, the Bill to Protect Children fails to address any of the current policies or laws that violate children’s rights in Iran. The harmful marriage laws of the regime are left unaccounted for by the bill. The legal age of marriage in Iran for girls is 13 and the legal age of criminal accountability for female children is 9. Further to this, the bill does not allocate any sufficient budget to provide financial assistance for low-income families and ensure the welfare of Iranian children. Even if the bill is to be enforced, it would not benefit the children of Iran as the regime wants the people to believe.

Child marriage is a significant problem in #Iran where girls as young as 10 are being forced into marriage. According to the Sharia-based law of Iran, the legal age for marriage is 13 for girls and 15 for boys. #FreeIran2020 https://t.co/r4mEHNnoG5 pic.twitter.com/4rSmtRE4Eo

Another area of neglect in the Bill to Protect Children and Adolescence includes the lack of access to education. Article 6 of the bill describes the requirement of the Ministry of Education to report children and adolescents who fail to enroll in school, or who are suspected of dropping out, to a welfare organization or the Judiciary Office for the Protection of Children and Adolescents. However, education in Iran is not compulsory or free. Approximately 2 million children in Iran have dropped out of school because their parents cannot afford their education, though the real statistic could be even higher as the regime attempts to cover their tracks by underreporting the data.

Article 7 of the bill describes financial penalties that will be enforced for parents and guardians who are unable to provide access to education for their children. This puts the responsibility for the right to education onto the parent or guardian, who may be simply unable to afford the expense of education in Iran.

The website of the Presidential Legal Directorate stated on 13 June 2020: “The practical outcome, however, is further deprivation for the child, given that many parents cannot afford to pay for their children’s education.”

Today, June 12th, is World Day Against Child Labor#Iran, ruled by the mullahs' regime, has a child labor population of 7 million.
Be their voice. pic.twitter.com/PUXIT8AJ5C

The bill also fails to protect children from exploitation and abuse. At least 4,700 children currently work at 500 junkyards and garbage dumps in the province of Tehran and the continuous exploitation of child labor in Iran goes unchecked by the regime. Many children are forced into working as a means of survival and without access to education there is little alternative for them. One particularly tragic case was reported by the state-run IMNA news agency on 15 September 2020, in which Shahnaz Ramaram said that a 14-year-old garbage scavenger had become pregnant so that she could sell her infant to pay for living expenses.

Paragraph A of Article 9 of the bill is further evidence of the regime’s disregard for the rights of Iranian children. The article states that abuse that leads to the death of a child or adolescent is punishable by imprisonment in the fifth degree. The regime’s Punishment Law dictates that imprisonment to the fifth degree amounts to a sentence of 2 to 5 years. Therefore, a parent, such as the father of Romina Ashrafi, who murders their child may only face 2 years in prison for their heinous crime. In addition, Article 1179 of the regime’s Civil Code, enables parents to physically abuse their children, provided they do not exceed what is deemed to be conventional limits.

The unjust nature of this law is fully apparent when compared with the punishment that women may face for peacefully protesting for regime change or acting in self-defense. The Iranian Judiciary will sentence innocent women to death, such as Reyhaneh Jabbari who was executed for legitimate self-defense against rape. Many of the women who are executed are also victims of the misogynistic laws on early forced marriage and during their married lives often endure violence and harassment. This demonstrates the severe inequality that women face from Iran’s judicial system and the need to create legislation to protect women and young girls from the dangers of the regime’s misogynistic society.

Just spotted Sholeh Pakravan at a rally today outside Iran's embassy in Berlin supporting the #IranProtests. Her brave daughter Reyhaneh Jabbari was executed by the mullahs despite an international outcry in 2014 for killing an Intel Ministry agent in self defense@RichardGrenell pic.twitter.com/ECGs23nhEW

The Bill to Protect Children and Adolescence makes no reference to the forced marriages of female children, a practice that creates the acceptance of deprivation, violence, and a lack of autonomy for Iranian girls and women. The early marriage laws may also lead to young girls being widowed and left destitute without the resources to support themselves. According to regime statistics, which may be a moderate estimate, there were at least 24,000 child widows, under the age of 18, in Iran by 2018. If the bill was truly intended to protect children, the regime has severely overlooked a key area in need of change to ensure the safety and wellness of Iran’s young girls.

The regime has also allowed the forced marriage of children and continues to execute #Iranians that were minors at the time of their crime. Children have also been tortured by authorities in front of their parents. https://t.co/zygCbJN4yX #FreeIran2020

The children and adolescents of Iran, particularly young girls, are in desperate need of policy implementation that will allow them access to education and opportunity, as well as protection from abuse and exploitation. The regime has responded to the outcry over the murder of Romina Ashrafi by introducing the Bill to Protect Children and Adolescents with only the self-preserving intention of subduing the Iranian people. In order to ensure a brighter future for the youth of Iran, the regime must be replaced by the democratic resistance, the National Council of Resistance of Iran.

Iranian children are the hungriest, the most innocent and the most oppressed sector of Iranian society. Their conditions are tantamount to organized crime by the mullahs’ religious dictatorship. #NoChildLabour #WDACL #Iran pic.twitter.com/GfD97kPh78

Mrs. Maryam Rajavi is the President-elect of the National Council of Resistance of Iran’s (NCRI): Iranian children are the hungriest, the most innocent, and the most oppressed sector of Iranian society. Their conditions are tantamount to organized crime by the mullahs’ religious dictatorship.

Mrs. Maryam Rajavi, President-elect of the Iranian Opposition, has a ten-point plan to restore democratic rule to Iran after the fall of the mullahs’ regime and to ensure that child marriage is a thing of the past.