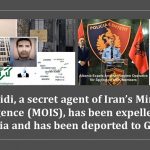 Written by Mohsen Aboutalebi on October 14, 2020. Posted in NEWS 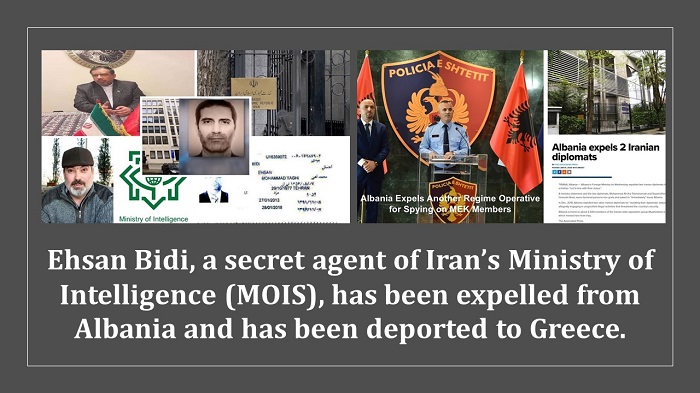 This is not the first agent that has been sent by the Iranian regime to spy on the opposition and it is unlikely to be the last. The regime’s brazen activity in Europe, especially in Albania where a large number of members of the (PMOI / MEK Iran) reside, is shocking, but not surprising.

A few days ago, authorities in Albania announced that an agent of the Iranian regime’s Ministry of Intelligence and Security (MOIS) was arrested for spying on members of the People’s Mojahedin Organization of Iran (PMOI / MEK Iran) – the main opposition to the Iranian regime.

This is not the first agent that has been sent by the Iranian regime to spy on the opposition and it is unlikely to be the last. The regime’s brazen activity in Europe, especially in Albania where a large number of members of the (PMOI / MEK Iran) reside, is shocking, but not surprising.

The individual recently arrested by the Albanian authorities has been identified by the Iranian Resistance (PMOI / MEK Iran), as Bijan Pooladrag – an individual that was expelled by the MEK last September.

Albania will continue to stand strong against Iran regime’s malicious activities. We're proud to have offered shelter to MEK members whose lives were threatened by the regime. We're not going to change our approach (Jan 29)

Well done to @ediramaal for standing up to Ali Khamenei pic.twitter.com/TN1bQZmK0d

The National Council of Resistance of Resistance of Iran (NCRI) and its Security and Counterterrorism Committee have said on a number of occasions that the Iranian regime has posted several agents in Albania to spy on the opposition. A number of the individuals used by the regime have already been exposed by the (PMOI / MEK Iran).

It was recently reported that an individual identified by the initials B.P. was arrested by the Albanian authorities. It has since come to light that the individual – Bijan Pooladrag – was expelled by the #MEK #Iran. in September of last year.https://t.co/Rj0Kil3D1a

The regime specifically targets members of the (PMOI / MEK Iran) that have been expelled from the organisation to gather information and intelligence. They are then used to demonise the opposition and give the regime justification for its terrorist attacks.

Another tactic used by the Iranian regime to demonise its opposition is to make use of “friendly” journalists that repeat the regime’s propaganda and slurs about the (PMOI / MEK Iran). They try to gain credibility by saying that they are getting their information from former members of the (PMOI / MEK Iran), making it appear that the “inside knowledge” they are talking about is real.

.@barbarahans I read your new negative piece on the MEK + their response that said Iran's state media published excerpts of it back in Nov 2018. A Google search today shows they're right. How could .IR websites run the text before it went live on @DerSPIEGEL?
FYI: @RichardGrenell pic.twitter.com/miw5915tdk

Normally we could rely on the real journalists to do their due diligence and research, however there have been cases in Europe where credible publications such as the German Frankfurter Allgemeine Zeitung and Der Spiegel have published lies about the (PMOI / MEK Iran). These cases were brought to court and it was confirmed that the MOIS were behind the baseless allegations. Although the publications were ordered to remove the lies they printed, some damage was already done.

Foreign media outlets must be aware of this situation and take all necessary steps to prevent the same mistakes being made.

The Iranian regime is piling so many resources into the demonisation of the opposition because it is such a big threat to its existence. The people of Iran are determined to see the regime collapse and the support of the (PMOI / MEK Iran) and its internal network of Resistance Units have been so valuable when it comes to amplifying their voice.