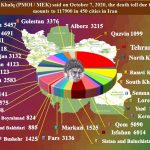 Written by Mohsen Aboutalebi on October 8, 2020. Posted in NEWS 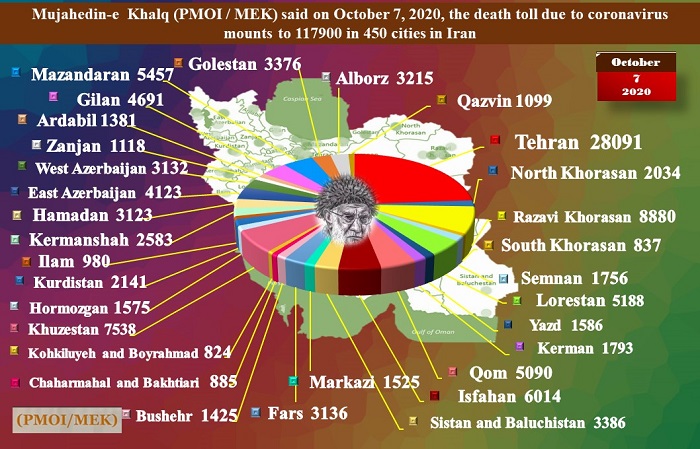 The main opposition to the Iranian regime – the People’s Mojahedin Organization of Iran (PMOI / MEK Iran) – has reported that the COVID-19 death toll has now exceeded 117,900. The Iranian regime, however, is reporting that the death toll is just a fifth of this – 27,658.

The number of people that have died after contracting the virus in Tehran alone exceeds 28,091, so the regime’s death toll is clearly far from accurate. As it has been since the beginning of the outbreak.

Over 117,900 people have died of the novel #coronavirus in 450 cities checkered across all of #Iran’s 31 provinces, according to reports tallied by the Iranian opposition PMOI/MEK as of Wednesday afternoon local time, October 7.https://t.co/epbIhVp0A0

The Ministry of Health regularly reports on the number of confirmed cases and the number of critically ill patients. The figures are engineered to make it looks like the situation is under control and it is clear the figures cannot be trusted. Nevertheless, the engineered figures reported yesterday still show that there is a cause for great concern. The Ministry of Health spokesperson said yesterday that there are 4,167 patients in a critical condition and 3,902 new cases.

Furthermore, according to the regime’s statistics, there have been 235 deaths in just 24 hours – the highest number for several months.

Hospitals across the country are struggling to cope with the number of patients requiring urgent medical attention and there are concerns about what the situation will be like in the next few weeks. A member of the country’s Coronavirus Task Force said yesterday that there may be no option but to establish field hospitals in order to be able to accommodate the sheer numbers of people needing medical intervention.

More than 117,900 people have died of the novel #coronavirus in 450 cities checkered across all of Iran's 31 provinces, according to the Iranian opposition PMOI/MEK. pic.twitter.com/1lTWNKiB76

Masoud Mardani also expressed doubts about the official death toll, stating that he believes it to be much higher than the reported statistics.

Deputy Health Minister Mohammad Tavakoli also warned about the potential for hospitals to be overrun, saying that a new peak is looking likely. He said that in Tehran, all hospitals are already finding it difficult to cope with the situation – emphasizing that this is not just state hospitals, but also private and non-government ones.

It has been reported that already patients are being put in hallways and corridors while they wait for a bed to be made available – either through a patient discharge or a death. Medical experts are warning that the 200 daily deaths could very soon double or triple if the situation is not brought under control.

#Iran: The People’s Mojahedin Organization of Iran (PMOI-#MEK) announced this afternoon, October 7, 2020, that #Coronavirus has taken the lives of more than 117,900 in 450 cities across Iran. #Covid_19 https://t.co/tGgKAANWUT pic.twitter.com/NkvNZhPTvf

Tehran is the epicenter of the crisis and the situation got drastically worse as restrictions were lifted. Furthermore, the medical workers are overworked and many are becoming fatigued and exhausted. At a time like this, medical workers need to be on top form to deal with the pressures of the pandemic, but they are being overworked and are subsequently more vulnerable to becoming ill themselves.

Medical and scientific experts warned that the reopening of schools would result in a surge of infections, and it looks like they were right. However, the regime ignored their advice and the people are now paying the price.

The regime’s handling of the Coronavirus outbreak is not just horrific, it is criminal too.

Mrs. Maryam Rajavi the President-elect of the National Council of Resistance of Iran’s (NCRI): While the regime officials report overcrowded hospitals and a large number of helpless patients waiting in queue to be admitted, especially in Tehran, Khamenei is not giving any money to combat the Coronavirus.