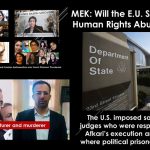 MEK: Will the E.U. Speak Up on Human Rights Abuses in Iran?

Written by Mohsen Aboutalebi on October 4, 2020. Posted in NEWS 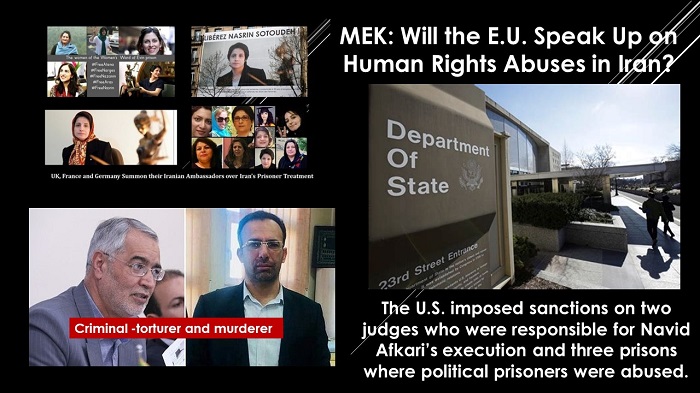 Iranian community supporters of the NCRI and (PMOI / MEK Iran), giving support to the U.S. sanctions, but wanting more pressure to be exerted on the regime by both Europe and the U.S. in relation to “regional imperialism and its domestic crackdown on dissent.’’

Will the European Union stand up for the oppressed Iranian people or support the terrorist focus of the Iranian regime?

The U.S. revealed it would impose more sanctions on the Islamic Republic of Iran. This time, the target is two judges who were responsible for Navid Afkari’s execution and three prisons where political prisoners were abused. These most recent measures give the U.S. administration more power to exert pressure on the regime. It has started with sanctions against 24 individuals who have been linked with Tehran’s nuclear, missile, and conventional weapons programs.

This will be the first time that the United States will impose sanctions on judges and courts in another country for human rights abuses.https://t.co/56GxzW33G9

Human rights issues have also become more prevalent after the announcement of the execution of Afkari. It caused international outrage, especially as Afkari’s sentence was allegedly based on forced confessions. However, despite the international community’s appeals, the Iranian judiciary decided to go ahead with the execution.

The European community believes that exerting pressure on Iran is not a successful tactic and achieves little. The country has just continued unabated with “nuclear development, regional imperialism, and so on.” French President Emmanuel Macron brought this concern up in his speech on Tuesday to the UN General Assembly.

He reminded the gathering that France, the United Kingdom, and Germany would persist in their stand on the nuclear deal “with all its attendant financial benefits for Iran.” Macron did not mention human rights abuses in Iran. He also did not comment on whether his country and his European allies (E3) would support any sanctions related to human rights violations committed by the Iranian regime or whether the group would go ahead with any plans to formally denounce the Afkari execution and other known human rights abuses.

At some point, the E3 had planned to summon ambassadors so that they can present their concern for Iran’s malicious treatment of the People’s Mojahedin Organization of Iran (PMOI / MEK Iran) activists and political prisoners which took place after nationwide uprisings leading to peaceful protesters like Afkari who were arrested. Iranian ex-pats and those who support democracy in Iran are cynical that the E3 will do anything at all and will continue to appease the regime while the U.S. administration exerts more pressure.

There have been several public rallies taking place in European cities and outside the White House, organized by Iranian community supporters of the NCRI and (PMOI / MEK Iran), giving support to the U.S. sanctions, but wanting more pressure to be exerted on the regime by both Europe and the U.S. in relation to “regional imperialism and its domestic crackdown on dissent.’’

WATCH | Alireza Jafarzadeh (@A_Jafarzadeh), the NCRI-US Deputy Dir, speaks at the rally held by the DC-area Iranians "to support the restoration of all #UNSC sanctions & call for recognition of the Iranian ppl's struggle for a #FreeIran," on Sept 22, 2020.https://t.co/XQZTLv0zI5

One of the key demands by those who oppose the regime is to force an investigation into the 1988 massacre of 30,000 protesters. Groups like the People’s Mojahedin Organization of Iran (PMOI / MEK Iran), which lost many members and supporters in the massacre want these crimes against humanity to be at the forefront and investigated and action taken against those found to be accountable for the massacre. If this does not happen soon more massacres may occur as the regime can see that there have been no international objections to the 1988 massacre. So far, it is only the U.S. that has shown concern about Iran’s actions.

A well-known political prisoner and human rights defender, Narges Mohammadi, wrote in an open letter last week complaining about an increase in restrictions on her and other prisoners. Her letter said, “the regime’s clear message that it knows no legal, logical or religious bounds in denying the rights of dissidents.”

Recently, political prisoner, Nasrin Sotoudeh, a well-respected human rights lawyer, was taken to hospital due to health concerns due to her hunger strike which had lasted more than five weeks. She was protesting for more freedom for those held as political prisoners. Unfortunately, the regime has done little so far because of hunger strikes. The regime has even suggested that as well as not offering any concessions it was going to go ahead with even more executions.

A religious cleric was recently caught saying in a media interview that “All protesters are moharebeh,” or persons who have waged war on God. “They must be tortured to death. Their limbs must be amputated, and they must be violently executed at the site where they committed the crime so that no one would dare to do such a thing again.”

Now there is no guarantee that the human rights violations are going to get the attention they should which is going to threaten the chance for democracy to ever be installed in Iran.

Mrs. Maryam Rajavi the President-elect of the National Council of Resistance of Iran’s (NCRI): We urge all governments and international bodies to stand with the people of Iran in this historic showdown against the greatest threat to world peace and security. The resolution by a majority in the US Congress provides a credible model for all governments to follow. Criminal -torturer and murderer.

We urge all governments & int’l bodies to stand with the people of #Iran in this historic showdown against the greatest threat to world peace &security. The resolution by a majority in the US Congress provides a credible model for all governments to follow #FreeIran2020 pic.twitter.com/IwjNjT8ecf