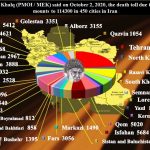 Written by Jennifer Jones-Kelley on October 3, 2020. Posted in NEWS 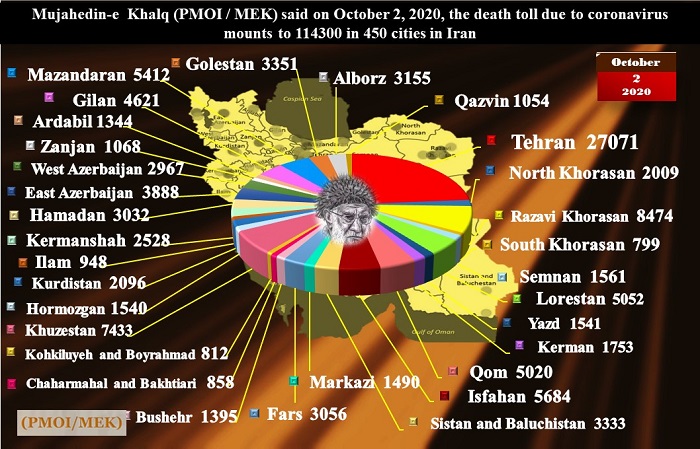 More than 114,300 people in 450 cities from all 31 provinces in Iran have died from Covid-19 as of Friday, October 2, according to the latest report from the People’s Mojahedin Organization of Iran (PMOI / MEK Iran). This number stands in contrast to the regime’s official confirmed death toll of 26,567, which represents approximately one-fifth of total coronavirus fatalities.

More than 114,300 people have died of the novel #coronavirus in 450 cities checkered across all of Iran's 31 provinces, according to the Iranian opposition PMOI/MEK.

Deputy Health Minister Ghasem Jan Babaie said on Friday that many of the country’s coronavirus deaths could have been prevented, according to a report published in the state-run Hamshahri daily. He also expressed concern that overcrowding in hospitals will soon lead to a lack of resources for other sick patients. “If the number of Covid-19 patients increases, our hospitals will not be able to address this issue and other patients, such as cancer, heart, and brain stroke patients will suffer,” he said.

On Friday, Minoo Mohraz of the National Coronavirus Combat Taskforce (NCCT) said that Iranians “should anticipate” this scenario in remarks carried by the semi-official ISNA. “There is a possibility of the daily death toll increases to 600 to 700,” she said. “When the number of patients, and especially those in dire conditions begin to increase, we should anticipate a rise in the death toll, too.”

The Deputy of Health at Ilam Medical Sciences University cited dire conditions in Ilam Province on Friday. “With“ the unprecedented increase of hospitalized cases, we’ve had our worst Covid-19 day in this province since the beginning of the outbreak,” he said, according to the official IRNA.

“On October 1, we had 180 new hospitalized cases, which is unprecedented.”

The Dean of Tabriz Medical Sciences University reported that all counties in Eastern Azerbaijan Province are now red zones and 1,050 Covid-19 patients are currently hospitalized, according to ISNA. “There are 230 patients in ICU, 120 of which are under ventilator support. In the inspections we had today, the sectors of Ahar and Haris were filled with Covid-19 patients,” he added.

744 patients are currently hospitalized in Qom Province, according to the Dean of Qom Medical Sciences University. The Ministry of Intelligence and Security (MOIS)-affiliated Mehr news agency quoted the dean on Friday as saying, “There are 744 people with coronavirus symptoms hospitalized in Qom’s medical centers, and 132 of them are in critical conditions,” the dean added. “In the past 24 hours, 13 patients who had tested positive for Covid-19 lost their lives.”

Over 114,300 people have died of the novel #coronavirus in 450 cities checkered across all of #Iran’s 31 provinces, according to reports tallied by the Iranian opposition PMOI/MEK as of Friday afternoon local time, October 2.https://t.co/fX9Q9Lx9OA

The Dean of Jondishapur Medical Sciences University in Khuzestan Province reported on Thursday that eleven counties in the province are red zones and another four are orange zones, according to ISNA.

“The situation of coronavirus death cases is very alarming and in the past few days, we’ve witnessed the passing of young and mid-age people,” he added.

The coronavirus crisis has taken a heavy toll on Iran’s healthcare workers, sickening more than 20,000 nurses, killing 300 medical workers, and further straining Iran’s already overburdened healthcare system. Alireza Zali, the head of the NCCT in Tehran said that 6,000 doctors and nurses had contracted Covid-19 in Tehran alone, according to the Revolutionary Guards (IRGC)-affiliated Javan daily.

“Our workforce is tiring, and we need new staff to counter the Covid-19 outbreak,” he added.

President-elect of three National Council of Resistance of Iran (NCRI) Mrs. Maryam Rajavi expressed her sympathy to the victims of the coronavirus in Iran and condemned the Iranian regime for its inadequate response to the crisis.

Khamenei & Rouhani do not pay the price to fight the #coronavirus. They exact the price from the lives & pockets of the people. Khamenei has usurped a trillion dollars’ wealth of the people & has refused to spend it for the minimum needs of the people& sends them to work #Iran

The MEK believes that the Iranian people’s suffering will not end until the corrupt regime has been replaced with a free and democratic government.