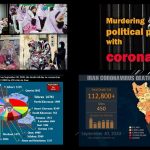 Written by Esmail Mohades on October 1, 2020. Posted in NEWS 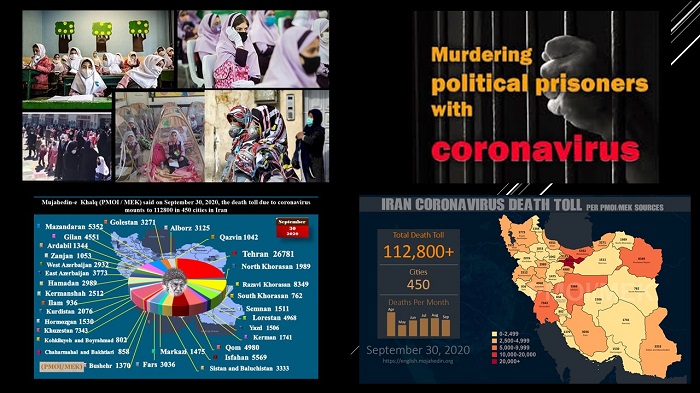 The mullah’s regime is hiding the truth by saying the official death toll is just, about a fifth of the true figure, by (PMOI / MEK Iran).

According to the People’s Mojahedin Organization of Iran (PMOI / MEK Iran), more than 112,800 people have become casualties of COVID-19 in Iran and have lost their lives, but the regime is hiding the truth by saying the official death toll is just 25,986, about a fifth of the true figure.

Mrs. Maryam Rajavi, the President-elect of the National Council of Resistance of Iran (NCRI), said: “The spread of the Coronavirus catastrophe, which, according to the regime leaders, has put the whole country in a red situation, and the number of infected and mortalities are increasing every day, is the result of the criminal policies pursued by Khamenei and Rouhani

#MaryamRajavi President-elect of the National Council of Resistance of Iran (#NCRI): The abnormal surging trend of the number of #coronavirus victims in #Iran is a product of the criminal policies of Khamenei and Rouhani. pic.twitter.com/nhT3J1uI3U

The estimated COVID-19 death toll in selected provinces include:

Report by #NCRI: “The mullahs’ performance in countering #coronavirus cannot be described as merely irresponsible. Evidence points to a strategy to kill the people in order to preserve the regime. This is what the #MEK #Iran calls the strategy of causing mass human casualties.” pic.twitter.com/KATWB8ZczT

Health Minister, Saied Namaki, said on Tuesday that within 3 weeks the statistics for COVID-19 infections is likely to double. One of the worrying places is Tehran as the cases have grown so large health services are suffering.

A senior ICU expert in Tehran’s Masih Daneshvari Hospital reported that “There are no empty ICU beds and patients are waiting in long lines even to be accepted into emergency sections.

All ICU beds in government hospitals are filled and if I contract the virus today there is no ICU bed even for me who has worked in this branch for years.

Report by #NCRI: “The mullahs’ performance in countering #coronavirus cannot be described as merely irresponsible. Evidence points to a strategy to kill the people in order to preserve the regime. This is what the #MEK #Iran calls the strategy of causing mass human casualties.” pic.twitter.com/KATWB8ZczT

Apart from the dire situation regarding hospital beds, there is also a shortage of drugs. Many victims of COVID-19 are trying to purchase their own drugs. Iranian produced Remedesivir costs 80 million rials (around $270) on the open market, but in government hospitals, the price is just 7 to 12 million rials (around $24 to $40).

In the last 24 hours, 27 patients have died of probable Covid-19 symptoms. “Currently we have 1000 Covid-19 patients hospitalized in East Azerbaijan province. This is a new record and the number continues to rise,” said the deputy dean of East Azerbaijan Medical Sciences University on Tuesday, according to the semi-official ISNA news agency.

In Yazd, the spokesperson of the local Medical Sciences University said the past 24 hours was a bad day for Yazdi locals. “Nine Covid-19 patients died and 57 were transferred to ICUs. Some are in dire conditions,” the spokesperson added on Monday, according to the Mehr news agency, an outlet linked to the Ministry of Intelligence and Security (MOIS).

In Markazi (Central) province, the dean of the Arak Medical Sciences University said Tuesday brought a new Covid-19 death rate record for this province. “We have registered 13 Covid-19 deaths and 259 new cases in the past 24 hours,” the dean said, according to ISNA.

Over the past 40 years, the clerical regime has taken countless lives among the people of #Iran, including the 1988 massacre & sending a million to killing fields during war against Iraq. Today, due to the policies of Khamenei & Rouhani, #Covid19 has claimed numerous victims pic.twitter.com/UTTXPuuZAO

Mrs. Maryam Rajavi President-elect of the National Council of Resistance of Iran (NCRI): While adding in salt into the grieving people’s injury, Khamenei did not make the slightest contribution from the $1 trillion plundered wealth of the Iranian people in the institutions he controls.