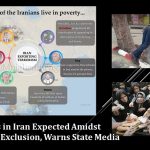 Written by Esmail Mohades on September 30, 2020. Posted in NEWS 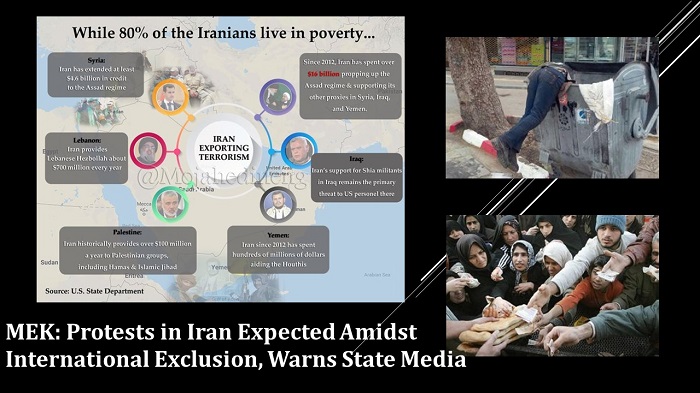 Maryam Rajavi: We believe it is possible to eradicate poverty, unemployment, shanty dwelling, water shortage, and environmental calamities. But, before anything else, the trampled political rights, specifically the right to sovereignty of the Iranian people, must be restored and revived.

The Iranian regime has few friends around the world, except for those terrorists it funds using loot stolen from the Iranian people. Its developing international status as a pariah state is also likely to contribute to further protests by ordinary Iranians furious at their growing impoverishment. The state-run media have been quick to issue warnings about the tinderbox that is Iranian society. Some examples of these warnings follow.

“A glance at what we witnessed in forms of protests in recent years shows that these protests started in areas where people are suffering from poverty and have difficulties earning their living wages. The economic pressure that lower social classes endure is unbearable. We should be careful that they do not lose their tolerance because this could have social and security consequences for the regime.” (reported by the Arman daily, a state-run media site, issued on Sunday.)

"It is very clear that poverty in Iran is the flip side of the coin of corrupt policies of the government and growing massive systematic embezzlement of government institutions."#Iran#Povertyhttps://t.co/e5UZWJ4JX9

In response to this desperate situation, people have no other option but to resist a decent and better life. The People Mujahedin-e Khalq (PMOI / MEK Iran) the main opposition to the mullahs regime and their network in Iran called MEK resistance units are mobilizing people to restore their rights.

“The social and national challenges have become so diverse and massive that any justification or trick can no longer conceal them. There is an inefficiency (lack of ambiguous plans and goals) of macro-management, which is the bedrock of all kinds of social and national challenges without prospects. Thus, we could safely say that a ‘fundamental national issue or concern’ in no way matters for politicians, officials, clergymen, and those seeking power.” (reported by the Ebtekar daily on Sunday.)

During the past few months, The National Council of Resistance of Iran (NCRI) and also the MEK’s networks inside Iran covered the news of protest movements, daily gatherings, and strikes of workers, farmers, teachers, pensioners, nurses, etc… MEK resistance units played an important role to form and direct those growing protests.

The Haft Tappeh workers have vowed not to end their strike until the following demands are met, as previously reported by the #MEK: Immediate payment of delayed workers’ wages; Renewal of workers’ insurance benefits;https://t.co/Z8XUw9YfBl #Iran pic.twitter.com/sEYI5ST7Wk

Ebtekar warned the regime of prioritizing the retention of its own power over managing the economy efficiently. “Security without efficient macro-management is an ‘unpatriotic dream,’ according to the website. Ebtekar went on in the article to say that the regime faced an increasingly restive society at the same time that it was becoming increasingly isolated internationally.

“The EU’s biased statement on human rights against Iran has been issued while political observers believe that this statement is a continuation of preparing the ground for further agreements like the JCPOA,” said the state-run Siasat-e Rouz. “This biased statement means the EU gives the green light to the United States. Of course, this alignment has already been reflected in the form of European political stances and statements on issues such as human rights, missile capability, and Iran’s regional role,” continued the article in Siasat-e Rouz.

Reporting by PMOI/MEKIran, September 1st, 2020—The workers in Iran's oil and petrochemical industries and power plants…

MEK reported mullah‘s regime is funneling billions of dollars in support of terrorism abroad while tens of millions of Iranians suffer in poverty. The Iranian opposition coalition NCRI had unveiled Tehran providing over $100 billion to maintain the Assad regime in power.

President-elect of the National Council of Resistance of Iran (NCRI), Mrs. Maryam Rajavi, has frequently pointed out that the Iranian regime is incapable of reform. It is entrenched in its own catastrophic inability to govern Iran properly. The regime can only be overthrown. Unless this happens the regime will continue stealing, lying, threatening, repressing, arresting, and executing. ‘Nor will it let up on misogyny, religious discrimination, terrorism, and warmongering,” says Mrs. Rajavi.