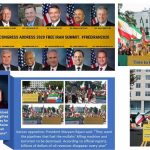 Written by Amineh Qaraee on September 28, 2020. Posted in NEWS 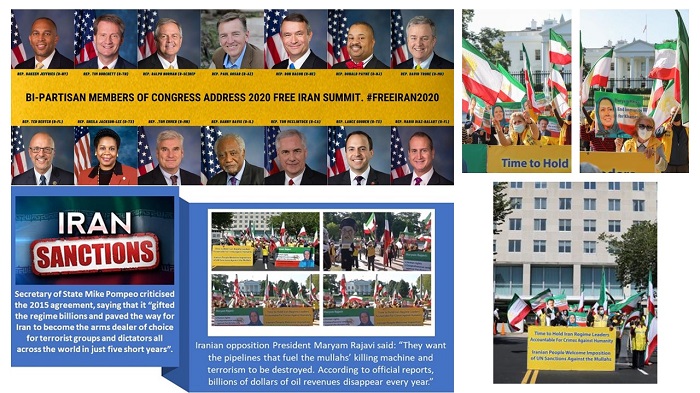 The MEK and NCRI supporters spoke out on their support of UN sanctions against Iran and for the United Nations Security Council to re-impose the six UN resolutions against the clerical regime of Iran.

On the 22 September 2020 supporters of the People’s Mojahedin Organization of Iran (PMOI / MEK Iran) and the National Council of Resistance of Iran (NCRI) congregated in protest outside of the US Department of State, the White House, and the United Nations as the UN General Assembly took place. There is usually an annual event, with around 10,000 MEK supporters in attendance, to oppose the speech of Iran’s President Rouhani at the UN General Assembly. Due to coronavirus restrictions, it was not possible for this great number to attend. However, those who were able to attend represented the will of the Iranian people and spoke on their behalf.

During the demonstrations, The MEK and NCRI supporters spoke out on their support of UN sanctions against Iran and for the United Nations Security Council to re-impose the six UN resolutions against the clerical regime of Iran. These measures are necessary in order to stop the regime from committing further crimes against humanity with total impunity.

🇺🇸Hear the Iranians @antonioguterres
Outside the #WhiteHouse rallying their perspective of a FREE IRAN to the world leaders at UN today 🇺🇳pic.twitter.com/rnM5CXneYk Along with the Iranian Opposition they say #No2Rouhani

In a speech given on the eve of the 2020 UN General Assembly, President-elect of the NCRI, Maryam Rajavi, shared the same message: “Faced with executions and massacres, the people of Iran urged the United Nations, and the UN Security Council, in particular, to re-impose the six UN resolutions against the clerical regime in Iran. Otherwise, Khamenei will continue to ravage the nation as his regime’s survival depends on murder and suppression.

On the eve of the UN General Assembly summit and on behalf of the Iranian people and Resistance, I would like to draw the attention of all governments and international bodies to three fundamental issues: #NoImpunity4Mullahs #Iranhttps://t.co/ytJG4tLQhz pic.twitter.com/9Ha0VXtZJn

The MEK and NCRI supporters brought signs and banners and chanted in protest of President Rouhani’s speech and in support of the UN sanctions, as well as accountability for the heinous acts of suppression committed by the Iranian regime. One such chant that was repeated during the demonstration was: “Rouhani no no no, Rajavi yes yes yes. Democracy, freedom, with Mariam Rajavi. Change change change, regime change in Iran.”

One representative of the Iranian community supporters of the MEK who addressed the rally stated: “We are here to welcome the restoration of all the UN sanctions of the regime in Iran and call for recognition of Iranian people’s struggle for freedom. We are here to announce that the people of Iran support the MEK and firm policy on a regime that is responsible for the execution, massacres, and terror against its own citizens and abroad.”

#Iranian American Communities supporters of The #PMOI #MEK #Iran, in the US, rally in front of WhiteHouse, Sept 22, 2020, to support the US’s call on the UN to SnapBack all sanctions on dictators ruling Iran and said EU must follow. pic.twitter.com/MGiuF73T8o

Mrs. Soona Samsami, NCRI US representative spoke in front of the US Department of State, she said: “It’s very clear that the clerical regime is at war with its people and at war with the world community, that’s why we need the strongest condemnation of human right’s violation in Iran, immediate measure to hold the regime accountable and sanctions imposed on the Iranian regime. Now that the Iranian people and MEK resistance units are mobilizing uprising, from December 2017 to November 2019 and January 2020, this has dispensed all illusions about the stability of the clerical regime.”

It is greatly important the UN shows support for the people of Iran who continue to struggle for their freedom, democracy, and human rights. The MEK and NCRI supporters who demonstrated during the UN General assembly were the representatives of the Iranian people living in Iran who have their voices silenced by the oppression of the regime. The UN must impose all sanctions and the six UN resolutions in order to protect Iranian citizens and hold the regime accountable for their destructive actions.