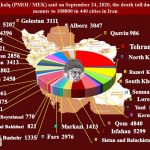 Written by Jennifer Jones-Kelley on September 25, 2020. Posted in NEWS 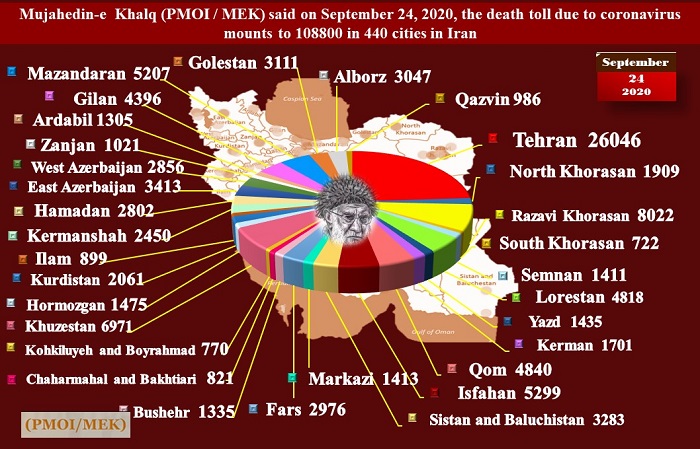 MEK: Mullah’s regime officials in Iran acknowledge that the entire country is red with respect to the pandemic.

More than 108,800 people in 440 cities from all 31 provinces in Iran have died from Covid-19, the disease caused by the novel coronavirus, according to a report released Thursday by the People’s Mojahedin Organization of Iran (PMOI / MEK Iran). The regime’s official death count of 25,015 accounts for only about one-fifth of the total fatalities.

Regime President Hassan Rouhani has once again come under fire for the government’s mismanagement of the coronavirus crisis in Iran. While hospitals overflow and healthcare workers go unpaid, hospital deans and regime officials are asking where the one billion euros allocated for coronavirus relief have been spent.

Over 108,800 people have died of the novel #coronavirus in 440 cities checkered across all of #Iran’s 31 provinces, according to reports tallied by the Iranian opposition PMOI/MEK as of Thursday afternoon local time, September 24.https://t.co/ERrJcCkp8Y

Health Minister Saeed Namaki expressed his exasperation with the regime in comments published in Thursday’s edition of the state-run Hamshahri daily. “A heavy fall season will be coming. The wave of a strong attack is forming,” he said. “It has been months that we have only received a small portion of the one billion euros that [Khamenei] agreed to provide from the National Development Fund. I don’t know what is more important? I have remained silent for people to not get angry. My ill colleagues are asking me what happened to that one billion euros?”

More than 108,800 people have died of the novel #coronavirus in 440 cities checkered across all of Iran's 31 provinces, according to the Iranian opposition PMOI/MEK.

Thursday’s Tabnak daily published frustrated remarks from Deputy Health Minister Iraj Harirchi. “Our health professionals have not been receiving their paychecks and overtime work. Their paychecks are even less than the minimum wage set by the Labor Ministry. The increasing trend of this virus in the provinces of Isfahan, East Azerbaijan, Qom, and Kohgiluyeh & Boyer Ahmed can be described as explosive,” he said.

At a Wednesday session at the Majlis (Parliament), Health Commission Chair Hossein-Ali Shahriari questioned why coronavirus relief funds have not been spent fighting the coronavirus. “Of the one billion euros from the Development Fund around 27 percent has been allocated to the Health Ministry. Even that amount has been decreased from the Health Ministry’s usual budget.

It appears that the money has been spent somewhere else,” he said. “Our medical professionals are tired. Their paychecks have been delayed for six, eight, and even ten months. Arrangements were made for the hiring process of new staff to be sped up. You are not paying those who are currently at work, then you say you want to add 10,000 beds?! There’s only one thing right now and that is recommendations for people to use masks,” he added, according to the regime’s state TV.

Rouhani once again evaded responsibility for the regime’s bungled response to the pandemic by blaming the Iranian people for their own deaths. In a recent meeting with the head of the National Coronavirus Combat Taskforce (NCCT), Rouhani said: “Unfortunately, the medical professionals’ expectations from people to abide by health protocols have not been met.”

He then evaded the question of why healthcare workers have gone unpaid for months while coronavirus relief funds remain unaccounted for, saying, “From the beginning of this pandemic the government has prioritized providing the needs of the health industry and our medical professionals. This policy will continue.”

Finally, Rouhani took the time to make his usual veiled comments about the (PMOI / MEK Iran). “Our success in confronting Covid-19 can be compared to advanced countries. Well, there are some people living abroad that are very angry about the fact that we, too, are confronting the novel coronavirus while continuing our economic and cultural activities, and holding our religious ceremonies,” he said, referring to MEK members living at Ashraf 3 in Albania. “They wanted us to shut down the country… It is obvious from their anger what they were thinking about… all those people living abroad and [dissident] channels should know that requests to launch industrial activities have increased by 33 percent in the past six months in comparison to last year.”

As the regime officials in Iran acknowledge that the entire country is red with respect to the pandemic, Khamenei says that it is the people who must do their duty in fighting the disease, adding salt to the injury of millions of bereaved and sick Iranians and their families.

As the regime officials in #Iran acknowledge that the entire country is red with respect to the pandemic, Khamenei says that it is the people who must do their duty in fighting the disease,adding salt to the injury of millions of bereaved & sick Iranians &their families #Covid_19