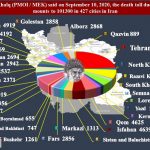 Written by Amineh Qaraee on September 11, 2020. Posted in NEWS 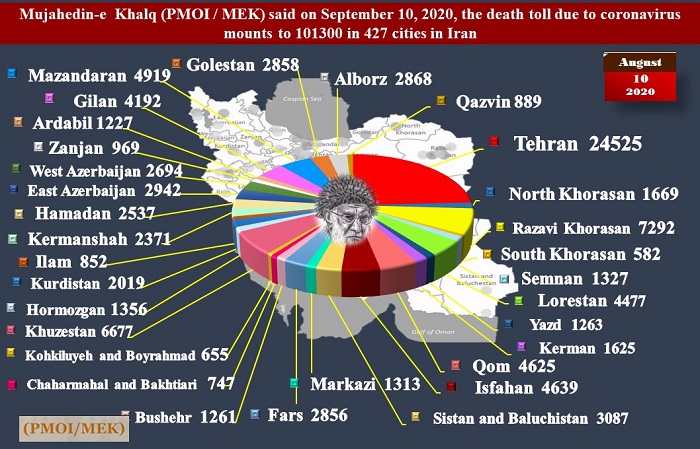 According to sources from the People’s Mojahedin Organization of Iran’s (PMOI / MEK Iran) internal network, Covid-19 has claimed the lives of over 101,300 Iranian people over the last seven months. The real figures could in fact be even more, as insiders of the Iranian regime have approximated the actual numbers to be as much as four times higher.

The Iranian regime has attempted to hide the number of deaths on an international level, wishing to appear as though they are capable of successfully handling such a crisis. According to the World Health Organization, the two countries in the world with the highest coronavirus death toll are the United States, with 188,000 deaths, and Brazil, with 126,000. The regime falsely maintains that the death toll in Iran is 22,798 deaths. The real figures would suggest that, at over 100,000, Iran has at the very least the third most deaths due to coronavirus in the entire world.

The People’s Mojahedin Organization of #Iran (PMOI/#MEK) announced on Thursday, September 10, 2020, that the #Coronavirus death toll in 427 cities had passed 101,300.
https://t.co/b0WUFPsuJf

The scale of the devastation in Iran was entirely preventable had the regime taken the necessary action. The Supreme Leader, Ali Khamenei, has said that the regime used Covid-19 as an oppressive tool. There have been two major uprisings by the Iranian people demanding regime change over the past two years. The regime hopes that the devastating effects of coronavirus on the Iranian people will cause them to be preoccupied and passive, avoiding any further uprising.

Under the mullahs’ rule, every natural calamity and every preventable problem from the #Coronavirus (#COVID19) to floods to earthquakes, turn into a major disaster. #Iran pic.twitter.com/g1xbL5aAeb

The regime concealed Iran’s coronavirus status for two months at the beginning of the outbreak, refusing to acknowledge that it had spread in Iran. They maintained that everything would continue on as normal in Iran and refused to put even the most basic of precautions in place.

It is clear that the mullahs’ regime was aware of the coronavirus outbreak in Iran for at least two weeks before they officially acknowledged it on 19 February 2020 after two Covid-19 deaths were confirmed in Qom. The regime downplayed the dangers of coronavirus and encouraged the Iranian people to congregate in celebration of the 1979 revolution anniversary on 11 February 2020. They also enforced attendance to the sham parliamentary elections on 21 February 2020.

On 3 March Khamenei stated: “This is not such a major catastrophe and we have had more significant ones.” He added that coronavirus is a “passing issue” and is nothing “exceptional”.

Hassan Rouhani, Regime President, persisted that “80 to 85 percent of those who contract the virus do not realize it at all and will get well.” Further to this, many Iranian officials announced that they had tested positive for Covid-19 in order to claim that it is not a serious illness that requires quarantine.  Rouhani insisted that quarantine measures were not necessary and argued that this was an anti-revolutionist conspiracy to shut down the economy.

The prosperity of the regime was prioritized by Khamenei and Rouhani above all else, including the welfare of the Iranian people. Work in Iran was quickly resumed with no indication that the virus was slowing. Khamenei even stated that production must resume “whatever the price.” Rouhani further clarified the real concerns of the regime. He said that if 2-3 million people die from coronavirus this is better than 30 million hungry people taking to the streets in protest. The mullahs fear of potential civil unrest and their need for self-preservation comes before the lives of the Iranian people.

The Iranian regime refused to allocate the required funds needed to tackle coronavirus. This was not due to a lack of available funding. The Iranian Resistance had revealed that Khamenei’s huge financial institutions, including the Astan-e Quds Razavi and the Execution of Imam Khomeini’s Order (EIKO), are in possession of billions of dollars of assets. Khamenei refused to use these funds to contribute towards Covid-19 measures. The regime did not grant any further wages to Iran’s medical professionals and actually delayed the nurse’s salaries for months without accountability.

This disturbing approach to coronavirus is not the result of a simply incapable regime, rather it is a methodical and deliberate approach to handling the pandemic. According to a report on 22 July 2020 by ICANA, the regime’s Majlis (parliamentary) news agency, one MP said: “They seem to have sworn to kill all the people.”

According to #MEK #Iran the death toll from #COVID19 stands at 92,300. “if the upcoming gatherings such as university entrance exams and Muharram mourning ceremonies are not controlled we will have an increased outbreak in Autumn. https://t.co/5MEwUs9Zet via @stopfundamentalism pic.twitter.com/ape6sfW9QM

There have been three key decisions made by the regime which illustrate the deliberate organization of high-risk situations that put the Iranian people in danger of coronavirus.

The first was organizing college entrance exams, which across the world have been postponed or held online. One million volunteers participated without regime officials imposing any safe distancing measures or protocols to protect those in attendance.

Secondly, the annual Muharram mourning gatherings went ahead as normal. Crowds congregated publicly under the insistence of Rouhani at a pivotal time when medical experts warned about the deadly consequences of a new wave of coronavirus in the following four to six weeks.

Lastly, the schools were prematurely reopened. This was met by protests and even opposition from regime insiders but still went ahead. A member of the Coronavirus Task Force Committee, Minoo Mohraz, cautioned that “schools are the most suitable places for the spread of coronavirus.” The state-run Resalat daily wrote on 6 August: “Maybe this does not have to be mentioned but reopening schools and students physically taking part in their classrooms is a genocide.”

According to #MEK #Iran the death toll from #COVID19 stands at 92,300. “if the upcoming gatherings such as university entrance exams and Muharram mourning ceremonies are not controlled we will have an increased outbreak in Autumn. https://t.co/q4xLuR1WBc via @stopfundamentalism pic.twitter.com/Ct9ThfRbnk

The regime has attempted to cause mass casualties while hiding this from the rest of the world by underreporting the number of deaths. The MEK, with its vast insider network across Iran, has been able to publish daily information that has uncovered the devastating reality of coronavirus in Iran.

Mostafa Moein, former Health Minister and head of the regime’s Medical Council, described this: “So far, the pervasive coronavirus crisis has been a cover for the society’s demands… This situation is like fire under the ashes that requires more attention from the officials to prevent high-risk events in the future.”

Maryam Rajavi, President-elect of the National Council of Resistance of Iran (NCRI), addressed the appalling inaction of the Iranian regime and the growing death toll: “This scale of the death toll is the immediate result of the criminal and inhuman policies pursued by Khamenei and Rouhani. This was entirely preventable. They are now producing a more massive catastrophe by sending children to school.”

She added: “Khamenei and the Revolutionary Guards do not spend even a fraction of the hundreds of billions of dollars they have plundered from the Iranian people to combat the Coronavirus. Nor do they even pay the salaries of nurses and doctors and medical staff who work around the clock and risk their lives and those of their families to save the lives of patients. Even though the regime’s experts and mid-level officials unanimously describe the opening of schools to be dangerous, by causing mass casualties, the regime seeks to create a barrier against the crisis of being overthrown and overshadow popular uprisings.”