MEK Iran: Iranian Mullahs and Agents of Lies in Albania 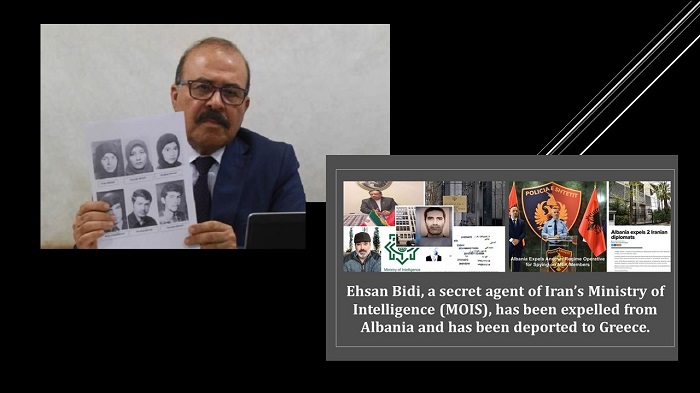 Massoud Ahmadi, a member of The People’s Mojahedin Organization of Iran (PMOI / MEK Iran), who now lives in Ashraf-3, Albania, lost his brothers and sisters at the hands of the Iranian regime because they supported the MEK. He was interviewed by the website, Iran Probe, and showed not the only concern for the regime’s lies but also voiced concern about what Iran’s regime was doing in Albania.

He introduced himself in the interview as a supporter of the MEK, which is the democratic opposition in Iran.  He said that he is worried about the regime’s motives for allowing families of MEK members who live in Ashraf 2 to come to the establishment from Iran to visit them. His experience with his own family many of whom many were murdered by the regime he is afraid could be repeated at Ashraf 3.

The main reason for losing his brothers and sisters was because they supported the MEK and refused to give up their political beliefs. The United Nations knows who his deceased family members are and has already questioned the regime about their deaths, but the regime refuses to admit what happened to them and in fact, says they are still alive.

Massoud said a similar thing happened when Amnesty International interviewed him at Ashraf 3 when the agency was shocked to find that the regime had lied about the fate of his siblings. Massoud said the world knows all about the mullahs and their human rights abuses but does nothing about it. Another serious event took place last November when Iranians were out on the streets because they were objecting to being in poverty and suffering hunger.

As time has progressed the regime has faced more opposition which they will not accept. They know only too well if they concede defeat at any point they may have to face up to their crimes and be punished in a way any other criminal would be.

Massoud said one of his greatest fears was that there might be a repeat of what happened when Ashraf was based in Iraq. The regime allowed families out of Iran to visit their relatives but some of these people had been engaged as terrorists. If this happened in Albania it could be disastrous for the MEK.

Olsi Jazexhi, who lives in Albania, revealed in a YouTube clip that the Iranian regime gives him money. We can only guess what it is for but what we do know is that Ali Khamenei hates the MEK and what it stands for and using someone like Olsi and his accomplices to attack the MEK would be something anyone would expect of the mullahs.

Albanian people are warm and welcoming to us in Ashraf but when Olsi Jazexhi was recently interviewed by an Iranian woman who is allegedly an MOIS agent, the main point of the conversation was to work out ways of destroying the MEK forever. Massoud closed the interview at this point.

#‌Iran Regime's Desperate Conspiracies Against #PMOI/#MEK in #Albania
The clerical regime’s Ministry of Intelligence and its agents in the regime’s embassy in Albania are working under the cover of cultural activities in #Tehran and #Tirana through… https://t.co/vfSRNYkuON pic.twitter.com/TVxGJVWCyB