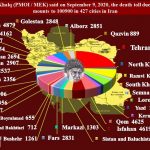 Written by Jennifer Jones-Kelley on September 10, 2020. Posted in NEWS 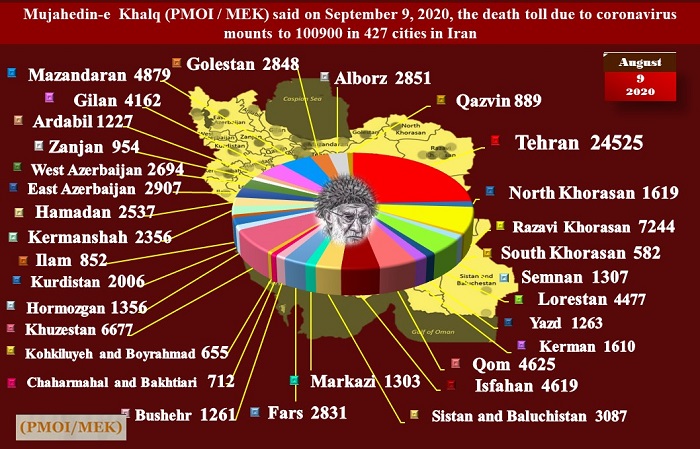 The People’s Mojahedin Organization of Iran (PMOI / MEK Iran) announced on Wednesday, September 9, 2020, that the Coronavirus fatalities in 427 cities across Iran had passed 100,900.

More than 100,900 people in 427 cities in all 31 provinces in Iran have died of Covid-19, according to a Wednesday announcement from The People’s Mojahedin Organization of Iran (PMOI / MEK Iran). The regime has confirmed 22,542 of these deaths or approximately one-fifth of the true number of fatalities.

Regime officials are facing increasing scrutiny about their decision to require schools to provide in-person instruction this fall. Opposition to the move has been widespread, with teachers, parents, public health experts, and even some of the regime’s officials condemning it as another in a series of “bad decisions.”

More than 100,900 people have died of the novel #coronavirus in 427 cities checkered across all of #Iran's 31 provinces, according to the Iranian opposition PMOI/MEK. pic.twitter.com/rFCDpm4Hhx

On Tuesday, Alef quoted National Coronavirus Combat Taskforce Member (NCCT) Minoo Mohraz in its reporting about the regime’s response to the virus. Mohraz worried that the Iranian health system will not be able to withstand the cost of the regime’s poor public health policy-making. “The number of cases has increased again. I don’t know how the government is imposing such extra expenses. ICU beds cost several million [tomans] per day. We’re just witnessing the results of bad decisions! Nurses and medical staff in hospitals have become exhausted and can’t carry on. I don’t know how this situation and these actions are justified,” she said.

Experts worry that the return to school will worsen the Covid-19 crisis and strain hospitals beyond their capacity. Doctors worry that children will spread the virus to each other at school and then return home and spread it to their families and communities. The state-run ILNA quoted Payam Tabarsi, the head of the Infectious Diseases Department at Massih Daneshvari Hospital in Tehran, in a report on this topic. He said, “If coronavirus becomes widespread and more children need to be hospitalized, we don’t have beds for them… Viral epidemics like the flu usually start from schools. Coronavirus and other viral diseases are no exception. Therefore, there must not be congregations at schools so children don’t transfer the virus to other people.”

The backlash to school reopenings has been swift and brutal, forcing regime officials to temper earlier statements on in-person requirements. On Tuesday,  the state-run ISNA broadcast remarks from regime spokesman Ali Rabii, who tried to walk back President Hassan Rouhani’s earlier directives regarding school reopenings. “The President said specifically in that session that there is no obligation to return to school. However, all the education experts were very sensitive to reopening schools,” he said. “Of course, one can use the ‘Shad’ education network, but we are emphasizing once again that there is no obligation to attend school in person. All the while, the schools are open… students need to remain in contact with the schools, be it physically or online,” he added.

On Monday, the semi-official ILNA broadcast similar remarks from Education Minister Mohsen Haji Mirzaee, who said that students must attend school either online or in-person but stressed that they were not required to physically attend classes if their families had “concerns” and wished them to attend online. “None of the state and non-state schools have the right to obligate students to physically attend class,” he emphasized.

The new statements have done little to clarify the issue for parents or students. Zahra Sheikhi, spokesperson first the Majlis (Parliament) Health Commission, explained the problem. “The many contradictions in the remarks made by officials have confused the families. Many parents say officials are changing their decision every minute and it’s not clear what they’re thinking. Many of my colleagues don’t dare send their children to school. I didn’t send my kids either,” she said, according to the state-run Hamshahri daily.

The tragic coronavirus pandemic has cast a dark shadow over our nation for the past seven months. Khamenei, Rouhani and the gangs ruling our country do not spend even a small portion of the hundreds of billions of dollars they have usurped from our nation.