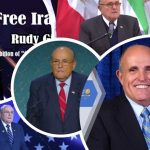 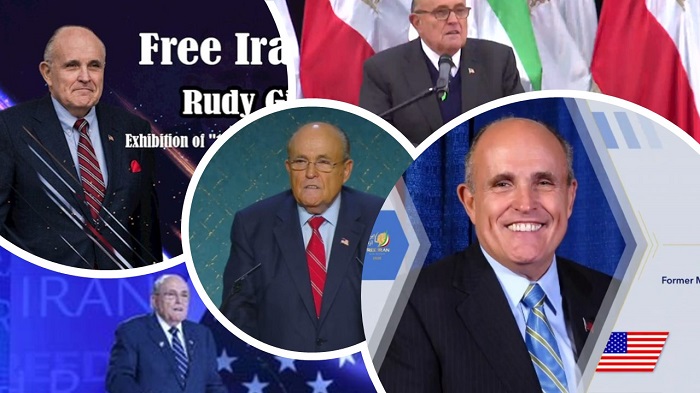 Transcript of remarks by Former New York Mayor Rudy Giuliani at worldwide internet conference focusing on the mullahs’ support for terrorism and shutting down its embassies- July 20, 2020.

Thank you very much for having me. It’s a great pleasure. Those are very, very great memories. Well, I must say, those are great memories. Well, for me those are very, very great memories, Madame Rajavi, Maryam Rajavi, for times that we’ve been together as a group, all of us. First of all, let me congratulate you on the remarkable historic achievement on Friday of the virtual conference that you held. It was well over 100 countries, over 30,000 locations, millions of people participated. And I’ve been getting texts and messages from all over the world about it. And most importantly, broadcasting it right into Iran so that the people who are oppressed can understand the single most important thing they need to accomplish regime change, which is hope. And that was deprived of them for many, many years.

But a combination of your steadfast leadership and courage of you, The National Council of Resistance of Iran (NCRI), The People’s Mojahedin Organization of Iran (PMOI /MEK Iran), and now an American government that is not a government of appeasement but a government that seeks the best for the Iranian people, where it’s starting to feel, particularly with the situation inside Iran, that freedom, which is inevitable, it’s getting closer. Because all of the conditions that I’ve observed in countries that make the leap from totalitarianism to freedom, this is what precedes it. You’ve had now two years of demonstrations and protests that have been about yes, political oppression, but also about economic oppression and about some of the simple most important things in life, the ability to feed yourself, feed your children, as well as to remain safe from just arbitrarily being shot and killed.

And the regime, when this began back in November, January, a year and a half ago, when this all began, the regime I think expected to put this out in very short order. But they were met with—there were a couple of things that were different. They were met with an American administration that didn’t do what President Obama disgracefully did, turn his back when people were just asking for some words of hope, failing the test that Ronald Reagan set back in the ’80s when he embraced Solidarity in Poland, and it was considered a critical moment. Took another six or seven years, but the critical moment for the fall of the Soviet Union, the Berlin Wall, the liberation of many of the countries that are now your strongest supporters in Eastern Europe. Because they understand liberty, freedom because they’ve had an experience with totalitarianism that’s a lot closer than Western Europe. You have those conditions now in Iran. It’s a shame that it has to be like that. But in the larger scheme of things, which is the acquisition of freedom, it’s necessary.

Thank you, Mr. Mayor.
We will never forget your support for #FreeIran2020.https://t.co/YBBy8yupEo

Up until COVID happened, the sanctions that had been imposed by the Trump regime were much more onerous, they’re much more biting and much more effective than the ones in the Obama regime, which I always felt were not really enforced properly to start with. They weren’t. And then also there was at the very end when they entered into that very, very dangerous, I believe immoral, a nuclear agreement that would have sent Iran on the path to being a nuclear power in ten years or less, they accompany that with a shipment of 1.7 billion dollars in cash. My government doesn’t transport cash. Drug dealers transport cash. Organized criminals, mafia, revolutionary groups. Governments deal with wire transfers. There’s something very wrong with this 1.7 billion dollars that Obama paid to a murderous regime. Something very wrong with it when you consider that Iran does three things with its money, right? They use some of it, and a very small portion, to feed their people. They use a lot of it to line their own pockets. And they use a lot of it to fund terrorism all over the world, which is why they are acknowledged by every government as the leading sponsor, state sponsor of terrorism in the world. So we have to assume that 1.7 billion—we don’t have to assume, we know—that 1.7 billion went in part to help the people, small part, in part to make the mullahs even richer, and then in part to kill people. Then probably kill Americans as well. That’s why I say it’s immoral.

So insightful. What could $1.7 BILLION dollars b used towards that Hussein Obama gave to Iran? Remember the $400 Million ransom paid? pic.twitter.com/gXUrPhznyL

That agreement is now over. President Trump in one of the bold moves of his administration, which he is known for, rejected it, really instituted sanctions enforced by a Treasury Department that’s serious about freedom for Iran, not a State Department and Treasury Department of appeasement that you had under Obama. And you can see what the result is. Even without other countries in Europe supporting our sanctions, even with those countries doing business with Iran, Iran is crushed economically because despite the rumors about the United States [laughs] it’s still by far the strongest economy on earth and the strongest banking system. And there’s almost no comparison—there is no comparison. If the United States wants to cut you off economically, we can cut you off economically whether you’re Russia or China or certainly Iran, which is what we did.

Democrats side with Iran.

And that led to the protests, that led to the pictures we saw of people in the streets starving. It’s a shame, you don’t want that, but you need that in order to overthrow this regime. And now, the pictures in the street and the signs about overthrowing the Ayatollah, overthrowing the mullahs, and just as importantly, the pictures of Maryam Rajavi, of MEK, NCRI, even American flags. This is what happens when a regime falls. It falls from the bottom up. The conditions are there. It’s going to happen. I don’t know when. I’d like to accelerate it. And when I say I don’t know when it’s going to happen within the foreseeable future. I’d like it to happen today because the first day that it happens in the first-day people stop dying and stop being killed, and particularly our people who are fighting for freedom.

When a qualified organization and a leadership structure does not exist, there can be no fundamental change or transformation- Speech marking the anniversary of the foundation of the People’s Mojahedin Organization of #Iran (PMOI/MEK) #FreeIran2020https://t.co/vIAXcF9Qc7 pic.twitter.com/z8u9UUWsLC

But there is something that we can add to this that would really help, and it’s an effort that we all have to make. And that is we have got to get the European governments to finally support decency, to finally support what they supposedly stand for democracy and freedom. My goodness, they went through their own revolutions to accomplish democracy and freedom. And although I may say with some degree of ethnic-national pride that it was my country that led the way on revolutions—the French Revolution followed the American Revolution—still, when you consider that in the 19th Century many, many Europeans died for freedom and then in the 20th century they died to defend freedom along with my countrymen, they should be on the side of your freedom and not on the side of greed and—we’ve got to work on that and we’ve got to isolate them and we’ve got to point that out because the more pressure we can put on Iran, the faster this will happen. I believe we’re going to have to wait a bit. It’s unfortunate.

.@RudyGiuliani: "You now have a responsibility because of your knowledge. Don’t hide your eyes. You’ve got to get the leaders of your country to stand up so you can all be proud of your country and its heritage." #FreeIran #Iran #sp https://t.co/rNJYaVUalY

I believe we’re going to have to wait a bit because the Iranian government is very, very shrewd. It spends an enormous amount of money trying to corrupt my government, and sometimes it succeeds. And we’re now having an election where one of the candidates is of course a continuation of Obama, who has made it clear that he would reinstate the corrupt agreement we had and possibly even reinstate the corrupt payments that were being made, which he was fully aware of. So, they have a lifeline. They have a lifeline to an American administration that would be as weak, as empowering for them, as they could possibly imagine, with all the same players that we had a deal with that cost unnecessary death, maybe 100 or 120 of our people when they were I believe imprisoned in Iraq and just, you know, delivered up to the tender mercies of the Iranians.

But I can assure you, the American people are too intelligent to take a big step backward. And I believe, although no one can be sure, that in November we’ll have a continuation of this administration, and I believe a continuation of the policy that’s proven to be much more effective, which is to isolate Iran, to put maximum pressure on them because they’re slaughtering their own people and others, and also to put even more emphasis now on the fact that there is an alternative, and that alternative is demonstrating itself every day, including on Friday, by being able to do what you did on Friday and what you did last year in Ashraf and the year before when we were almost bombed in Paris, these gigantic world meetings that have so much impact. You show that you can stand up for a government. You show that we wouldn’t have to delay a day. This would not be another Iraq where we got rid of Saddam Hussein and then we didn’t know what to do. This would be more like what happened in, oh gosh, going back to Italy and Germany and Japan. We got a government ready, an interim government ready. It’s not going to be imposed on anyone for any lengthy period of time, but it’s going to be there for the transition and for the elections.

Mayor Rudy Giuliani thanked Ashraf 3 residents.
“When the history of this tragic part of Iran is written, you are the heroes & you will be honored in Iran’s history.”#FreeIran#WeSupportMEK#IStandWithMaryamRajavi pic.twitter.com/OVKmZZcu3x

So, let’s continue. We have things we have to accomplish in Western Europe. We have things we still need to accomplish in the United States. Gotta get past this election in the right way. And then I think I see a very strong path. And I just expect that one morning I’m going to wake up and it’s going to be Maryam Rajavi on the phone. They’re going to say, man, you can’t believe it but they overthrew the government. That’s the way it happened with the miserable, crooked Communists, and that’s the way it’s going to happen with these insane murderers and the regime of terror will end. And all of you have participated in it, all of you. You’ve written an important chapter in how human beings strove for and obtained freedom under the leadership of a truly great woman, Maryam Rajavi. Thank you very much.