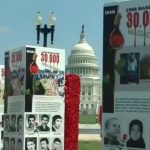 Written by Jennifer Jones-Kelley on September 5, 2020. Posted in 1988 Massacre, NEWS 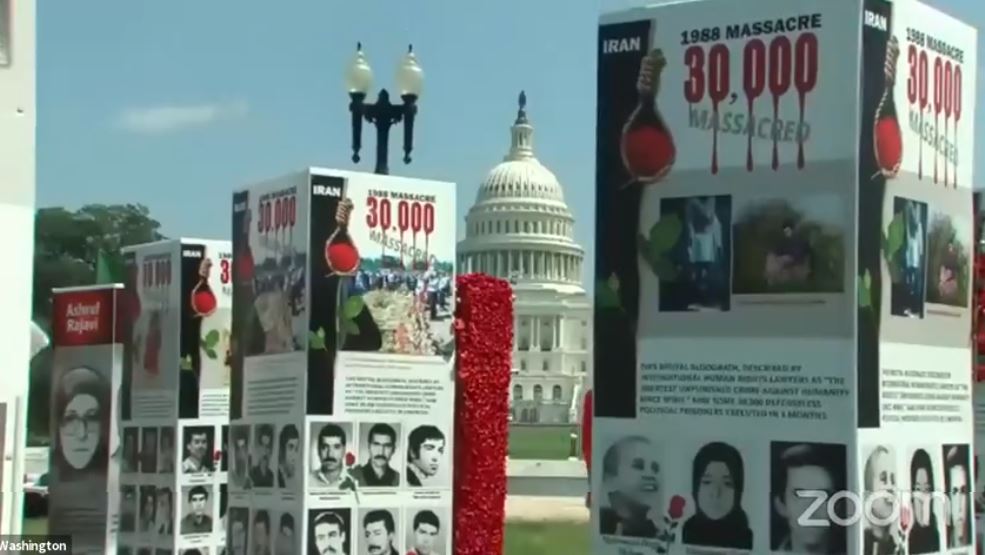 On Friday, September 4, the Organization of Iranian-American Communities (OIAC) presented a photographic exhibition in Washington, D.C. on the subject of the Iranian regime’s four decades of human rights abuses. The exhibit featured thousands of photographs and graphics and specifically focused on the 1988 Massacre of 30,000 MEK political prisoners, the 1,500 protesters killed by security forces during the November 2019 Uprisings, and the assassinations of The People’s Mojahedin Organization of Iran (PMOI / MEK Iran) members outside of Iran.

Speakers at the event included several current and former U.S. political figures, family members of the victims, and National Council of Resistance of Iran (NCRI)  President-elect Mrs. Maryam Rajavi. The speakers called for the regime to be held accountable for its crimes against humanity and specifically urged the international community to take immediate action to stop the execution of Iranian wrestling champion Navid Afkari, who was arrested during the 2018 Uprisings. 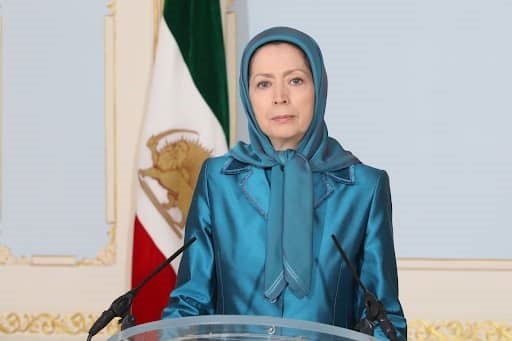 Mrs. Maryam Rajavi, the President-elect of the National Council of Resistance of Iran (NCRI) sent a video message to this event.

Highlights from the day’s speeches include:

“Holding this exhibition is particularly inspiring and effective on the 32nd anniversary of the massacre of 30,000 political prisoners in Iran in 1988. Nonetheless, it depicts only a small part of the crimes and terrorism committed by the ruling religious fascist regime.”

Holding this exhibition is particularly inspiring and effective on the 32nd anniversary of the #1988Massacre of 30,000 political prisoners in #Iran, one of the most horrific cases committed by the clerical regime on Khomeini’s fatwa.https://t.co/b6Zng3YbxI pic.twitter.com/pkCaSQ0ifa

“In the past 32 years, the Iranian Resistance has persistently called for the masterminds and perpetrators of this great crime against humanity to be held accountable. And now, more than three decades later, the blood of the victims of the 1988 massacre is roaring across Iran and inspiring young people.”

More than three decades later, the blood of the victims of the #1988Massacre is roaring across #Iran and inspiring young people. The PMOI martyrs who walked to the gallows by the thousands to uphold the cause of freedom, are today the topic of debate in Iranian society pic.twitter.com/p19479fWNt

“I have continually called on the international community to condemn the clerical regime and to take urgent action to stop the executions. I urge you to persistently follow up on this to prevent these inhuman verdicts from being carried out against Iran’s young generation.”

“Over the past 40 years, in addition to suppression, the mullahs have been targeting the PMOI/MEK and the Iranian Resistance every day with their slanders and lies in an extensive and expensive demonization campaign. The flip side of the demonization campaign is the mullahs’ unbridled terrorism, the sharp edge of which is directed against Iranian dissidents, specifically the PMOI/MEK and the Iranian Resistance.”

“The massacre of the political prisoners of Iran in 1988 was one of the worst crimes in the post-World War II era. The regime lied to the world. But the truth has come out. We know that the people who sent these political prisoners to their death are still in power today. We have the proof and we have those who are culpable.”

“We are here to make sure the prisoners are remembered. We cannot ignore 1988 anymore. This was one of the largest crimes against humanity. The United States and some of its allies don’t always agree on policies toward Iran. But they don’t disagree on Iran’s human rights violations. The people who sent these political prisoners to their deaths must be held to account. I call upon my government and other governments to act now. They must stop these extrajudicial killings. They have sentenced Iranian wrestler Navid Afkari to death and his brothers to decades in prison for standing in protests. These are brave people, ladies, and gentlemen. Let’s stand with them.”

.@OrgIAC event highlighting over 40 years of systemic violations of human rights in #Iran, particularly the #1988Massacre of 30,000 political prisoners, the Nov 2019 murdering of 1,500 protesters & the assassination of dozens of political dissidents abroadhttps://t.co/UasLlDElmJ

“What went on in 1988 must be remembered. What’s going on in Iran is still horrific. The actions of the government have been repression against people’s rights. It’s more important than ever to remember the victims of the 1988 massacre. We must have a free Iran.” 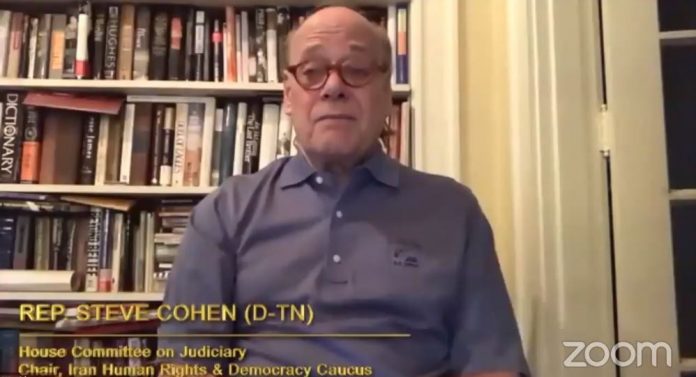 Rep. Steve Cohen (D-Tennessee) who said: “What went on in 1988 must be remembered.

“I join you to condemn the 1988 massacre. I join the thousands who raise their voices to call justice for the victims. We both have a history of disavowing the terrorism of the regime against the people of Iran. I will continue to support you.” 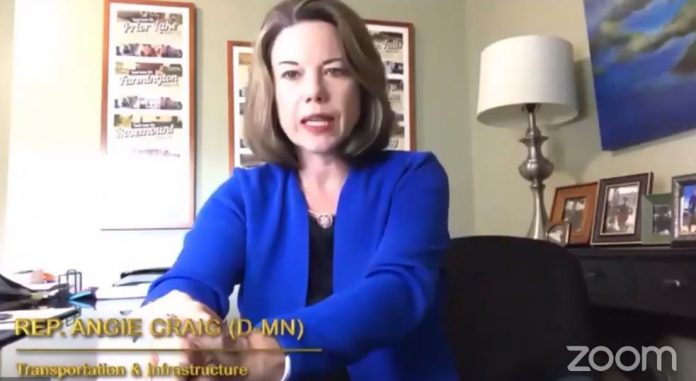 “My thoughts and prayers are with those who knew people or had relatives killed in the 1988 massacre. I am a co-sponsor of the House resolution that condemns the regime and calls for a non-nuclear Iran. I appreciate what you’re doing and stand with you to support your mission.” 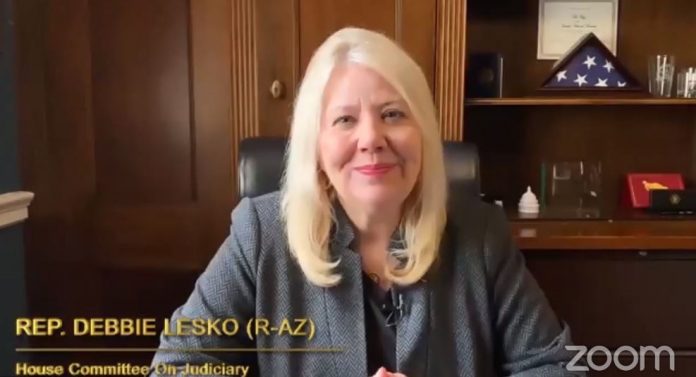 “The Iranian regime has continued its campaign of terror at home and abroad. They regularly target Iranians who call out their rights abuses. The Iranian regime is the biggest state-sponsor of terrorism. It spends $1 billion to fund proxies to spread terrorism. Last year they killed more than a thousand protesters who raised their voices. We stand with you.” 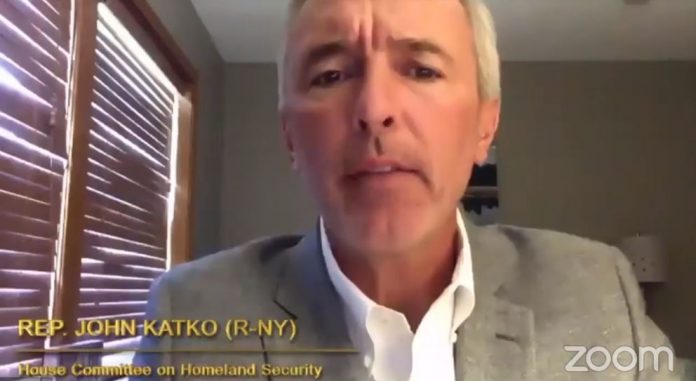 “Together, we need to support the ongoing fight for human rights in Iran and speak the truth of the past, including the mass executions of thousands of political prisoners in 1988. This slaughter was carried out under the order of Khomeini.” 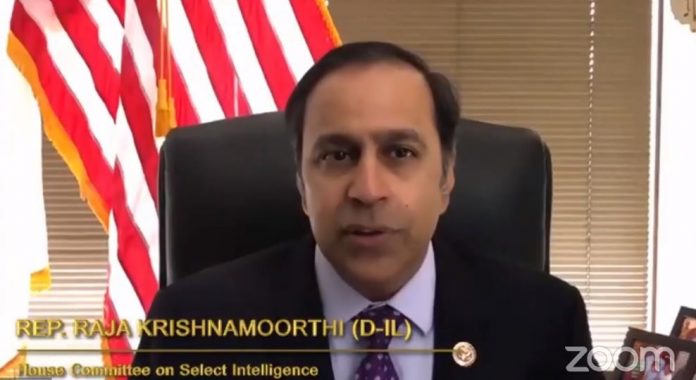 “It is important that we remember who we are dealing with, the mullahs in Iran, and we recognize that things really have not changed. The massacres have continued. We saw it last year in the uprisings, and all those young people killed in Iran’s streets.” 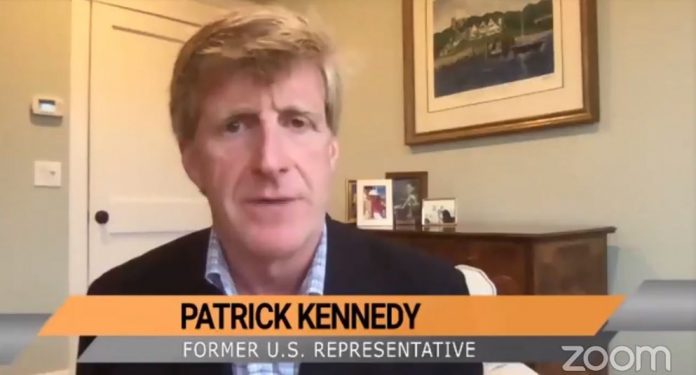 Patrick Kennedy, a former member of the U.S. House of Representatives

“The mullahs promised a revolution and instead delivered a dictatorship that has terrorized people. MEK members have been on the front lines. They have been the chief target of the Iranian regime. There is no question as to why the regime continues to target MEK members. They know the MEK is organized, that they stand for a platform, that Maryam Rajavi’s ten-point plan challenges who the mullahs are.”

“In 1988, 30,000 political prisoners were victims of summary executions by the regime of Iran. We must be that alarm clock for justice. We must be protectors of human dignity everywhere. We can’t be on the ground in Iran. But we can do what we can where we are. Our world depends on it. Those who were the victims of that gross injustice against humanity are witnesses of how we run the race in our time. Let’s continue to speak up and demand justice is done.”

“I knew Kazem Rajavi. He belongs in the human rights Hall of Fame. He was assassinated thirty years ago by Ayatollah Khamenei. He was the first representative of Revolutionary Iran in the U.N.. He resigned because of arbitrary arrests and execution in his country. He was very active in defending human rights in Iran. They killed him in his driveway in his home in Geneva. We had a memorial for Kazem at the U.N. headquarters in New York.”

Families of Victims of the Regime’s Human Rights Abuses

Sister of a 1988 massacre victim

“I am the sister of Hamid Sadeghpour, my brother. He was one of the smartest students in his high school. He was a supporter of the MEK. He was very active with the movement. In July 1981, he was arrested for supporting the MEK. He spent seven years in prison. After he endured seven years in prison and torture chambers, he was killed by the regime.” 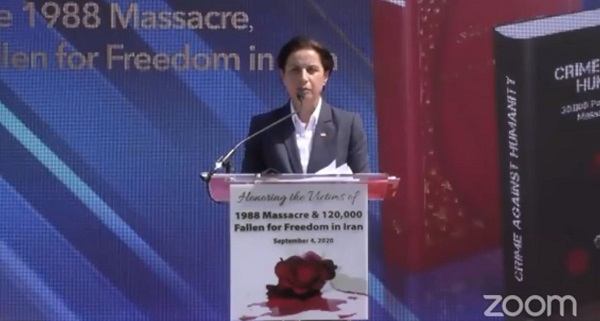 “I am the only survivor of four brothers. Three of my brothers have been executed by the regime. The regime must be held to account. My younger brother Behrooz was very gifted and talented. He was a supporter of the (PMOI / MEK Iran) when he was studying in college. In 1981, one day he left home and we never saw him again. We searched for him for 17 days. Finally, we found out about his fate in the newspaper Keyhan among the names of others executed. The news was a shock to our family. My father reached out to the inspector general’s office. The cleric told my father, ‘your son had a camera and was taking pictures of a MEK demonstration.’ These criminals are still in charge, the same people who killed my brother. They sentenced him to death without access to a lawyer. They tortured him for 17 days, killed him, and buried him in the Behesht-e Zahra Cemetery without telling my family.”