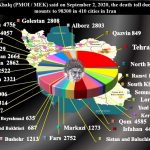 Written by Amineh Qaraee on September 3, 2020. Posted in NEWS 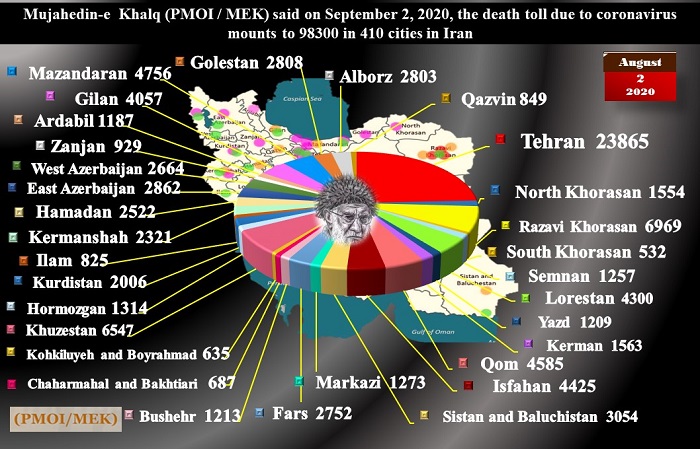 The Iranian regime held Muharram ceremonies and the annual mourning ceremonies for Prophet Muhammad’s grandson, Hossein ibn Ali, in various cities with basically no social distancing, mask-wearing, or other protections against the coronavirus.

More than 98,300 people have died of the novel #coronavirus in 410 cities checkered across all of Iran's 31 provinces, according the Iranian opposition PMOI/MEK.

The regime’s criminal actions here will result in a major rise in coronavirus cases over the next two weeks and deaths over the coming months; something that they were warned about by medical experts and staff who predicted hundreds of deaths.

The regime not only ignored the pleas not to hold these ceremonies, but they tried to increase crowds by offering free food, which is a major temptation to the 80% of Iranians below the poverty line before the pandemic and the subsequent economic collapse.

President Hassan Rouhani previously claimed, despite scientific evidence, that the ceremonies should be held with health guidelines in place and then thanked the clerics, Supreme Leader Ali Khamenei, who ordered that these gatherings be held at any cost. Notably, the mullahs did not attend public gatherings.

Of course, while the mullahs had it in their power to ban these gatherings and could have discouraged people from attending, but they didn’t and now they will blame the people for the increase in coronavirus cases that are certainly coming.

While, Tehran Covid-19 Task Force chief Alireza Zali said: “Due to the dense traveling in recent days in Tehran, we are forecasting a new Covid-19 peak prior to the coming of the fall season.”

The People’s Mojahedin Organization of Iran (#PMOI / #MEK Iran) announced this afternoon, September 2, 2020, that Coronavirus has taken the lives of more than 98,300 in 410 cities across #FreeIran2020 #Iran.https://t.co/CldMX3K2dQ

However, it is the mullahs who are making the terrible decision to reopen schools hold exams, and hold morning ceremonies during a pandemic, which tracks with Khamenei’s earlier aim to turn the coronavirus threat into an opportunity by increasing the regime’s power.

Mrs. Maryam Rajavi, the President of the National Council of Resistance of Iran (NCRI), earlier mentioned: “The unprecedented spike in Coronavirus across the country and the regrettable number of victims are entirely the results of criminal policies pursued by Khamenei and Rouhani. The current situation was both predictable and preventable.

The situation of #women political prisoners is catastrophic in #Iran under the misogynistic rule of the mullahs. They are deprived of the minimums of a decent life, hygiene and medical care during the pandemic.

The Iranian Resistance (PMOI / MEK Iran), and many domestic and foreign experts had warned about it repeatedly. This is a manifest case of crime against humanity. Overcoming Coronavirus, as is the case with overcoming poverty, high prices, and unemployment, as well as containing the destructive impact of flood and earthquake in contingent upon overthrowing the clerical regime and establishing people’s sovereignty, in which case all of our nation’s resources will be utilized for advancing and improving people’s lives.”