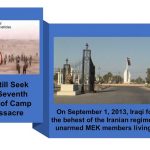 Written by Jennifer Jones-Kelley on August 31, 2020. Posted in NEWS 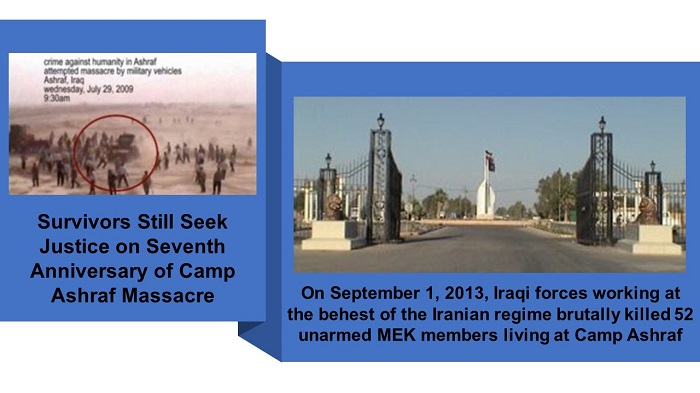 On September 1, 2013, Iraqi forces working at the behest of the Iranian regime brutally killed 52 unarmed MEK members living at Camp Ashraf. Seven more camp residents, six of whom were women, were kidnapped during the massacre and presumably extradited to Iran. The victims of the attack all had protected person status under the Geneva Convention. Tuesday marks the seventh anniversary of the Camp Ashraf Massacre.

Struan Stevenson, Coordinator of the Campaign for Iran Change (CIC), former Scottish Member of European Parliament, and President of the European Parliament’s Delegation for Relations with Iraq from 2009 to 2014, wrote a detailed account of the massacre in his book, “Self-Sacrifice: Life with the Iranian Mojahedin.”

Stevenson explained in his book that most of the residents of Camp Ashraf had been forcibly moved to Camp Liberty by 2013, but 101 (PMOI / MEK Iran) members stayed behind to catalog their belongings and ensure that they would be transported to Camp Liberty or sold for fair market price, under the terms of the deal negotiated with the Iraqi government through the United Nations. Lawyers who were employed to assist with the process were intimidated by the Iraqi government and fled. Iraqi Prime Minister al-Maliki then cut off supplies, food, water, and electricity to the camp in late August to try to force the last occupants to leave before their belongings could be properly accounted for.

Commemoration of April 8, 2011 Massacre in Camp Ashraf among #PMOI/#MEK members in Tirana pic.twitter.com/OJW6mNBkTB

According to Stevenson’s account: “Around midnight on Saturday 31 August 2013, several battalions of the Iraqi military and special SWAT forces, acting on orders directly from Prime Minister Nouri al-Maliki, stormed the camp under cover of darkness. The attack began at 6 AM on 1 September. Anti-tank rocket-propelled grenades and mortars were fired into the sleeping quarters of the refugee camp, and the fleeing residents were then machine-gunned. 52 deaths and dozens of severe injuries resulted. Many of the residents were handcuffed and then summarily executed by being shot in the back of the head. Nine seriously injured residents were carried to the camp clinic by their colleagues but were then executed by Iraqi military personnel on their hospital beds. Seven injured residents, six women, and one man were kidnapped.

“Their mission was clearly to take a few hostages and kill all of the rest. The 42 survivors were the ones who the killers could not find, which explains why General Jamil Shemeri, commander of Diyala police, who had personally taken part in this operation, hearing that there were some survivors, demanded to know how the hell they were still alive?”

The overwhelming majority of the residents’ belongings at Camp Ashraf were looted during the attack.

Stevenson lamented that the international community did not respond with urgency, due to the Syrian civil war. The massacre received very little media coverage because of the situation in Aleppo. He wrote that the mullahs planned the attack to coincide with the Syrian war because they knew that the Syrian conflict would distract the world from the atrocity committed against the MEK residents at Camp Ashraf.

Footage taken during the massacre made it hard to justify the lack of international outrage. “I watched horrifying films of the atrocity taken by some of the Ashrafis,” wrote Stevenson. “In one film, Iraqi soldiers can be seen shooting dead unarmed civilians and then, spotting the cameraman, running towards him firing their weapons. The soldiers can be seen bursting through a door where the cameraman had taken refuge and the final footage shows them raising their Kalashnikovs and firing a burst directly at the camera, which then tumbles to the ground. This brave Ashrafi died filming his own murderers.”

Stevenson wrote that the massacre could have been prevented if European and U.S. officials had taken heed of intelligence reports warning of such an attack. “This final massacre at Ashraf was as avoidable as it was predictable; myself and many members of parliament, congressmen, senators and leading judicial and military figures in Europe and America had warned for months that a massacre was imminent. In late August, intelligence reports from inside Iran made clear that the Mullahs saw the Syrian crisis and the West’s ineffectiveness as ideal cover for a brutal strike. Despite warnings to US Secretary of State John Kerry and others of the inevitability of an attack, no action was taken to protect the unarmed men and women in Ashraf, who subsequently forfeited their lives,” Stevenson wrote.

On September 2, 2013, György Busztin, the U.N. Secretary-General’s Deputy Special Representative for Iraq, visited the site of the massacre and prepared a report on his findings. The following day, UNAMI released a statement on the attack. It read: “Inside the camp, the delegation witnessed 52 bodies in a makeshift morgue. All the deceased appeared to have suffered gunshot wounds, the majority of them in the head and the upper body, and several with their hands tied. The delegation also saw several damaged buildings, including one burnt, and was shown quantities of explosives.”

On September 19, 2013, then-European Union Foreign Policy Chief Baroness Catherine Ashton confirmed that the hostages who were abducted during the massacre were being held in an Iraqi detention center and faced extradition to Iran. This violated the non-refoulment principle. Amnesty International issued an Urgent Action on November 19 pleading for their release, writing, “The seven Iranian exiles abducted on 1 September are now known to be held by the Iraqi security forces at an unofficial detention facility in central Baghdad. They are at risk of torture and other ill-treatment and could be forcibly returned to Iran.”

For starters, on 1/12/16, the IRGC Navy seized two U.S. Navy boats and held the U.S. sailors for 15 hours, in contravention of their rights under the Geneva Convention. More:
Iranian Regime Malign Activities During Negotiations With Iran and During JCPOAhttps://t.co/JwqGWXQUES

To date, no one has been held accountable for the Camp Ashraf Massacre. The MEK and Iranian Resistance have called repeatedly for the United Nations to launch an independent investigation into the attack and to bring the perpetrators to justice, but those calls have gone unanswered. Last year, the U.S. Department of State released a statement declaring that the Iranian regime proxies were responsible for the Camp Ashraf Massacre and used that as partial justification for its reinstatement of nuclear sanctions. This gesture was welcomed by the Iranian Resistance but did not do enough to punish the perpetrators of this crime against humanity.