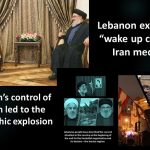 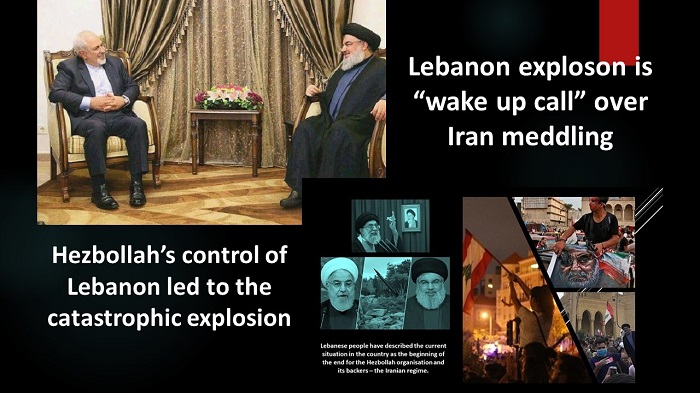 MEK Iran: The terrorist Hezbollah, and their masters in Iran, should be a “wake-up call on Hezbollah’s death grip on Lebanon”.

A leading European politician has said that the recent explosion in Beirut, Lebanon, and the people’s righteous protests against the puppet government, the terrorist Hezbollah, and their masters in Iran, should be a “wake-up call on Hezbollah’s death grip on Lebanon”.

Struan Stevenson, the Coordinator of the Campaign for Iran Change, explained that for 30 years, Lebanon has been under the control of terrorist group Hezbollah, which is backed by the Iranian regime.

#Iran: The protests in Iraq, Syria and Lebanon are in line with the #Iranian people’s uprising. The elimination of Qassem Soleimani, as the regime’s irreplaceable terror mastermind, was a major blow to the regime’s so-called strategic depth. https://t.co/QpMeCKXrQY

He listed these as Hezbollah’s crimes:

Stevenson, a former member of the European Parliament, said: “Despite repeated warnings of the dangers involved in storing such huge quantities of the highly volatile chemical, a combination of negligence, gross incompetence and endemic corruption that characterizes Hezbollah’s control of Lebanon led to the catastrophic explosion.”

Read my take in @UPI on the #BeirutExplosion
For at least three decades, Lebanon has been under the vice-like grip of #Hezbollah, an Iranian-backed Shi'ia terrorist organization.#Iran #BeirutBlast #Lebanon #Lebanonexplosion https://t.co/gLgGD9lfhI

He advised that Hezbollah had held up decisions about what was to be done with the ammonium nitrate, which meant that there was enough at the port to cause such a deadly explosion.

Stevenson lamented that even the resignation of the government, after the uprising of the Lebanese people, will not be enough to get Hezbollah out of Lebanon and that this will additionally prevent the people from getting international aid because Hezbollah, which has control of the parliament, is under sanctions for terrorism.

He said: “Meanwhile, a large number of Iranian cargo planes have been seen flying into Beirut Airport since the blast, although there is growing speculation that this giant 747s may not have been delivering emergency food and medical supplies as claimed by Tehran. The mullahs are always very quick to propagandize any relief operations and usually have teams of photographers and TV cameras on hand to witness the event.

Lebanon protests are a major blow to Iranian regime Over the years, #Iran has spent huge sums of money funding the Hezbollah. The current protests in the country are a huge blow to the #Iranian regime #MEK #FreeIran2020https://t.co/nWS2BSNF1u via @stopfundamentalism pic.twitter.com/Xr1yDX0CFD

This time, the fleet of cargo planes arrived and departed virtually unannounced, leading to suspicions that the mullahs were cynically using the aftermath of the blast as cover for trafficking large quantities of weapons and men to Damascus. Indeed, some of the planes had previously been seen in Damascus delivering illicit munitions and their parent companies had been sanctioned by the Americans for being part of the Islamic Revolutionary Guards Corps, the regime’s terrorist-listed Gestapo.”

Stevenson cited that Hezbollah Secretary-General Hassan Nasrallah pledged his allegiance to Iran’s supreme leader Ali Khamenei and that this has turned Lebanon into an Iranian province. Seeing how the mullahs treat their own country, this cannot be good news.