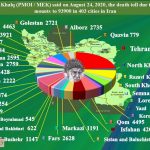 Written by Jennifer Jones-Kelley on August 25, 2020. Posted in NEWS 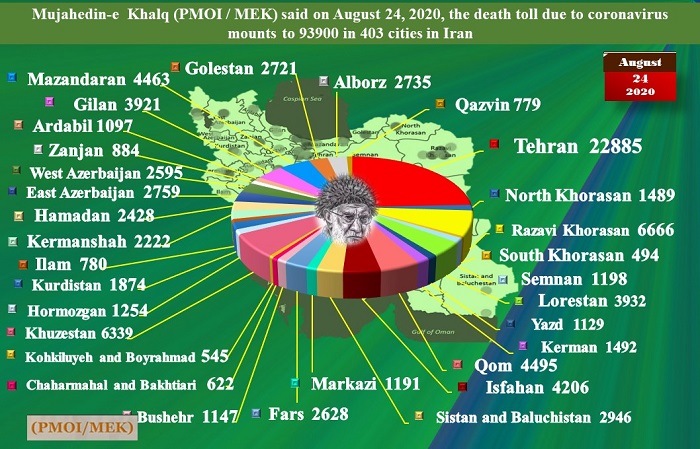 More than 93,900 people in 403 cities in all 31 provinces in Iran have died from Covid-19, according to an August 24 announcement from the MEK. The regime has confirmed 20,776 Covid-19 deaths or approximately one-fifth of the actual total.

On Saturday, August 22, Tehran City Council member Mohammad Javad Haghshenas called attention to this disparity in reporting in comments that were quoted on the state-run Etemad Online website. “We would see that, for example, in the Beheshte Zahra Cemetery they were burying 120 to 130 people [each day], and then the Health Ministry would announce numbers from the entire country equalling that of Beheshte Zahra,” he said.

Haghshenas said the Islamic Revolutionary Guards Corps (IRGC) Intelligence Organization filed a complaint against him after he revealed the correct Covid-19 death statistics and threatened his source. “I realized that [the IRGC] had told the [source] to not provide the true coronavirus death toll to anyone. The individual was threatened… he finally agreed to SMS the numbers to Tehran’s mayor and for him to share it with the Council group and to describe it as ‘classified…’ The letter came from the minister indicating this criterion should not be released or discussed publicly. Follow up on this subject only in a private session,” Haghshenas said.

A number of regime officials have expressed concern that conditions will worsen in the fall. On Monday, Minoo Mohraz was quoted by the official IRNA as saying,  “This fall, we will witness a blend of coronavirus and flu. In the current situation, we don’t know what will happen to a society in fall and winter. We must prepare ourselves for greater problems. Many of the mourning ceremonies are not compliant with the instructions of the health ministry.

The health ministry banned refreshment stations for mourners and tekyeh (congregation locations for mourners). This is while many stations have been installed across the city… Many of the mourning ceremonies are held with large crowds. In closed-door locations, if air conditioners are on, they will increase humidity, and humidity will amplify the spread of the virus. In such circumstances, even if people wear masks, they still risk contracting the virus. More importantly, tears carry the virus. People who cry during the ceremonies and touch every location threaten to infect others with the virus.”

The People’s Mojahedin Organization of Iran (PMOI /#MEK), announced this afternoon, Monday, August 24, 2020, that the #Coronavirus fatalities in 403 cities across #Iran had reached 93,900. #COVID19 https://t.co/feDOqAGQJb pic.twitter.com/Qtc4jVXTuN

The IRGC-affiliated Javan Daily quoted Deputy Health Minister Iraj Harirchi, who shared concerns about the confluence of Covid-19 and influenza this fall. “In the past six months, 14 percent of the people who contracted coronavirus got the disease again. The average number of hospitalized coronavirus cases and deaths has increased in comparison to March, the peak of the coronavirus outbreak. As the weather gets cold, the possibility of contracting coronavirus and flu will increase,” he said.

More than 93,900 people have died of the novel #coronavirus in 403 cities checkered across all of Iran's 31 provinces, according to the Iranian opposition PMOI/MEK.

The Dean of Jiroft Medical Sciences University in Kerman Province warned of an impending third wave of coronavirus infections in comments carried by the semi-official ISNA. “In the second wave, our [official] casualties reached eight daily deaths. If the health protocols are not observed in Muharram, we’ll be dealing with the third wave of Covid-19 before fall,” he said.

On Sunday, August 23, regime President Hassan Rouhani boasted that the country’s economy had “only” shrunk by three percent since the coronavirus pandemic reached Iran this year. The state-run Ebtekar Daily disputed Rouhani’s reasoning in an article on Monday. “Many analysts and experts believe that three percent is a small number. If we break down Covid-19’s effect on all businesses, we’ll see that most businesses across the country, especially small businesses, have been shut down or only half-open. Many people have dealt with staff adjustment. Purchase power has decreased. The recession has expanded. Given all these issues, if we examine damages to each sector of the economy separately, Covid-19’s effect on Iran’s economy will be a much higher number.”

Mrs. Maryam Rajavi is the President-elect of the National Council of Resistance of Iran’s (NCRI): The abnormal surging trend of the number of coronavirus victims in Iran is a product of the criminal policies of Khamenei and Rouhani.