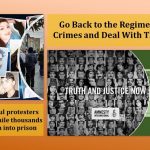 MEK Iran: Go Back to the Regime’s Worst Crimes and Deal With Them First 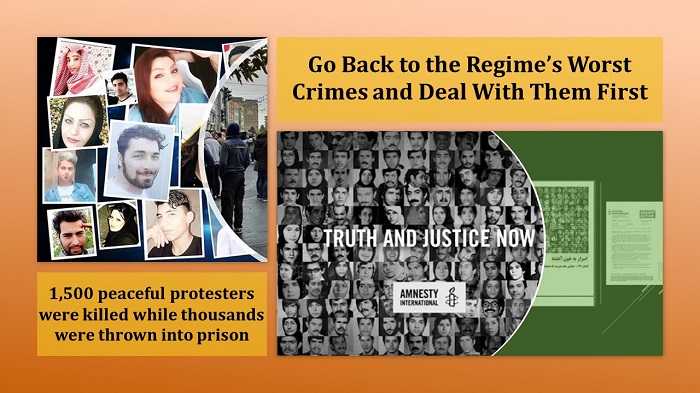 (PMOI / MEK Iran) had presented numerous testimonies from massacre survivors over the years.

The Iranian theocratic regime has become well known as the world leader in terrorism but because much of their activity is concealed both at home and abroad it is difficult to pinpoint exactly what their crimes are. So far there has not been much focus on the terrorist activities of the regime by western countries like the U.S. because of the appeasement policy towards the country that has persisted over the last few decades. Even the horrendous crimes against ordinary Iranians in their own country have received little attention from the outside.

Democratic countries have the responsibility to demand accountability from the Iranian regime for their extended history of human rights abuses, which in total work out to be the worst crimes against humanity since World War 2 came to an end.

The crimes against humanity have been so bad that even Khomeini’s heir, Hossein Ali Montazeri, referred to the 1988 mass executions as “the worst crimes of the Islamic Republic.” These words were not released to the public until 2016. But the People’s Mojahedin Organization of Iran (PMOI / MEK Iran) had presented numerous testimonies from massacre survivors over the years and had calculated that 30,000 people from the opposition movement, which included the MEK, had been executed.

Reporting by PMOI/MEKIran, August 22, 2020—The United Nations should launch a process to hold accountable all Iranian…

No serious crimes have proven before executions

Many witnesses of these crimes against humanity had said that the “death commissions” which took place in Iranian prisons were not provided with sufficient evidence but all they were told to do was ask the inmates to declare as to how they viewed the theocratic regime and if they supported the (PMOI / MEK Iran). Time and time again the trials lasted just a few short minutes and the prisoners were then hanged.

What happened in 1988 was the start of a long period where the opposition movement started to gather more support while the regime consistently cracks down on any dissent. Even in November 2019, 1,500 peaceful protesters were killed while thousands were thrown into prison.

Over these last long years, the international community has failed to give the massacre the publicity it deserved. So, this attitude has meant that no one in the regime has ever been held accountable for these murderous, atrocious acts. Despite the fact, the present head of the judiciary and the current Minister of Justice both served on these 1988 death commissions in 1988 they have never been punished by either the Iranian legal system or the international community for their indiscriminate crimes against humanity where no suitable trials were held for the defendants.

By: @STRUANSTEVENSON
It is the duty of the UN to examine this case and bring its masterminds and perpetrators to justice…The mullahs must be held to account in the international criminal courts. #Iran #HumanRights #1988Massacre https://t.co/zG1QJGiq70

Now the time has come for the international community to look into these 1988 events and take those responsible to court.