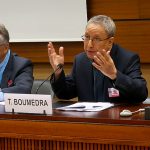 MEK Iran- Tahar Boumedra: UN Security Council should refer the 1988 massacre to the ICC to investigate and prosecute the perpetrators 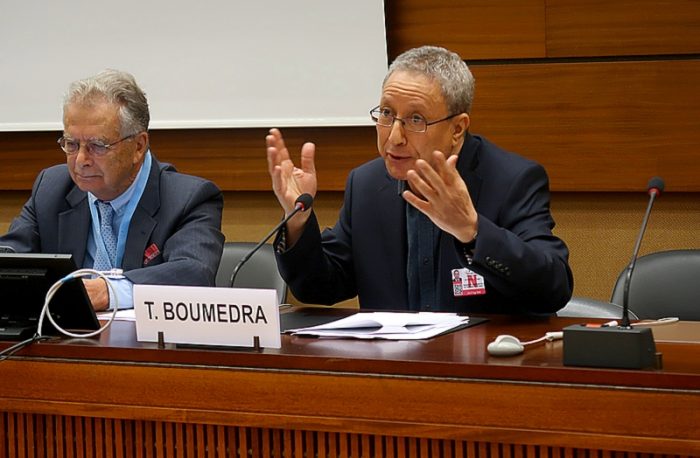 Tahar Boumedra, speaking at a conference on the 25th of September, 2018 during the 39th Regular Session of the UN Human Rights Council at the Palais des Nations, in Geneva, Switzerland.

During a conference on the 1988 massacre of 30,000 political prisoners in Iran, mainly members and supporters of Mujahedin-e Khalq (MEK), Dr. Tahar Boumedra former chief of UNAMI and the Secretary-General’s special representative in MEK’s camp, Ashraf in Iraq, called for the referral of the case by the UN Security Council to the International Criminal Court(ICC) to investigate and prosecute the perpetrators of the 1988 massacre.

During the 1988 massacre, at least 30,000 political prisoners, who were mostly MEK members and supporters were executed in a short period of time for refusing to denounce MEK.

Complaining about the International human rights organizations in taking action to hold those responsible for the crime accountable, Dr. Boumedra said, “In the absence of any official independent inquiry into the mass extralegal killing and inhuman or degrading treatment or punishment of prisoners, and given that the Iranian government had proved to be unwilling to cooperate with the UN Special Procedures on this matter, the London-based association of “Justice for the 1988 Massacre of the Political Prisoners in Iran (JVMI)” probed into a large amount of data emanating from various sources, including statements of officials in the Iranian government. JVMI published two reports on the 1988 massacre shedding light on what happened and identifying the suspect perpetrators.”

“The two JVMI reports of 2016 and 2017 were published and submitted to the relevant United Nations organizations calling for the establishment of a UN commission of inquiry to investigate the alleged massacre.” Dr. Boumedra added.

Former UNAMI’s human rights chief reiterated, “It should be underlined that the persecution of political prisoners in Iran on the ground of their political, religious and/or ethnic belongings is an ongoing crime that must stop and the perpetrators must be brought to justice. Today, in the absence of accountability, the Iranian regime is getting emboldened in persecuting peaceful demonstrators who request that the public funds be spent on the well-being of the people of Iran rather than on exporting the Islamic revolution.”

MEK: justice for the massacre’s victims and the hopes the U.N. General Assembly will also bring up the matter. Anybody…

Dr. Boumedra who is also a human rights lawyer and an expert in the field, suggested, “After 32 years since the 1988 massacre of political prisoners, it is clear that Iranian officials are unwilling to act on the calls of the UN to investigate and reveal the truth. It is also clear that UN human rights agencies are unable or unwilling to set up an independent commission of inquiry without the consent of Iranian authorities.

So, in such circumstances, what are the other avenues left to the victims’ families? I suggest three possible avenues:

1- Universal jurisdiction: As most Iranian suspects in the commission of crimes against humanity are already listed for terrorism offences and other crimes under international law by EU Member States, USA, Canada and others, it is possible for a national court of these states to accept jurisdiction over an act categorized as a crime against humanity.

2- Facilitating the conditions for the ICC Chief Prosecutor to initiate on her/his own initiative after seeking the permission of the concerned ICC chamber to undertake a preliminary investigation of the most serious crimes.

3- The referral of the case by the UN Security Council to the ICC to investigate and prosecute.”