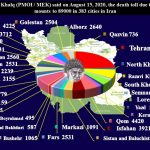 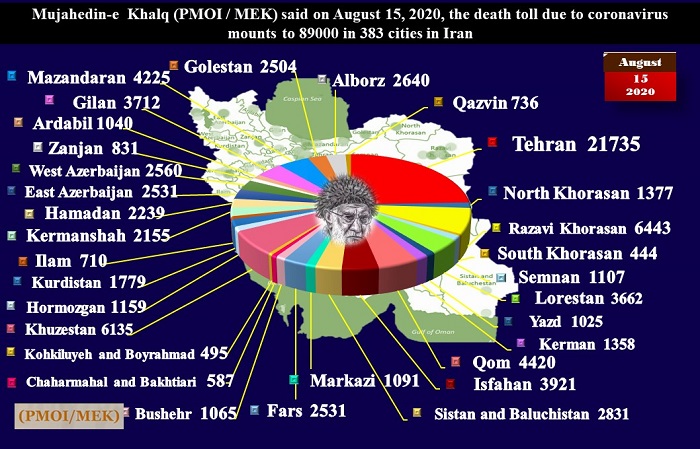 MEK Iran: Covid-19 has now reached the 89,000 marks with no sign of any easing in numbers.

The death toll in Iran from Covid-19 has now reached the 89,000 marks with no sign of any easing in numbers. The regime’s figures, by contrast, show only 19,331have died from the disease. The higher figure has been recorded by the Iranian opposition organization, the People’s Mojahedin of Iran (PMOI / MEK Iran).

The following list shows the number of fatalities in some of Iran’s provinces:

The People’s Mojahedin Organization of Iran (PMOI/#MEK) announced on Saturday, August 15, 2020, that the #Coronavirus death toll in 383 cities across #Iran had exceeded 89,000. #COVID19 https://t.co/oWaLp8tvgy

Some of the decisions made by the regime have provoked controversy and fierce debate in the country’s Majlis (parliament). One Majlis member wondered out loud why Hassan Rouhani, the regime president, is keeping away from the Majlis when the regime thinks it is fine for students to sit in crowded conditions doing their college entrance exams. “The president’s office must answer to these questions and why do they play with the thoughts and minds of the people’s loved ones,” he said.

Rouhani has been excused from attending the Majlis on the recommendation of the National Covid-19 Task Force in case he becomes infected with the virus.

Tehran’s Covid-19 Task Force chief, Alireza Zali, thought it was a “strategic mistake” to open up the economy so quickly as it allowed people to become complacent. “The problems and damage caused by Covid-19 have been far worse than the first days of this illness. Coronavirus will continue and if we do not have a realistic viewpoint we will lose the public’s trust,” he said in a report by the Mehr News Agency.

More than 89,000 people have died of the novel #coronavirus in 383 cities checkered across all of Iran's 31 provinces, according to the Iranian opposition PMOI/MEK.

A member of Tehran’s Coronavirus Task Force, Reza Jalili Khosnood, said that Tehran hospitals are full of Covid-19 patients, according to the Shafaqna website on August 14th.

The hygiene deputy of Shiraz Medical Sciences University said that 956 COVID patients had been hospitalized.

“Currently seven counties of Arak, Khomein, Khandab, Delijan, Saveh, Farahan, and Kamijan are in code-red conditions and the county of Shazand and Mahalat are in alarming conditions,” according to a spokesperson for the health ministry in Markazi province (IRNA news agency).

The head of the Shahreza health center in Isfahan said that medical staff was in short supply because so many had contracted the disease, according to the Javan Daily on 13th August.

An official at the Hormozgan Medical Sciences University said that there had been 624 deaths in the province of which 296 had been hospitalized.

Over 89,000 people have died of the novel #coronavirus in 383 cities checkered across all of #Iran’s 31 provinces, according to reports tallied by the Iranian opposition PMOI/MEK as of Saturday afternoon local time, August 15.https://t.co/6NT757b5yG