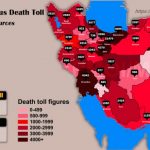 Written by Esmail Mohades on August 13, 2020. Posted in NEWS 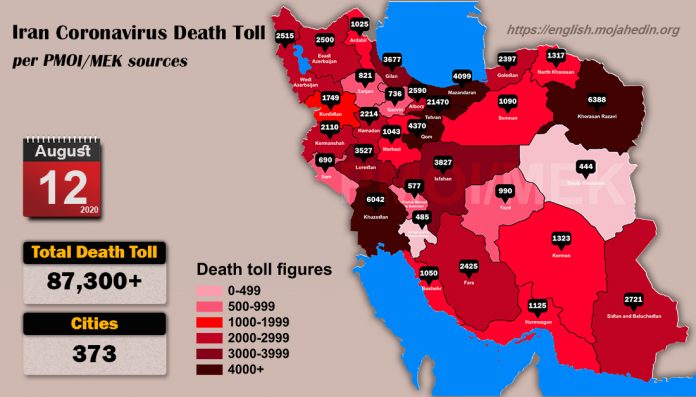 More than 87,300 Iranians have now died from Covid-19 across 373 cities. This number has been confirmed by the Iranian opposition organization, the People’s Mojahedin Organization of Iran (PMOI / MEK Iran). As has been usual ever since the epidemic spread in Iran, the government’s own concocted figures show only 18,988 deaths.

Provincial fatality figures for a selection of provinces are indicated below:

Over 87,200 people have died of the novel #coronavirus in 373 cities checkered across all of #Iran’s 31 provinces, according to reports tallied by the Iranian opposition PMOI/MEK as of Wednesday afternoon local time, August 12.https://t.co/7LDjWX1IKd

The Health Minister, Saied Namaki, says that only a third of the one billion euros promised from the treasury has actually reached the ministry. “Health is the country’s main pillar… However, some people think other issues are of more priority. Everyone has done their best to unify the efforts and voices into containing coronavirus as soon as possible,” he said, in an indication that internal disputes and corruption are having a significant negative effect on the regime’s ability to counter the virus.

Mostafa Moien, the head of the Supreme Medical Council also complained bitterly about the regime’s attitude towards public health and the response to the disease in particular. “Thirty to forty percent of the country’s capacity has been used to manage the novel coronavirus crisis. Of course, in the frontlines, more than 100 percent of the medical staff and nurses have been used. However, all the country’s resources for this management and the necessary resources to protect the people’s wealth have not been used,” he said.

In an interview with the regime’s own, official news agency, IRNA, Moien said “There are many threats, such as behind-the-curtain measures, and hiding the truth due to political, economic and ideological reservations. We must not keep a lid on the date when Covid-19 entered the country. We must follow science and not make decisions against science when it comes to college entrance exams, religious ceremonies, and other matters…” He went on to decry the regime’s decision to allow students to sit their university entrance exams and important religious ceremonies later this month despite evidence from medical experts and scientists that this could be counterproductive at best and calamitous at worst.

More than 87,200 people have died of the novel #coronavirus in 373 cities checkered across all of Iran's 31 provinces, according to the Iranian opposition PMOI/MEK.

“If we wait to head towards herd immunity measures and witness 70 percent of the society be contaminated with the virus, it will be a grave mistake because for one thing all the hospitals will be full and on the other hand, the number of casualties will be catastrophic,” said Moien.

Comments and reports from medical authorities include the following.

The deputy health minister, Iraj Harirchi, reported to the Shabakeyeh Khabar news network that four senior-level doctors and a nurse had died from Covid-19.

A 25 percent increase in infections and hospitalizations has been reported by a spokesperson from Isfahan’s health ministry. “Currently, 11 counties in this province are in code-red conditions and five counties are in alarming conditions. In densely populated and commuted counties such as Isfahan, Khomeini Shahr, Najaf Abad, Sahreza, Lenjan, Falaverjan, Mobarakeh, and Shahin Shahr, the situation of the disease is more fragile and sensitive.”

According to the dean of Ilam Medical Sciences University, the situation in Ilam has gone from “alarming” to code red. Infection rates and death rates from Covid-19 continue to be unpredictable, according to the same dean, in a report to the Fars News Agency, linked to the IRGC.

11 more Covid-19 deaths were reported by the Shiraz medical Sciences University on Tuesday. According to the treatment deputy at the University, “there are currently 936 hospitalized patients in the province who are suspicious of having coronavirus or have coronavirus symptoms, and 106 of them are in critical conditions.” (Report from the Mehr News Agency)

According to the Fars news agency, the disease has spread quickly through Semnan province. The governor of the province was reported saying that “we need special measures to prevent the spread from becoming worse during the months of Muharram and Safar. If we don’t take the spread of the coronavirus seriously, we will have to face more casualties and cases in the near future.”