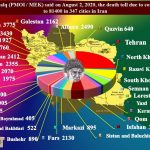 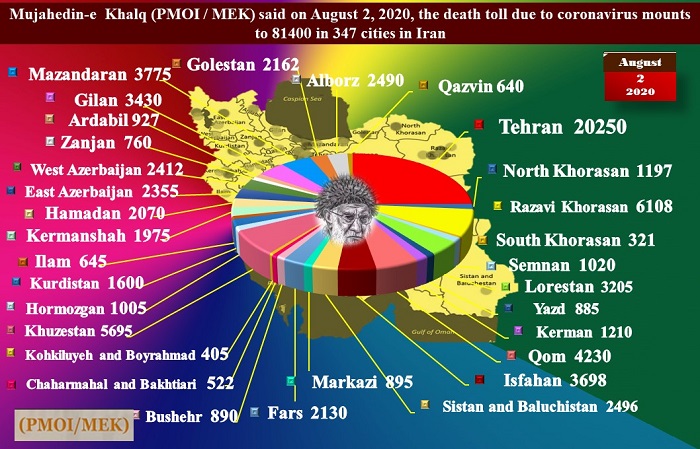 According to the People’s Mojahedin Organization of Iran (PMOI / MEK Iran), the death toll in Iran from the Covid-19 outbreak has passed 81,400, with 20,000 having already died in Tehran.

MEK figures that have been obtained from inside sources contrast strongly with the far lower figure released by the Iranian regime who claim that there have been only 17,190 dead as of August 2nd.

Over 81,400 people have died of the novel #coronavirus in 347 cities checkered across all of #Iran’s 31 provinces, according to reports tallied by the Iranian opposition PMOI/MEK as of Sunday afternoon local time, August 2.https://t.co/DB7eiZ063C

According to MEK sources, the regional death toll includes:

Over 4,000 people are in various ICU units across Iran, a higher figure than has been so far recorded. A Health Ministry spokesperson said last Sunday that “twenty cities in Mazandaran province are in code red and two are in alarming conditions.

The number of Covid-19 cases hospitalized has doubled in the past six weeks and the increase in the number of coronavirus cases in Mazandaran is truly concerning. Seven cities and towns in Lorestan province are in code red while three are in alarming conditions.

The number of Covid-19 cases hospitalized in the cities of Khorramabad, Aligudarz, Selseleh, and Dolfan is experiencing a faster pace. In Qom province from early to mid-July, we have once again witnessed a rising number of cases.”

The Deputy Health Minister, Iraj Harirchi, complained about state TV that the ministry had only received a third of what it had been promised. “Since we are now saying the final-year exams must be held, those who live abroad, those who are… against the Islamic republic say these exams should not be taken. If we come and say the final-year exams are canceled, those same individuals whose accounts can be subject to action will say that we have said all along that we are against education and learning, and are nothing but dark reactionaries,” he said.

An Isfahan Medical Sciences University spokesperson said that ICU patients have been increasing in number critically recently. He said that many cities and regions in Isfahan are now at Code Red status.

The official IRNA news agency reported that the number of patients in ICU in Eastern Azerbaijan had increased so much that the percentage occupancy was now 80% in ICU up from 20%. The dean of Tabriz Medical Sciences University said that all areas were now in code red status. “About a quarter of coronavirus patients in Eastern Azerbaijan are hospitalized in the ICU section. Until yesterday, about 850 coronavirus patients were hospitalized in the province’s hospitals. Of this number, about 200 are in the ICU section. If the situation persists, the medical staff will be worn out and exhausted and the capacity of the hospitals will be filled,” he said.

Mashhad Medical Council’s head reported the loss of 13 medical staff to Covid-19 in Razavi Khorasan.  The official said that “presently, about 80 percent of the province’s medical staff are actively engaged in the coronavirus response… One of the problems of the medical staff is procuring protective gear. Medical centers and clinics are still faced with a shortage of medical gear. Centers that are facing problems in procuring their needed material are forced to purchase them at several times the price in the free market.”

The Markazi province’s provincial governor said that in contradiction to what the health ministry had been saying the situation was getting worse, not better, with banks, government premises, and fuel pods suffering from high infection rates.