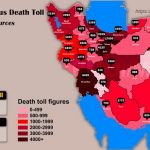 Written by Mohsen Aboutalebi on July 19, 2020. Posted in NEWS 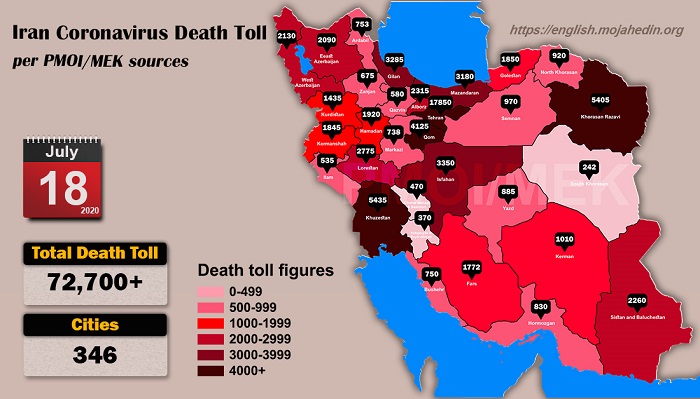 As the President-elect of the National Council of Resistance of Iran (NCRI), Mrs. Maryam Rajavi, said at its annual Free Iran Summit on 17th July, “more than any other time, this carnage uncovered the ghastly reality of how the mullahs have destroyed the country’s healthcare, nutrition, and social welfare foundations, leaving our people vulnerable to the virus more than any other country in the world.”

The effects of the Covid-19 outbreak in Iran are indeed bleak and far worse than the Iranian regime is prepared to admit. Over 72,000 Iranians have now died, according to figures obtained by the People’s Mojahedin Organization of Iran (PMOI / MEK Iran). The regime’s official figures given to the World Health Organization (WHO) only show 13,000 deaths, a serious under-reporting. Even the regime has had to admit that the death toll has just broken its own official records and has had to reinstate local lockdowns.

The dire situation and the fact that the Iranian regime is attempting to cover up its mismanagement of the epidemic were highlighted at the Summit on 17th July.

This year’s Free Iran Summit was an online affair in accordance with health protocols worldwide. In fact, the sophisticated internet hook up using Zoom actually connected more people than the usual in-person event that has been arranged previously. Ordinary citizens beamed in from their homes and offices and the Iranian diaspora all over the world attended virtually from wherever they have settled, all intent on hearing how the hated mullahs’ regime will finally end. It was a striking coincidence that the swollen attendance at the virtual summit came about because of the Covid-19 pandemic.

Many attendees who took part in prepared speeches at the summit mentioned the Covid-19 death toll in Iran and the regime’s mismanagement of it.

Robert Joseph, a former US Undersecretary of State for Arms Control and International Policy said “the mullahs know the people will never forgive them for the role they’ve played in the tragic deaths of the coronavirus pandemic.”

The mismanaged health strategy in Iran has played no small part in the regime’s own increased vulnerability to unrest and uprisings. Even its own think tank and regime officials have warned that the cover-up of the effects of the pandemic is only likely to lead to further destabilization. However, the conclusion is not that the regime should change its ways and become more honest and upfront about the situation, but instead step up repression by the IRGC in order to stamp out signs of unrest wherever they arise.

Mrs. Maryam Rajavi explained at the summit why there was this seeming contradiction: “if they continue to pursue their current path and course of action, namely… belligerence, missile launches, terrorism, intimidation, and contraction, they will inevitably crash headfirst. On the other hand, retracing their steps and changing behavior will undermine their very rule. This is why the regime is trying to consolidate power in the most brutal agents of the supreme leader.”

New York’s former mayor, now Donald Trump’s colorful attorney, Rudy Giuliani, said “the economy in Iran is collapsing.” He went on to reiterate that “it’s a tragedy. Even when Iran was getting a flow of money, people in Iran were starving. With coronavirus, the level of hunger and poverty in Iran is heartbreaking.” Mr. Giuliani said that the Iranian regime was more interested in spending money on terrorists outside of its borders rather than on its own people’s health and welfare.

Mr. Giuliani explained that the rapid spread of Covid-19 across Iran and the huge death toll was a direct result of the de-facto theft of public funds by the regime and its obsession with funding terrorist groups in other parts of the Middle East and Europe.

Mrs. Rajavi added that “more than any other time, this carnage uncovered the ghastly reality of how the mullahs have destroyed the country’s healthcare, nutrition, and social welfare foundations, leaving our people vulnerable to the virus more than any other country in the world.”

America’s first Homeland Security Secretary, Tom Ridge, clarified what many speakers were saying when he said “Covid-19 could not deter the world from gathering for the cause of freedom in Iran,” he said. “If a global pandemic is ill-equipped to silence us or keep us from gathering to support freedom, then the mullahs can’t possibly do it. They tried again and again, and they’ve failed. Over decades and decades, they’ve imprisoned and tortured thousands and thousands of your fellow citizens to silence the call for freedom, for regime change, and they’ve failed.”