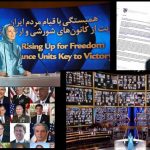 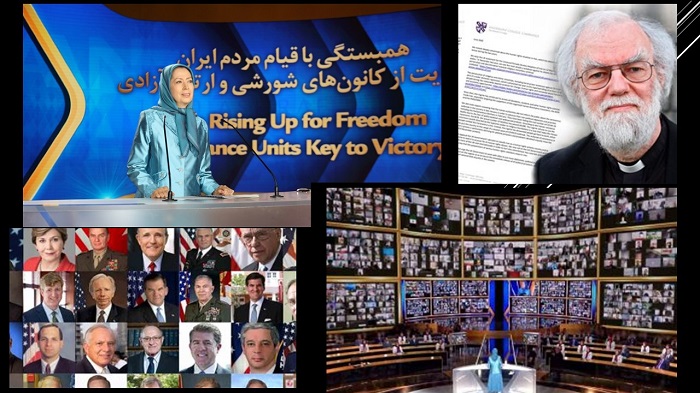 The National Council of Resistance of Iran (NCRI) held its annual “Free Iran” summit in support of the Iranian people’s uprising to overthrow the corrupt and criminal regime.  Almost 1,000 prominent figures, politicians, and parliamentarians covering 5 continents took part in the virtual rally through Zoom in solidarity and support of the Iranian people’s quest for freedom.

The gathering was broadcast live on 7 different platforms in English, Arabic, and Persian.

Speakers at the grand gathering included:

The ruling theocracy is close to being overthrown, and the people and the Iranian Resistance are committed to building a democratic and free Iran. We do not seek power at any cost; we seek freedom and justice and a democratic, secular, and non-nuclear republic

“Your support is invaluable for the cause to overthrow the religious fascism ruling Iran. This conference will voice its support for Resistance Units and Mrs. Maryam Rajavi.’’

“This conference shows how unity can bring change to Iran.’’

“This regime created militias based on sectarian affiliations, killing hundreds of thousands of Yemenis. The Iranian people deserve a democratic government that respects their rights and their neighbors. Mrs. Rajavi, you are our inspiration and the inspiration of all human rights activists.”

“We stand with you. But this regime, we can’t deal with them.”

“Let’s fight for the Iranian youth who are in the streets of Iran and the prisons. We can and must change Iran together.”

“This conference is a demonstration of the strength of the Iranian Resistance. We all believe in the possibility of having a free Iran.’’

Zinat Mirhashemi—NCRI Member, editor of the Nabard-e-Khalq publication of the People’s Fedaian Organization of Iran

“The flag of overthrowing the regime that was raised by NCRI is today in the hands of thousands of men and women across Iran.”

“This regime is dealing with drugs, laundering money, assassinating. We wait to witness the fall of this regime. I wish the opposition all the success.”

“That is the driving force behind this unprecedented event. Justice, freedom, democracy, is what we demand here today.”

“It is really important for the universal values to abolish the death penalty… You, dear Maryam, are the personification of the hopes of the people of Iran.”

“Continuing to recognize the tremendous leadership of Madame Rajavi, the sacrifices will not be in vain. Much hope for victory is near. Let’s join our voices to the youth who are chanting freedom is our inalienable right.”

“…we are witnessing that we are united, and the voice that is uniting us is Maryam Rajavi. She is leading the democratic struggle in Iran.”

“I would like to thank Mrs. Maryam Rajavi. You inspire each one of us. It is in our interest to see a free Iran in our generation. I add my voice to hundreds of my colleagues here and around the world.”

It is time to raise our voice for the Iranian people. I support your endeavor for a free Iran.

“The people of Iran deserve freedom from the oppression and tyranny of the mullahs.”

“The NCRI is capable of leading the people to freedom and bringing democratic change in Iran.’’

‘’The gap between the people and the government has grown wider and wider. Iran has an alternative, the NCRI. The Iranian people have a great opportunity in the ten-point plan.’’

“We are former political prisoners who have suffered the regime’s torture. We will continue our efforts until the overthrow of this regime.’’

Robert Joseph, former US Undersecretary of State for Arms Control and International Security

“We owe it to the martyrs and the future. We must support the democratic resistance… Mrs. Rajavi and the ten-point plan provide a plan of action for a free and democratic Iran.’’

James Conway, 34th Commandant of the US Marine Corps

“The regime has had a tough year. No other country shoots its citizens dead when they come to the streets to protest. The NCRI has done much over the years to correct what is happening in Iran. Don’t be discouraged. Don’t lose faith.”

John Prichard, Bishop of the Church of England

‘’…call on our government to hold the regime to account for its human rights abuses and do more at international human rights organizations to end the impunity that human rights violators enjoy in Iran.”

“We call on the UK government to stand firm against the Iranian regime. Maryam Rajavi is the legitimate ambassador of the Iranian people, and she should be recognized as such by the British government.”

Theresa Villiers, former Secretary of State for Environment and Northern Ireland and Conservative Member of Parliament

“This is a crucial opportunity to keep the pressure on this brutal and repressive regime and to send a message of support and solidarity to the people of Iran that we share their goal for a free and democratic Iran.”

‘’Why is it that the regime fears Madame Rajavi? It’s for the simple reason she stands for ideas of liberty.’’

General Jack Keane, former Vice Chief of Staff of the US Army

“We in America are inspired by the Iranian people’s raw courage and by Maryam Rajavi’s leadership. “Mullahs, get lost. Free Iran. Free Iran.”

‘’The wind is moving the forces of freedom in Iran. The regime is collapsing….. at some point, these people should be brought to justice. Thank you, Madame Rajavi, for your great leadership.’’

‘’We say to the regime and the people of Iran and the people of the world that we stand with Maryam Rajavi and the goal of regime change in Iran….this gathering shows the global support for the NCRI and MEK grows larger and louder every day.’’

“This summit finds you, the resistance, as the only real hope of reaching a free Iran.

Lulzim Basha, former Mayor of Tirana, leader of the Democratic Party of Albania

‘’ We support the Iranian people’s goal for a secular, democratic and non-nuclear country.’’

‘’MEK is the flag of the future freedom of their country. ‘’

Patrick Kennedy, former Member of the US House of Representatives

‘’Freedom, human rights, will extinguish the awful insidious virus of religious fascism. It’s great that we have organizations like NCRI and MEK to bring that about.’’

“As a woman, I want to see the Iranian women pursue their ambitions as citizens….I admire what you do for the people of Iran and wish you success.”

‘’The NCRI has adopted a 10-point plan…. this 10-point plan is something that all good people want for their country.’’

“The people of Yemen stand with you against this dictatorship. We support the ten-point plan of Mrs. Rajavi.”

‘’I am committed to doing everything I can to help the people of Iran to have the freedom and the economy you want them to have. ‘’

“We stand with you, stand with the brave Iranian people. You are putting everything on the line for your god-given right to freedom.”

‘’Thank you to Madame Raajvi on everything she’s done. I want to encourage young people to continue your fight, your resistance……the people of the United States are with you.’’

“Stand with Maryam Rajavi. We are all with the people of Iran till the end.”

“I stand with Maryam Rajavi. There is no better ally than the NCRI. Is there another opposition group with support in Iran anywhere near the NCRI? No.’’

‘’The people of Iran have made it clear to the world that they want a free and democratic Iran, ruled by law, in which women are treated equal as men. These are the goals of MEK, of NCRI, of Maryam Rajavi.’’

Dr. Matthew Offord, Member of the British House of Commons

“120 members of the British House of Commons and Lords have declared their support for the protests in Iran, and the ten-point plan of Madame Rajavi.’’

“Thank you for your efforts. In 2018, the regime made a terror attempt against all of us at the Free Iran rally in Paris. ‘’

“We can change the future of Iran and the world.’’