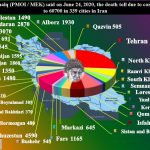 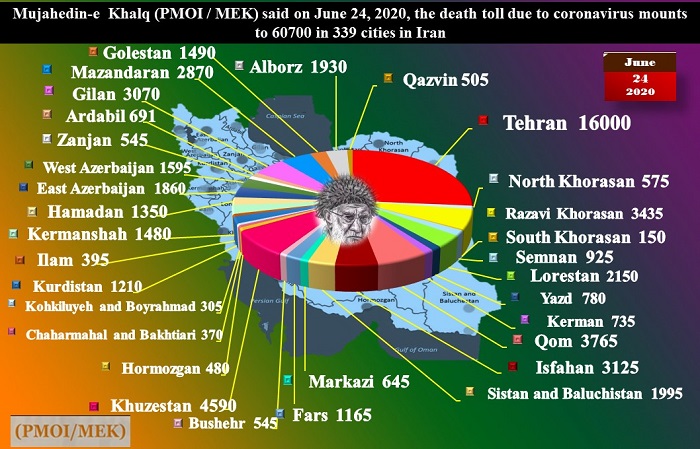 The number of people who have lost their lives to COVID 19 so far in Iran is now more than 60,700 across 339 cities and 31 provinces, according to data put together by the Iranian opposition People’s Mojahedin Organization of Iran (PMOI / MEK Iran). However, the official death toll announced by the regime is only 9,863.

More than 60,700 people have died of the novel #coronavirus in 339 cities checkered across all of #Iran's 31 provinces, according to the Iranian opposition PMOI/MEK. pic.twitter.com/ipXHAW1cDj

The data for some of the provinces is:

The Health Ministry said the death toll over the last 24 hours was 121. This is a marked increase from previous days and shows there is an upward trend. Along with this is the lack of medical equipment available to treat the victims.

In Tehran, in Baghiatollah Hospital between May 21 and June 20, every day at least 290 people were seeking treatment for the virus. At the moment, 150 patients are in serious condition. To make matters worse, 200 hospital workers have caught COVID-19 and three have so far died, one of whom was a nurse.

There is evidence to indicate that in Tehran’s hospitals there are 71 patients in ICU as reported by the regime’s official IRNA news agency.

Round up of provinces and COVID-19

So far, there is no indication that the regime is succeeding in its fight against COVID-19 and the regime hasn’t helped at all with support and advice to the victims of the pandemic.

Mrs. Maryam Rajavi is the President-elect of the National Council of Resistance of Iran’s (NCRI)Instead of helping the people of Iran, and shutting down non-essential businesses temporarily, the mullahs sent workers and toilers to work, and yet they claim that the people observed less than 9 percent of all the hygiene protocols.