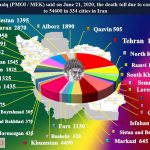 Written by Mohsen Aboutalebi on June 22, 2020. Posted in NEWS 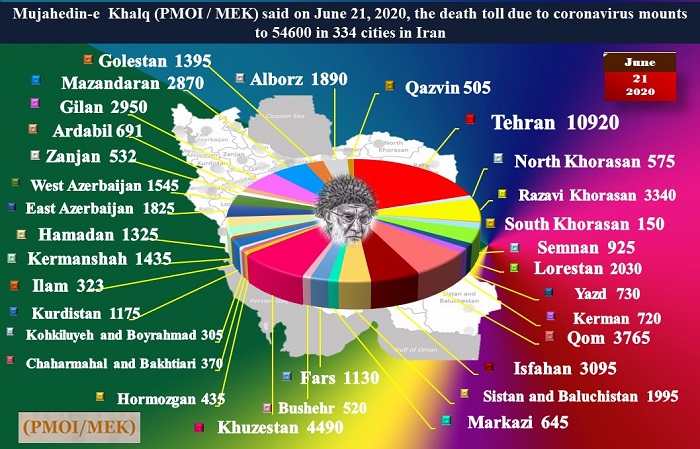 The number of deaths reported by the opposition (PMOI / MEK Iran) has risen to 54,600.

Figures reported by the opposition (PMOI / MEK Iran) for a few selected cities in Iran are as follows:

The regime’s own Health Minister, Saeed Namaki, said that the country was still in the grip of the first wave. Covid-19 was nowhere near over, he reminded the country. In his opinion, the virus may still be around for the next couple of years. “We have not passed the peak of the disease, and Coronavirus is a complex virus with a hundred thousand faces,” Namaki said.

A member of the National Coronavirus Combat Taskforce (NCCT), Massoud Mardani, said that just when they thought the virus had been suppressed and coronavirus wards were emptying, they were now having to open the up to a new wave of infections. Ardani went on to say that there were 10 red provinces declared. “If the situation continues like this,

we will be dealing with the disease until the end of the year,” he said.

The head of the NCCT in Tehran, Alireza Zali, said that all indicators of the disease show that it is now again on the rise. The change in infection rates has put additional strain on the health system and those who work in it, he said.

A deputy in the regime’s parliament from Ahvaz was quoted as saying that it was concerning that the statistics were not being revealed for Khuzestan. He said that people were dying every day and this had brought a new level of fear and worry to ordinary people in the province. He said also that it was necessary to stop people from going to mass gatherings like funerals and weddings; otherwise, the spread of the disease could intensify further.

Over 54,600 people have died of the novel #coronavirus in 334 cities checkered across all of #Iran’s 31 provinces, according to reports tallied by the Iranian opposition PMOI/MEK as of Sunday afternoon local time, June 21.https://t.co/pf9fka6fgJ

Here are some other reports from centers in Iran in brief:

Fars Province: An unprecedented rise in Covid-19 infections with more than 9,500 cases confirmed and no end in sight.

East Azerbaijan: More temporary facilities and extra beds have been made available in anticipation that the situation may get worse. According to the president of the Tabriz Medical Sciences University, there are over 350 new infections every day in Tabriz, and a third of these test positive for Covid-19.

The Mehr news agency reported that there were 259 new cases of the disease in a 24 hour period in Kurdistan. The president of the Medical Sciences University said that up to 30 percent of the population has now been infected.

The Governor of the Central Province said that there had been a five-fold increase in COVID infections quite recently. “This is dangerous,” he said.

Bushehr: The fact that there has been a rise in cases is disturbing, according to the Governor. He said that the number of people needing hospital treatment has begun to become unmanageable.

Alborz: There has been a 30 percent increase in infections, according to the  president of the Medical Sciences University

Hormozgan: Military hospitals have been made ready and are in use to treat Covid-19 patients.

Lorestan: Up to 200 new cases every day are confirmed according to the ISNA news agency.

Mrs. Maryam Rajavi is the President-elect of the National Council of Resistance of Iran’s (NCRI): As a result of Khamenei’s, Rouhani’s anti-human policies, Coronavirus is ablaze and taking lives all over Iran