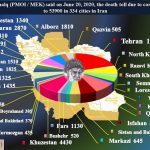 Covid-19 Crisis in Iran Worsening by the Day 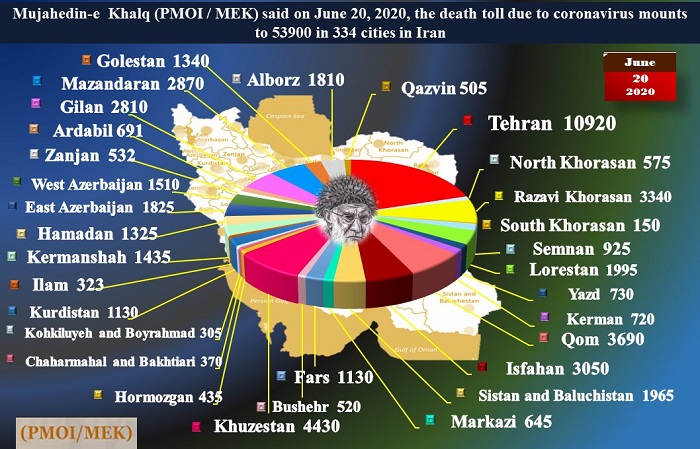 According to the (PMOI /MEK Iran), there has now been 53,600 death toll across 334cties across Iran.

The Iranian regime’s strategy to the Covid-19 epidemic ravaging the nation seems to hope that it will go away. Unfortunately for the regime, it isn’t. Viruses don’t listen to incompetent religious fascists like those in charge of Iran’s government.

The latest hotspot, so bad that it has been labeled as going from a red zone to a black one, is in Bushehr in Southern Iran. The number of cases of the disease has gone past 4,000 with the death rate higher than it has ever been at any stage this year.

The Fars news agency reported that there had been an average of 227 new Covid-19 infections each day in Bushehr. The agency stated that various factors had turned the red zone status of this area into a black one. These were the regime’s insistence on lifting any restrictions imposed in the earliest phase of the epidemic without putting in place any measures designed to limit the spread of the disease once people went back to ‘normal.’

According to the Iranian opposition (PMOI / MEK Iran), there have now been 53,900 fatalities across 334cties across Iran. The MEK’s figures contrast strongly with the official figures released to the WHO by the regime. The regime’s figures claim that only 9,392 Iranians have died from Covid-19, a figure only one-sixth of that which has been carefully collated by the opposition within Iran.

Just a few of the fatality figures for some Iranian cities are as follows:

The Zahedan Medical Sciences University dean was pessimistic about the state of the disease in Sistan & Baluchistan. “In the past week, this illness has reached a critical stage and we have had 11 deaths in the past 24 hours,” he said.

The deputy dean of the Tabriz Medical Sciences University said that there had been a surge in deaths in the city of Tabriz in northwestern Iran. “The province of East Azerbaijan has in the past few weeks remained a code red area… The cities of Ahar, Bonab, Mianeh, Haris, Hurand, Shabestar, Hashtroud, and Tabriz have the highest number of cases per capita,” he said.

In Razavi Khorasan province, 3,000 new cases of Covid-19 have been recorded in the last10 days. More than 180 people have died from the disease. People are reporting to testing and treatment centers in Mashhad every day. 19 people died of Covid-19 in Quran.

In Khuzestan, it is a similar depressing story, according to the IRNA news agency. The province has been in a code red status for the past month, but this hasn’t stopped a surge in infections.

According to a report by ISNA, the caretaker at the Jondishapur Medical Sciences University in Ahvaz was quoted as saying that the special care facilities and ICU ward at the hospital were full.

The governor of Ganaveh, according to the Hamshahri Daily, has said that the epidemic is spreading with more and more infections every day. “All roads leading to Ganaveh beach will be blocked. Also, all recreational facilities will be shut down until July 5,” according to the governor.

The situation in Kurdistan is also bad. According to an MP from Saqqez and Baneh, the authorities are basically doing nothing to stop the spread of the virus in the province. ‘This has caused the coronavirus outbreak to reach a critical scale in Kurdistan,” he says. “The public’s concerns about the future days of this province have reached a peak.”