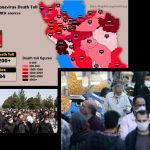 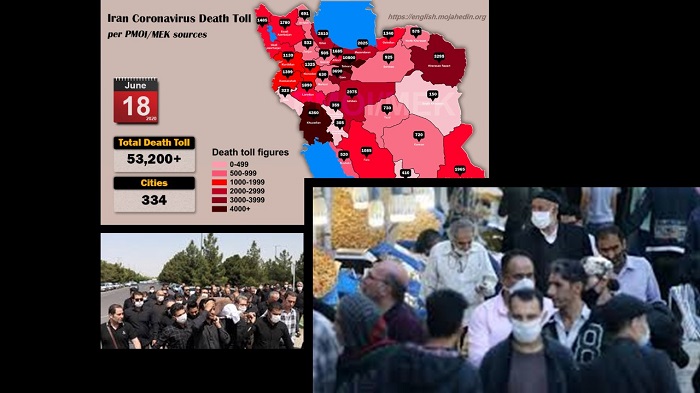 The People’s Mojahedin Organization of Iran (PMOI / MEK Iran) has reported that 52,800 people have died.

The People’s Mojahedin Organization of Iran (PMOI / MEK Iran) has reported that 53,200 people have died after contracting Coronavirus. Every single one of Iran’s 31 provinces has been affected, and 334 cities have had cases.

The Iranian regime, on the other hand, is reporting that 9,185 people have died. This is almost one-sixth of the figure reported by the (PMOI / MEK Iran). The regime has been consistently under-reporting the true figure since the beginning of the outbreak – something that the opposition expected, hence its interest in revealing the truth.

More than 53,200 people have died of the novel #coronavirus in 334 cities checkered across all of #Iran's 31 provinces, according to the Iranian opposition PMOI/MEK. pic.twitter.com/h7CLi0VpSf

On Wednesday, the regime’s Ministry of Health announced 120 new deaths and 2,612 cases in just 24 hours.

The day previous to this, the head of the Coronavirus Task Force in Tehran announced that there were 254 Coronavirus patients in the hospital that day across the province of Tehran. Alireza Zali said that this represents a 5 percent increase in just one day.

Speaking about the situation in the province of Razavi Khorasan, a provincial official said that many cities are in a critical state. He said that the city of Mashhad is in particular trouble with the virus. The city of Taybad also has a significantly high number of patients hospitalized due to the virus.

The dean of the Medical Sciences in Golestan said that the province has several counties that are struggling badly with COVID-19, indicating that there are currently more than 300 people in hospital requiring medical assistance.

The people of Iran have been neglected by the Iranian government during this major health crisis. They have been left extremely vulnerable and the situation is very worrying, in particular for prisoners and the large number of people living in poverty in the country.

#Iran: #Coronavirus Death Toll in 334 Cities Surpasses 53,200
Iraj Harirchi, the regime’s Deputy Health Minister, said, “It is expected that the country will be affected by the Coronavirus for the next year and deaths will continue as a result of that…https://t.co/yu8cuMBRau

The National Council of Resistance of Iran (NCRI) has highlighted the situation for prisoners in Iran, stating that cases in prisons are not being managed properly. Often infected prisoners are left with the rest of the prison population, meaning that the virus is certain to affect a large number of inmates.

President-elect of the NCRI, Mrs. Maryam Rajavi, highlighted that the Iranian regime has “dismantled the country’s medical, health and welfare foundations to a large extent” over the past 40 years, meaning that the country and the people are unable to defend themselves against pandemics like the one the country is experiencing now.

The people of Iran are desperate to see the regime collapse. They are sick of the regime’s destructive policies, both at home and abroad, and they want the chance to experience freedom, human rights, and democracy.

It has become clear that nothing will put the people off moving towards this goal. The people know that the regime will try to silence them in any way possible, but they are going to resist. The more the regime suppresses the people, the more they will resist. And thankfully the people have the support of the (PMOI / MEK Iran) and the NCRI which are working alongside the people with the same goals.