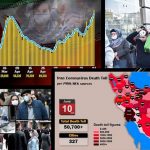 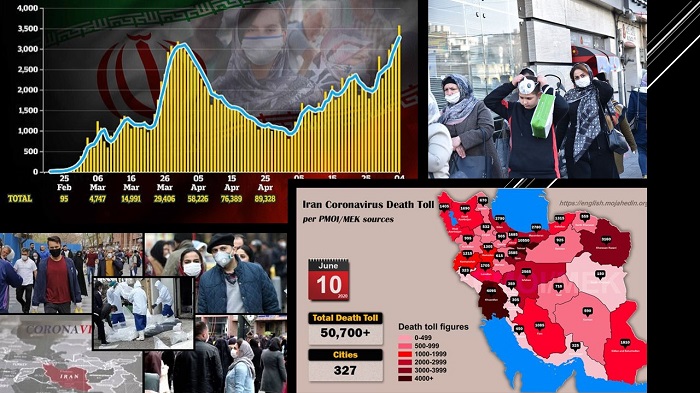 MEK Iran: Iranian regime is responsible for the new wave of the coronavirus outbreak.

The People’s Mojahedin Organization of Iran (PMOI / MEK Iran) has reported that at least 50,700 people have died from coronavirus in Iran, as of Tuesday, while the regime reported a death count of 8,425, roughly a sixth of the true figure.

More than 50,700 people have died of the novel #coronavirus in 327 cities checkered across all of #Iran's 31 provinces, according to the Iranian opposition PMOI/MEK. pic.twitter.com/WCeZSNnekK

The most recently updated death toll in the provinces are:

Doctors in Tehran hospitals have been reporting that the number of people admitted to hospital increased in the last week of May compared with a previous couple of weeks, no doubt because the regime sent people back to work in April without waiting for the pandemic to be over.

Even an advisor to the Health Minister admitted that the crisis is worsening, with cases rising and that Iran lifted restrictions too quickly.

Mohammad Reza Shams Ardakani said: “The people should know that we will be living with the coronavirus epidemic for the next one or two years… We in Iran acted more quickly than Europe in reopening our systems. We believed the situation was normalizing while it was not… Each coronavirus test costs the government around 4 million rials (about $22.40)… I am certain that if the situation gets worse the quarantine restrictions will most certainly be reimplemented and this indeed should take place.”

More than 50500 people in 327 cities in Iran have died from #coronavirus the disease caused by the novel coronavirus, according to the latest report from the #PMOI #MEK #Iranhttps://t.co/ZNmZuTO8GH #IRGCTerrorWithoutBorders #Iranian @USAdarFarsi #MullahCovidHolocaust pic.twitter.com/gv8OEpNeF4

A member of the Bandar Abbas city council said: “The lack of proper management can result in an irreversible catastrophe that will threaten the lives of thousands of citizens.

The authorities don’t have a proper solution for the coronavirus outbreak… Then, the responsibility of officials will be heavier because they’re blaming the people for the spread of the virus while they haven’t taken any concrete action to contain the virus.”

While Alireza Zali, the head of Tehran’s COVID-19 Task Force, said that there was a 3.5% increase in the number of people seeking medical care in health centers and hospitals between Sunday and Monday.

Harirchi, Deputy Health Minister, said for the first time on June 6 that the number of fatalities may reach 300 thousand.

Mohammad Reza Mahjub, a member of the Coronavirus Task Force, said: “Poor government management and the lack of oversight and control… are among the reasons the disease is peaking again in its past hotspots and clean regions of the country… the prioritization of economy and the policy of herd immunity has driven the country to the point that… coronavirus has peaked again in the country, and the disease is not managed and contained in the country.”

Mrs. Maryam Rajavi is the President-elect of the National Council of Resistance of Iran’s (NCRI). She said the mullahs’ inhuman regime is responsible for the new wave of the outbreak and the growing number of victims in Iran. They do not think of anything but further plunder and preservation of their disgraceful rule.