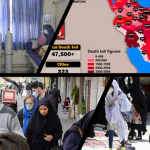 Written by Jennifer Jones-Kelley on May 29, 2020. Posted in NEWS 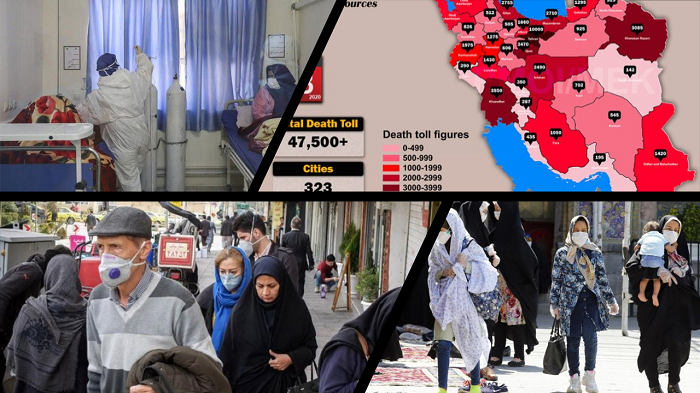 MEK Iran: Well over 10,000 people have died from COVID-19 only in Tehran Province.

More than 47,500 people in 323 cities in all 31 provinces in Iran have died from COVID-19, the disease caused by the novel coronavirus, according to the latest reports from the MEK Iran. The regime has confirmed only 7,627 of these deaths.

The number of coronavirus deaths by province includes:

More than 47,500 people have died of the novel #coronavirus in 323 cities checkered across all of #Iran's 31 provinces, according to the Iranian opposition PMOI/MEK. pic.twitter.com/EZe5KHSyW5

According to the MEK Iran, well over 10,000 people have died from COVID-19 in Tehran Province, according to reports from dozens of hospitals and cemeteries. The regime’s Ministry of Health has been forced to acknowledge the severity of the crisis in Tehran, although they have been careful to avoid mentioning any numbers that would contradict the official death toll.

On Wednesday, a member of the regime’s COVID-19 Task Force was quoted as saying, Twelve percent of the coronavirus patients that visit a hospital lose their lives” and “50 percent of COVID-19 patients that enter ICU sections also die,” according to the official IRNA news agency.

On Monday, May 25, Health Ministry spokesperson Kianush Jahanpour explained why the regime’s official coronavirus statistics are so far off the mark. “PCR tests are the index of confirmed cases regarding COVID-19 patients. We cannot confirm a case without such a test,” he said. It is worth noting that regime President Hassan Rouhani recently claimed to have produced enough testing kits to cover domestic needs and is planning to export kits, masks, and ventilators to other countries.

The regime has resorted to many tactics to save face as the number of victims has grown, from minimizing the death toll to blaming the citizens of Tehran for the crisis.

On Monday, May 25, Deputy Health Minister Iraj Harirchi took the latter approach when attempting to explain the recent surge of infections in Tehran. Deputy once again resorted to further lies and blamed the Iranian people for this tragedy. “Thirty-three percent of the people in Tehran did not abide by hygiene protocols and in many cases, Tehran is our Achilles heel… This is especially true in the outskirts of Tehran and cities located around the capital that are highly populated and have other issues,” he said in remarks aired by state TV.

Harirchi neglected to cite the impact the regime’s decision to lift quarantine restrictions in April played in the second wave of infections, despite the clear correlation between the events. He also chose to ignore the fact that his own Health Ministry as well as the COVID-19 Task Force recommended against lifting quarantine restrictions, warning that the action would result in a surge of new infections.

New Infections in Other Provinces

The second wave of infections has led to an increase in hospitalizations in several cities and provinces and caused several university physicians to sound the alarm.

The President of the Medical Sciences University in Kermanshah recently warned, “The increase of the number of hospitalized coronavirus patients in the province is worrying. If the trend continues, we will face an outbreak of the disease,” in remarks published by the official Javan daily.

A public relations spokesperson for the Medical Sciences University in Kermanshah added, “No county in the province is white. The three cities of Kermanshah, Javanrud, and Harsin Salas Babajani are red. The situation in other cities is alarming.”

On Wednesday, May 27, the Revolutionary Guards-affiliated Fars news agency quoted the Dean of the Medical Sciences University in Dezful, who said, “The number of positive coronavirus cases in Khuzestan province and the county of Dezful has increased. This is why Dezful, like other locations in the province, is red.” The deputy dean said, “Eight big sections of the great hospital of Dezful are dealing with coronavirus patients, 130 medical staff in the university of medical sciences and sanitation of Dezful have contracted coronavirus.”

The Dean of Hormozgan Medical Sciences University also expressed concern in remarks carried by the ISNA news agency. “In the past week, the number of coronavirus cases in Hormozgan has increased. The situation in Minab is worrying,” he said.