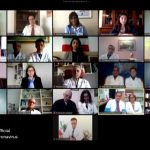 Written by Esmail Mohades on March 8, 2020. Posted in NEWS 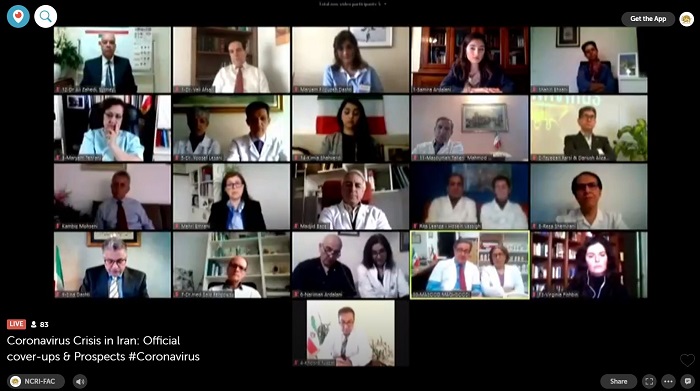 The physicians, supporters of MEK, joined an online conference, giving their account on the Iranian regime’s cover-up on Coronavirus outbreak in Iran, and the prospects of this crisis-March 8, 2020

Physicians, medical experts and nurses among the Iranian diaspora, supporters of the People’s Mojahedin Organization (MEK) and the Iranian resistance, from 25 different locations participated in an online conference held this Sunday on the dreadful spread of the Coronavirus in Iran.

#BreakingNews
Online Conference by Medical experts, supporters of #MEK and the #NCRI on the #COVID19 outbreak in #Iran
Please sharehttps://t.co/LdNY4jXrNa#CoronaVirus#CoronavirusOutbreak

Coronavirus infection’s death toll rose to 2300 today, according to an NCRI statement based on information from the MEK.

Participants in the conference stressed the fact that the culture of opaque and mismanagement, as well as hoarding of medical gear by the Islamic Revolutionary Guards Corps (IRGC), was killing healthcare workers, making their mission to help the population extremely difficult. They asked the World Health Organization and other related international bodies to send supplies to the Iranian people, doctors, and pharmacists, but not the government.

“We Iranians are fighting two enemies. One is COVID-19 and the second is the Iranian regime,” said Dr. Sina Dashti, an infectologist from Sweden. “Transparency is key to fighting epidemics. The regime is preventing news of the epidemic from being broadcast.”

Participants agreed on the fact that the international community has lost trust in the Iranian regime after it cracked down on the November uprising by the Iranian people and tried to cover up the shooting down of the Ukrainian passenger plane over Tehran in January.

“In Lombardia, we have more than 5,000 cases and more than 200 deaths. Our hospital has established different departments focusing on infected patients. The Italian government has taken measures to inform people on how to deal with the virus if they are infected and how to prevent the spread of the virus,” said Dr. Masoumeh Taheri, a rheumatologist in Italy.

Dr. Masoumeh Taheri, Romatolog in #Italy
I'm occupied working in the red area with killed patients from #Coronavirus but just look at the state of #Iran!
The regime has left the people unprotected and we fear the worst for prisoners. pic.twitter.com/O33Cz8HkN2

“Quarantine measures were not implemented after the first infection was seen in the city of Qom. [Iranian regime President Hassan] Rouhani and Khamenei are responsible for putting Iranians’ lives at risk. Political prisoners are in danger. I call on the international community to condemn the regime and help save the lives of the people of Iran and political prisoners,” she continued.

Dr. Massoud Maghsoodi, a pharmacist in Michigan, USA, also deplored the lack of quarantine on the part of the regime to control the virus’ spread.

Dr. Massoud Maghsoudi from US, asks his fellow pharmacy friends to educate the people of #Iran about keeping safe in the face of #Coronavirus
Isolate infected people, identify them, don't get in contact with them. Be prepared for worse to come.
Calls on Health Org @WHO to visit! pic.twitter.com/mrff5YYwvv

“China quarantined many cities to stop the spread of the disease, but the Iranian regime did take no action to stop the virus spread. Now that the virus has expanded to too many cities, (the regime’s supreme leader Ali) Khamenei says ‘we have seen worse’ and ‘people should pray’,” he said. “We urge the World Health Organization to send a group to Iran to investigate the situation.”

Participants said they were worried that the regime and the IRGC in command of the situation profit from the situation to “fill their pockets”.

“Mahan Air (related to the IRGC) continues its flights to China. It is of the utmost importance that people are provided with the means to protect themselves. I call on the UN and international community to help the people of Iran,” said Dr. Kimia Shahverdi, a pharmacist in Germany.

“There are 194 deaths and 6,000 infections, according to the Iranian regime’s own statistics. For every diagnosed patient, there are 800 patients who have not been diagnosed. More than half a million people are infected in Iran. The Iranian opposition National Council of Resistance of Iran (NCRI) has managed to obtain the figure of more than 2,000 fatalities. If we take this number into account, more than a million people in Iran are infected,” said Dr. Ali Zahedi, a physician in Australia.

Regime of #Iran only cares of its own agenda, nuclear+elections causing corruption. Forgetting the people 40yrs. #UNSC must intervene to bring this catastrophe under control.
From 194 that officials have announce many are left untreated that passes #Coronavirus pic.twitter.com/6PEOePXTTX

Warning of the increasing exposure of prisoners in Iran to Coronavirus, and the spread of the virus in many prisons, Maryam Rajavi, the President-elect of the NCRI, called on the United Nations Security Council, the Secretary-General, the Human Rights Council, the High Commissioner for Human Rights, and on other relevant international organizations to take immediate action to save the lives of prisoners, particularly political prisoners that are under torture and additional limitations and pressure.