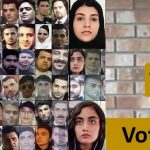 Written by Mohsen Aboutalebi on February 25, 2020. Posted in NEWS

At long last, Abdolreza Rahmani Fazli, Iran’s interior minister announced Friday’s election result. There were a total of 58 million people who were allowed to vote, but only 24.5 million actually showed up to vote, a 42.5 % voter turnout. However, in reality, based on the MEK Iran network, less than 10% took part in the mullah’s election. Even based on the regime’s announcement, this sham election has experienced the lowest voter turnout since 1979. It didn’t do much to help the mullahs who were expecting higher numbers at the ballot box. Added to the woes of the election result were several reports of regime officials being seen buying votes with cash and regime forces turning out to vote at several polling stations, so exaggerating the turnout figures.

Vote likely to affect the regime’s domestic and foreign policies

The regime’s supreme leader, Ali Khamenei, once he knew the results, glorified them by saying that the result showed the voters hadn’t given into opportunists promoted by propaganda.  He also acknowledged his defeat, but not openly. To cover it up, he suggested that millions of people needed to be organized to defend the regime. He is aware that the results will affect both domestic and foreign policies.

The huge network of activists for the People’s Mojahedin Organization of Iran (PMOI/MEK Iran), who are trying to improve the lives of Iranian people but can only do it undercover because of the high risk of being imprisoned, have been criticized by Khamenei. He suggested that his regime will be terrorizing the MEK Iran for opposing the regime.

Evidence of the first signs of the defeat

The principalists have engineered the election to suit themselves and have as a result won a landslide victory. They did so well that they took all the seats in Tehran. However, it is the so-called reformists who consider that the principalists are responsible for the low turnout. They seemingly purged so many candidates that it resulted in little interest by the voters to turn out and vote. Hamdeli, the so-called reformists’ news website, reported that it was the worst election in history.

Who should have won the election?

Freedom of speech isn’t present in Iran, but the majority of the population has proved that they don’t want either the Khamenei regime or the principalists by the calls from the resistance when they have dared to set foot on the streets of Iran.

Mrs. Maryam Rajavi, the president-elect of the National Council of Resistance of Iran (NCRI), got it right in a post-election speech when she said the boycotting of elections was a vote for getting rid of the ruling religious fascists. The absolute defeat of the mullahs this time round is paving the way sooner rather than later for an overthrow of all those in or out of power leading to a takeover by the resistance movement.