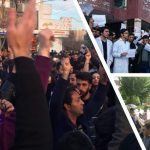 Written by Mohsen Aboutalebi on February 8, 2020. Posted in NEWS 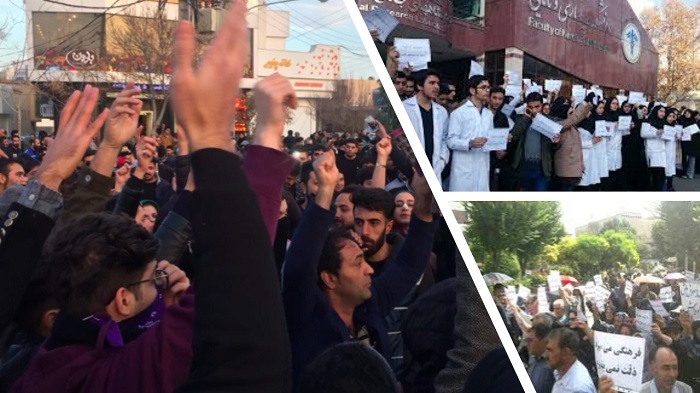 Protests in Iran expands as mullahs are weakened- File Photos

Regime security forces are cracking down on protests as the February 21st parliamentary election grows near. Regime officials are fearful that recent calls for a boycott of the election could lead to dismal voter turnout, further delegitimizing a government that is already on the brink of being overthrown.

As a result of these fears, security forces are attempting to stamp out any sign of dissent before it can spread into calls for regime change, and officials have announced a series of harsh sentences for activists. Despite intimidation and suppression, protests are still taking place in various cities with help from Mujahedin-e Khalq (PMOI/MEK Iran) Resistance Units.

On January 29, 2019, Mohammad Reza Ramezanzadeh, Saeed Paghparast, Ali Forutan, Mostafa Robati, Hassan Johari, Hamidreza Rajaie and Hossein Ramezanpour were sentenced to a total of 41 years, 8 months in prison, 222 lashes, and ordered to pay 30 million rials in court fees. The men are all members of the Northern Khorasan Province Teachers Union who were imprisoned for their peaceful political activities. Membership in labor unions is illegal in Iran.

On Thursday, February 6, 2020, a group of teachers held a gathering in North-western cities of Saqqez and Zivouyeh protesting the imprison sentences of members of the teacher’s union.

On Thursday, February 6th, regime security forces were deployed to a derby game at Azadi Stadium in Tehran in anti-riot vehicles mounted with water cannons to prevent a possible anti-regime protest at the game.

Retired oil workers in Arak, western Iran rallied outside of the Oil Industry Retirement Fund building in protest of the privatization of the fund and other steps taken by authorities to merge the fund with the Kermanshah Province Retirement Fund. 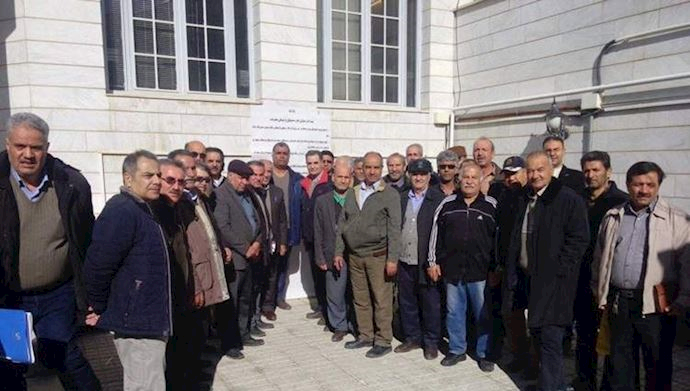 Nurses employed by medical schools and universities in Urmia, northwest Iran are protesting in demand of their delayed paychecks. The nurses have not been paid for the past 11 months and are owed five months of overtime. MEK Iran sources inside Iran report that other hospital employees have not been paid since November 2019.

The nurses have filed numerous complaints, but no action has been taken to pay the employees for their work. The Iranian regime has an extensive history of failing to pay its workers for months or years at a time. Teachers, steelworkers, retirees, and municipal workers are among the many groups who have gone on strike in protest of delayed paychecks or pensions.

On Wednesday, February 5th, nurses rallied in Hamedan, western Iran to protest officials’ failure to take adequate measures to respond to their housing concerns. Dozens of nurses attended the rally.

As calls for election boycotts grow, the largest protest may be the absence of Iranians at the polls on February 21st.