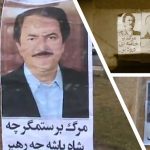 Written by Mohsen Aboutalebi on February 6, 2020. Posted in NEWS 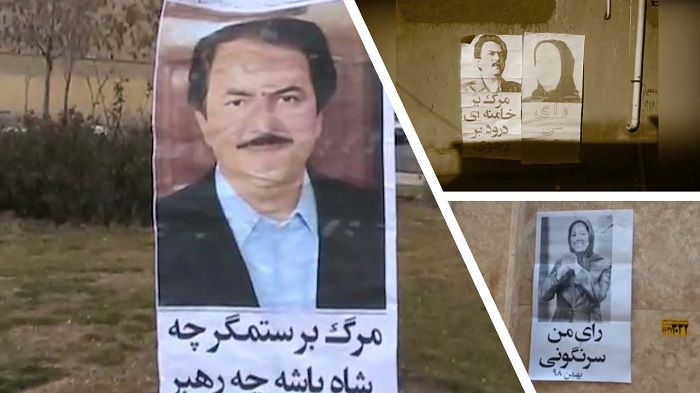 Resistance units of the People’s Mojahedin Organization of Iran (PMOI/MEK Iran) across Iran have been increasing their anti-regime activities over the past week by installing posters of Massoud Rajavi, the Iranian Resistance leader, and Maryam Rajavi, the President of the Iranian opposition coalition National Council of Resistance of Iran (NCRI), across the country.

They’ve also been destroying posters of Qassem Soleimani, the now-dead Revolutionary Guards (IRGC) Quds Force Commander, in order to show their utter hatred of the mullahs’ regime and its terrorist in chief. They are refusing to allow the regime to promote the image of a man whose hands are drenched in the blood of thousands of Iranians, Iraqis, Syrians, and others.

Resistance units putting up posters of the Rajavis in Tehran, Shahroud, and Ahvaz, chanted:

Iranian opposition group PMOI/MEK network members call for further protests in Iran. Resistance Units install banners of Massoud Rajavi and take to graffiti against the regime, spreading slogans against the regime in Iran.#Iranhttps://t.co/f2mGWPK5zP

Elsewhere in Tehran, resistance units graffitied walls with the slogans:

In Karaj, rebellious youth set fire to tires to block roads and prevent the regime’s security forces from entering certain areas, while in Borazjan, they installed a poster of Massoud Rajavi with the slogan “The MEK Iran are specifically seeking to establish the rule of the people based on the ballot box”.

#Iran: Office of Khamenei’s Representative in Mashhad (Alam al-Hoda)Targeted. He is among the most criminal regime leaders, responsible for executing &murdering young people in Tehran and Khorasan. https://t.co/A5cly7Hs6u#FreeIran2020#IRGCTerrorists#IranRegimeChange

At this point, it’s important to remember that any support for the MEK Iran in Iran could carry the death sentence. In June 2014, according to Amnesty International, MEK Iran supporter Gholamreza Khosravi Savadjani was executed for sending a small amount of money to the MEK’s satellite TV network, Sima-ye Azadi (Voice of Freedom). Savadjani “was arrested in 2008 in Rafsanjan, Kerman Province.