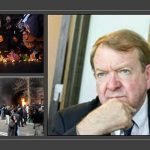 Struan Stevenson: Iran Is in the Calm before the Storm

Written by Esmail Mohades on February 5, 2020. Posted in MEK (PMOI) IN MEDIA 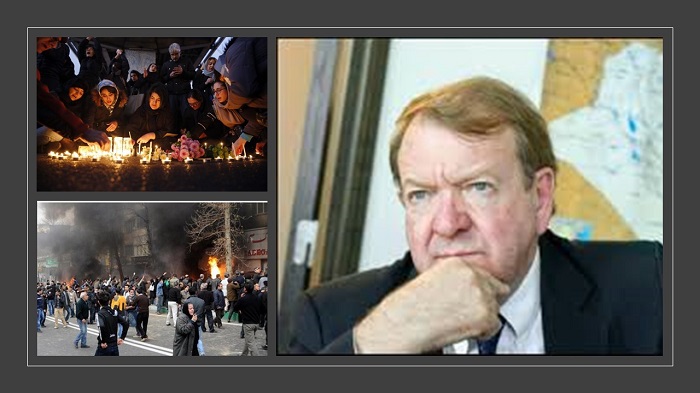 Stevenson writes an article about Iran Protests and Iran’s future

United Press International published an article by Struan Stevenson on Monday predicting the imminent fall of the Iranian regime. The article, entitled “Iran protests are in the lull before the storm,” describes in detail the current state of affairs in Iran following the November Uprising that brought millions of Iranians into the streets to protest the regime.

Aftermath of the Uprising

Stevenson writes that the uprising in Iran has subsided for the moment, but he adds, “Sporadic outbursts of protest still take place, as thousands mourn their family members, murdered by the Islamic Revolutionary Guards Corps…during their ruthless crackdown on the uprising.

Stevenson reports that thousands of injured patients were dragged from hospitals and imprisoned alongside the 12,000 people who were arrested during the protests. Mujahedin-d Khalq (PMOI/MEK Iran) sources inside Iran report that arrested protesters are being tortured and denied medical treatment.

“Iran is a powder keg of unrest’” writes Stevenson. “The slightest spark will ignite a revolution, which will drive the theocratic regime from office and restore freedom to Iran’s 80 million enraged citizens. It is the lull before the inevitable storm.”

According to Stevenson, the widespread discontent among the Iranian people has created a sense of fear and distrust between the regime’s various factions. In a desperate bid to hold onto their power, the mullahs have begun to turn on each other.

Regime Supreme Leader Ali Khamenei has ordered the Guardian Council, which supervises elections, to bar members of regime President Hassan Rouhani’s faction from participating in this month’s Majlis (Parliamentary) elections. The Council has disqualified 90 members of Majlis from running for re-election, according to Stevenson.

Rouhani has threatened to retaliate by using his Interior Ministry to stuff ballot boxes. Stevenson writes that this “may create the very spark that ignites the downfall of this gangster government.”

Regime Foreign Minister Mohammad Javad Zarif is the source of additional infighting because of his continued attempts to seek diplomatic relations with the United States. According to Stevenson, “This humiliating climbdown by Zarif has caused outrage from some of the opposing factions in Tehran, with Mojtaba Zolnouri, head of the Iranian parliament’s national security commission asking why his government was begging for concessions from America after it had assassinated their homicidal hero Soleimani. Another incensed MP Amir Hossein Ghazizadeh Hashemi asked: ‘Which country’s foreign minister are you, Mr. Zarif? Which nation? Which government? This nation wants revenge on the killers of Haj Qassem … don’t you have modesty?!’”

Stevenson posits that Zarif’s attempts to negotiate with the United States after the assassination of Soleimani gives “the clearest evidence yet of the mullahs’ weakness.” With the economy in freefall, the regime has little choice but to seek a diplomatic solution.

Support for the Iranian Resistance

On January 28th, the U.S. House of Representatives unanimously passed a resolution entitled “Supporting the rights of the people of Iran to free expression, condemning the Iranian authorities for their crackdown on legitimate protests and for other purposes.” The resolution, sponsored by Rep. Ted Deutch (D-FL), condemned the use of “lethal force” against protesters by the IRGC and concluded with a statement of support for the people of Iran who “are engaged in legitimate and peaceful protests against an oppressive, corrupt regime.”

House Resolution 752 has been passed by the US House of Representatives; condemning the #Iran regime and drawing attention to the regime’s terrorist activities across the Middle East and beyond. The vote was unanimous.https://t.co/Vhevas6JqP#IranProtests #MEK @USAdarFarsi pic.twitter.com/I1tUjWUWb1

Stevenson encouraged the European Union to follow the United States’ lead and issue their own statement of support for the Iranian people.  “A new revolution is coming, and the brave PMOI/MEK resistance units who planned and abetted the recent uprising are preparing the ground for the theocratic regime’s overthrow,” he emphasized. “The EU must ensure that they are on the right side of history. The current lull before the storm may be their last chance to do so.”