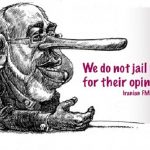 The Iranian regime is one of the most brutal regimes that exist. It is corrupt at all levels of leadership and it has plundered the country’s resources for decades.

It has a history of deceiving the international community. It tries to cover crises with lies, or at least hide the truth. It demonizes political opponents. It censors the people of Iran and manipulates the media.

This goes back to the beginning of the regime’s existence since the 1979 revolution. It has been attacking the main opposition, the Mujahedin-e Khalq (PMOI/MEK Iran), ever since then with misinformation campaigns. MEK’s offices were attacked and lies were spread about the organization in order to tarnish its reputation.

The regime has claimed that the MEK Iran has killed Iraqi Kurds and Shiites, that it has held members against their will and separated them from their families, that it has trained women to carry out suicide attacks, that it collaborates with al-Qaeda and ISIS, that they are spies for the US, Israel, and the Soviets, and a long list of lies. Khomeini also claimed that MEK Iran members deliberately injure themselves so they can blame it on the regime!!

During the Iran-Iraq War, the regime paved the way so that it could continue to remain in power. The MEK Iran proceeded with a pro-peace outlook, giving the regime even more reason to target the organization.

During the nineties, a former MOIS deputy admitted that the regime’s intelligence agency has murdered a series of individuals specifically to pin the blame on the MEK Iran.

The most recent deception came after the downing of Ukraine International Airlines PS752. Immediately after the incident, there were strong suspicions that the Iranian regime was behind it. And as time went on, damning evidence came to light. Yet the Iranian regime officials maintained that it has nothing to do with them. State-run publications declared that the plane was a “flying coffin”, pinning the blame firmly on Boeing.

Blatant lies continued. The regime said that the black boxes had not been found. Then it said one was found but that it would not be handing it over for foreign investigations. Furthermore, Iranian officials sent bulldozers to raze the crash site before an investigation took place.

Even when videos were shared on social media of surface-to-air missiles heading towards the commercial plane, regime officials declared that the videos are fake, saying it is a “plot” pursued by the opposition with US interests in mind.

Then Iranian media ran a story saying that a Ukrainian engineer gave the go-ahead for the flight to take off against the advice of an Iranian engineer that noted a serious technical error.

The people of Iran were outraged that the regime was responsible for killing almost 200 civilians.

It is very clear that lying is in the Iranian regime’s DNA. It is an essential tool for the regime when it comes to spreading terror abroad and suppressing the people of Iran. Faced with the facts, the international community must realize that the regime’s claims should always be met with skepticism. This is a lesson that the people of Iran learned a long time ago.