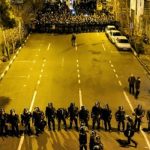 Written by Esmail Mohades on January 14, 2020. Posted in NEWS 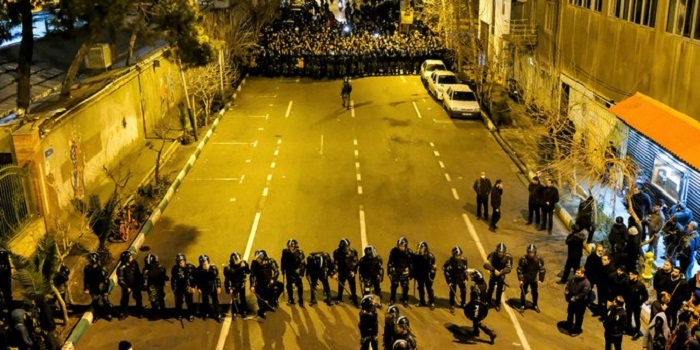 Despite the Iranian regime’s attempts to suppress the demonstrations, the protests continued for the third day on Monday, January 13 in Iran

Monday, January 13, 2019, marked the third consecutive day of protests by university students and Iranian citizens in various cities in Iran. The protests began on January 11th after regime officials admitted that they shot down an Iranian airliner bound for Kyiz, killing all 176 passengers. Many of the people on board the downed plane were Iranian university students.

The admission sparked outrage among Iranian university students, who launched protests at universities and cities across Iran. Calls for accountability from regime officials quickly turned into calls for the overthrow of the regime in its entirety. MEK Iran Resistance Units have been part of the protests and have shared video clips and images of the demonstrations with the world through social media.

The protests continued for the third day on Monday, despite the regime’s attempts to suppress the demonstrations. Security forces have attacked protesters with batons, tear gas, and live ammunition, injuring a number of people. Students and other protesters have been arrested in the cities of Tehran, Karaj, Mashhad, Zanjan, Babol, Rasht, Gorgan, Tabriz, Kermanshah, and Kashan.

At noon on Monday students at Sharif Industrial University held their third consecutive protest, where they demanded the overthrow of the regime. The students expressed grief for their fallen friends and anger at the regime for their incompetence and brutality, chanting, “Death to the dictator!” “Grief, grief is with us today – brave students are grieving today!” “Cannons, tanks, firecrackers, mullahs must get lost!” and “They killed our best and put the mullahs in their place!”

Students at Isfahan Industrial University in central Iran held a demonstration and march. The students called for the removal of regime Supreme Leader Ali Khamenei, chanting, “Down with the dictator!” and “The leader is a disgrace!”

January 13 – Isfahan, central #Iran
Isfahan Industrial University students marching and chanting:
"Down with the dictator!"
"The leader is a disgrace!"
This criticism is in direct reference to the regime's supreme leader Ali Khamenei.#IranProtestspic.twitter.com/dHrLvIm0lO

Students at Kurdistan University held a protest on Monday, chanting, “Dictator, IRGC [Revolutionary Guards], you are ISIS to us!” This chant compares Khamenei and the Revolutionary Guards to the Islamic State, which has been responsible for the brutal killing of tens of thousands of Kurds.

Locals in Sanandaj also protested on Monday, chanting, “The stupid leader is a disgrace!” The reference was aimed at Khamenei.

January 13 – Sanandaj, western #Iran
Kurdistan University students holding a gathering and chanting:
"Death to the dictator!"
"The IRGC is a disgrace!"#IranProtestspic.twitter.com/SXaCu6lm9z

Mrs. Maryam Rajavi, President-elect of the National Council of Resistance of Iran (NCRI), urged the international community to take action to free those who have been arrested in this most recent wave of protests. She called on the United Nations Secretary-General, the U.N. Security Council, the European Union, and its member states, and human rights organizations around the world to heed the call to free the Iranian protesters. She further asked once again for the dossier on the regime’s criminal activities to be referred to the U.N. Security Council and that its leaders be brought to justice.

The fury and anger of their friends in universities and cities across the country confirmed that the people of Iran will neither forgive nor forget. They will not calm down, but will cry out: The people of #Iran do not want Iran’s ruling dictatorship. #UkrainianPlane pic.twitter.com/sh5YQNVzrv

MEK Iran members both inside the country and abroad fully support the protests that are currently taking place and salute the MEK Iran Resistance Units inside the country who are on the ground facing the regime’s suppressive forces.