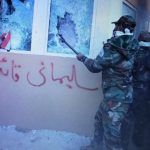 U.S Makes No Distinction Between the Iranian Regime and Its Proxies 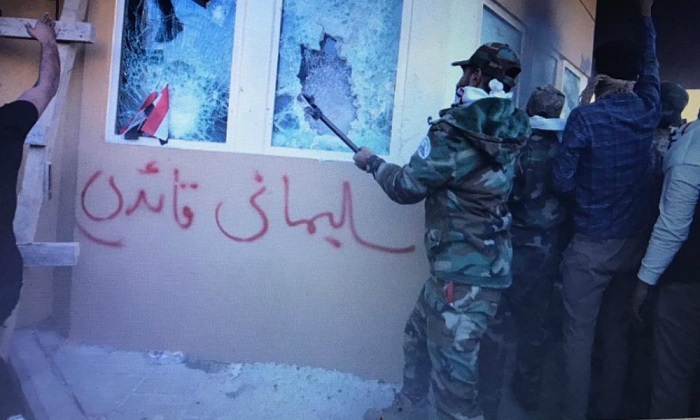 Iran backed proxy groups are attacking the US Embassy in Baghdad, the graffiti reads: “Qasim Suleimani, the Commander of the Terrorist Quds Force, is my leader”

Following the U.S. airstrikes against Iran-backed militias in Iraq and Syria, three U.S. senior State Department officials hold a telephone news conference on Monday, regarding the airstrikes and the role of the Iranian regime and its proxy militias in terrorist activities. The first senior official said that “we are not going to let Iran get away with using a proxy force to an attack to attack America interests, and we will hold Iran accountable for these attacks, which we have done,”

On December 30, 2019, the Reuters reported that the U.S. planes carried out airstrikes on Sunday against the Iranian-backed Kata’ib Hezbollah militia group in response to the killing of a U.S. civilian contractor in a rocket attack on an Iraqi military base.@USAdarFarsi pic.twitter.com/Ncowf2NJwd

He also referred to the desire of Iraqi people who have been protesting against the Iranian regime’s meddling in their country.

“We are standing with the Iraqi people.  You’ve seen the protests in Iraq…They do not want to see Iraq fall under the domination or the influence of the ayatollah and his cronies, Qasem Soleimani and others.”

The first senior official also talked about Iranian regimes’ meddling in the region and also the protests in Iraq, Lebanon, and Iran against the clerical regime.

In response to a question about the Iranian regime’s foreign minister’s visit to Russia, the senior state department official one said:

“There was a Reuters report recently out that had the regime having murdered 1,500 of its own citizens.  You have thousands that were injured and well north of 8,000 innocent Iranians have been put into jail for protesting, demanding basic human rights,”

“Now is not the time for governments to be doing any sort of military exercises with this regime.  We think now is the time to be sanctioning the Iranian leadership for the human rights abuses that it has committed against its own people and to be diplomatically isolating the regime in every way possible,”

“I would just ask those nations that don’t – they are sending a very clear message to the Iranian people that they’re siding with their oppressors and their murderers.”

In response to a question about the number of attacks over the last couple of months and the role of Iranian regime in those attacks, the senior official one said: “On September 11th of 2018, the White House issued a statement saying that we do not make a distinction between the Iranian regime and any of its proxies that they organize, train, and equip.  And Kata’ib Hezbollah certainly is an entity that the regime organizes, trains, and equips, and as a consequence, we took the necessary action.  And so this idea – I mean, Iran has been – it has been a feature of Iran’s expansionist foreign policy to conduct deniable attacks.  We are not giving Iran the fiction of deniability any longer.”