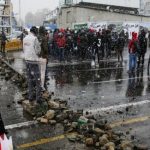 Written by Esmail Mohades on December 31, 2019. Posted in NEWS 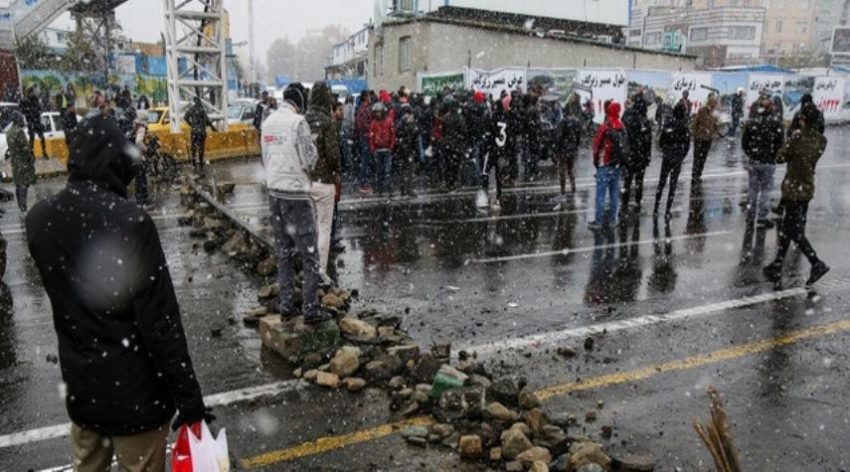 Protesters had blocked the main highway in Tehran, in order to prevent the repressive forces from attacking the protesters. November 22, 2019- Tehran

MEK Iran sources report that the regime’s torturers and interrogators have transferred a number of the wounded from hospitals to prisons, where they are being tortured. Security forces first began storming hospitals and dragging injured patients from their beds during the height of the uprising. The detainees were taken to undisclosed locations, where many still languish. Hospital patients are still being taken from their beds to squalid and overcrowded regime prisons to be tortured, despite widespread public outrage at the regime’s brutal response to the protests.

Many of the detainees in Shiraz and other provinces have been forced to go on state-run television and make forced “confessions,” in which they denounce the uprising and the Iranian Resistance. This is an established tactic of the regime that usually backfires, as detainees almost always retract their confessions once they are freed from prison. MEK Iran previously reported that even the regime’s own officials have disputed the efficacy of this practice.

Lack of Due Process

The state-run daily Etemad reported on the precarious position of the detained protesters in a December 28, 2019 interview with regime Judiciary lawyer Helale Mousavian. Mousavian has spent time with the detainees and their families.

“The main problem is that the detainees can only hire the lawyers who are approved by the head of the Judiciary and even if they do, those lawyers have been ordered not to intervene in the cases, and they don’t even have the right to read the culprits files,” he said.

“The mother of one of the detainees said that her son once called her and as soon as he wanted to tell her about the place that he was kept, he was stopped by the authorities… many prisoners don’t even know the place of detention,” he continued.

“The detainees are in the age range of 18 to 30 years old. There are also many detainees under 18 years of age, and most are 13 to 15 years old,” Mousavian added.

Many believe that this uprising is a turning point in Iran’s political &ocial spectrum. Based on the information of Iran’s main opposition group,#MEK,at least 1500 #IranProtesters have been slaughtered in cold blood in the 1st few days of #Iranprotests. pic.twitter.com/3NZTOqNhz7

International human rights group Amnesty International called on the Iranian regime to release the arbitrarily arrested protesters. The organization created a petition demanding the release of the detainees from the November Uprising and shared it in a tweet, which read:

“As part of a violent and deadly crackdown, Iran’s authorities have been arbitrarily arresting thousands of protesters who are now at risk of torture and other ill-treatment. Sign the petition and call for those arbitrarily arrested to be released. Act now.”

As part of a violent & deadly crackdown, #Iran’s authorities have been arbitrarily arresting thousands of protesters who are now at risk of torture and other ill-treatment. Sign the petition and call for those arbitrarily arrested to be released. Act now. https://t.co/aVsHicKinE

MEK Iran released the names of another 14 confirmed victims of the November Uprising on December 29th, bringing the total number of victims who have been identified to 615. More than 1,500 protesters were killed by security forces during the uprising.