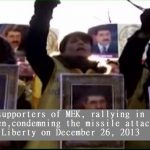 Written by Mohsen Aboutalebi on December 26, 2019. Posted in NEWS 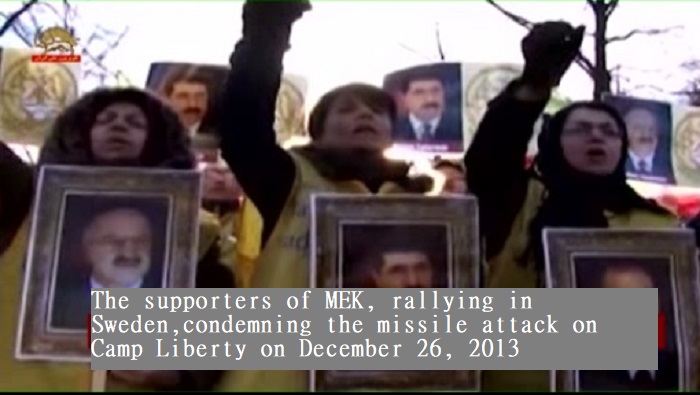 Supporters of MEK rally in Sweden in condemnation of the missile attack on MEK’s Camp Liberty, leaving 4 killed and 71 injured. The attack was carried out by the Iranian regime’s proxy forces in Iraq, under the then, Prime Minister Nuri-al Maliki. December 26, 2013

December 26, marks the anniversary of the forth missile attack to Camp liberty, the previous place of residence of the People’s Mojahedin Organization of Iran (PMOI / MEK) members in Iraq by the Iranian regime, killing four members the MEK, and leaving seventy-one others injured. At 9:15 pm local Iraq time, on 26 December 2013, Camp Liberty was attacked with dozens of missiles of different types. The attack occurred after Nuri al-Maliki, the then Iraq Prime Minister’s trip to Tehran and was a payback to the religious fascism ruling Iran to enlist the mullahs’ support for his third term as Prime Minister, which he did not achieve.

Massoud Rajavi, the leader of Iran resistance, in a video message that was broadcast from the resistance Satellite TV, Simaye-Azadi, said that the cowardice attack to defenseless MEK members was an indication of the fear the regime had from the role MEK played in inspiring the Iranian youth and population in their quest for freedom and democracy.

The attack preceded the criminal massacre in camp Ashraf in September 2010, where 52 of the remaining 101 MEK members who were looking after the MEK’s properties in Camp Ashraf were slain in an ambush by the Iranian regime’s proxy forces under the supervision of Nuri al-Maliki.

During this missile attack, four ranking members of the MEK including, Mohamad Javad Saleh Tehrani, after over 34 years of struggle against the dictatorship in Iran, Mohammad Najafi, after 35 years, Mahmoud Borna-Far after 29 years, and Yahya Ziarati after 25 years of struggle for freedom and liberty for their country lost their lives.

Following the criminal attack, supporters of the MEK took to the streets in various countries in Europe and North America, protesting the lack of protection for the members of the main Iranian opposition to the religious dictatorship ruling Iran. They also protested the Western government’s inaction in protecting the dissidents against numerous attacks by proxy forces of the Iranian regime. The MEK members were considered protected persons under the Fourth Geneva Convention at the time.

Immediately after the fourth missile attack on Camp Liberty on 26th of December 2013, Maryam Rajavi, the president-elect of the NCRI said: “This terrorist missile attack was [Iraqi Prime Minister Nuri] al-Maliki’s souvenir to residents of Liberty following his visit to Tehran and a deliberate act of crisis-mongering to overshadow the hostage-taking and the great and heinous crime against humanity at Camp Ashraf on September 1, which aroused international condemnation, prompted a 108-day hunger strike and trapped Maliki’s National Security Advisor in the Spanish Court.”

She added that this attack was another down payment Maliki wanted to pay to the clerical regime in Iran to support his third term as Prime Minister. It also reflected [the Iranian Supreme Leader Ali] Khamenei’s desperate attempts to confront the crisis of overthrow facing the crisis-riddled and vulnerable theocracy. Khamenei is trying to salvage the regime through the massacre of the MEK members, especially after giving in to the nuclear accord.

The memory of those fallen heroes is now flourishing

in the determination of millions of youth in Iran, who are taking to the streets of Iran, despite all the repressive measures by the government and will eventually free Iran.