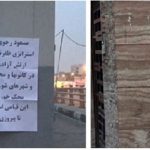 Written by Mohsen Aboutalebi on December 20, 2019. Posted in NEWS

MEK Iran activities across the country

The members and supporters of the People’s Mojahedin Organization of Iran (PMOI/MEK Iran) are risking their lives to continue the November uprising with pro-resistance activities targeting the mullahs’ regime.

There are dozens of places across the country that are continuously becoming scenes of resistance as the MEK Iran members plaster up posters and quotes of MEK Iran leaders Massoud Rajavi and Maryam Rajavi.

In Ahvaz, MEK Iran member put up a large banner of Maryam Rajavi, with the quote “Rise up to overthrow the mullahs’ regime”. Other posters of the MEK Iran leaders in that city read “Death to [Supreme Leader Ali] Khamenei– Hail to Rajavi”.

In Rasht, MEK Iran members put up a poster of Massoud Rajavi, which called on the youth to continued the uprising against the mullahs, with one poster reading, “The mullahs’ regime has reached its end”.

Activities of #MEK #Iran‘s Resistance Units including posting banners carrying pictures and messages of #MaryamRajavi, and Massoud Rajavi, in Tehran, as well as in cities of Ahvaz, Abadan, Rasht, Karaj, Sirjan, and Isfahanhttps://t.co/nP64RGONp3#IranProtests @USAdarFarsi pic.twitter.com/i47b4156mX

In Mazandaran Province, a Massoud Rajavi poster put up by the MEK Iran says “It is time to multiply and expand rebellious areas across the country… The liberating army strategy has spread throughout Iran”.

While various MEK Iran posters in Mashhad, read “Khamenei, you murderer, your end is near” and “Massoud Rajavi: Protests continue”.

In Tabriz, the MEK Iran put up Massoud Rajavi images with the quotes “Truly, the rebellious youth have made life a living hell for the mullahs’ regime” and “Death to Khamenei – Hail to Rajavi”.

In Damavand, Sabzevar and Marivan, and Lorestan and Zanjan Provinces, the MEK Iran put up posters with various quotes from the MEK Iran leaders.

In Tehran, the MEK Iran put up various images of Massoud and Maryam Rajavi, with quotes encouraging Iranians to increase their resistance efforts and weaken the regime.

All of this should be very alarming for the mullahs’ regime.

These MEK Iran supporters are risking their lives to conduct these anti-regime activities as support for the MEK Iran is punishable by death under the mullahs.

The MEK Iran supporters are risking their lives even more given the brutal crackdown imposed by the mullahs’ regime in the recent anti-regime protests. The MEK Iran has confirmed that there are at least 1,500 protesters killed by the regime, with the MEK Iran being able to confirm and publish 547 names so far. The MEK Iran reports that over 4,000 were injured and 12,000 arrested, with those numbers only rising.