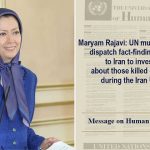 Written by Amineh Qaraee on December 11, 2019. Posted in NEWS 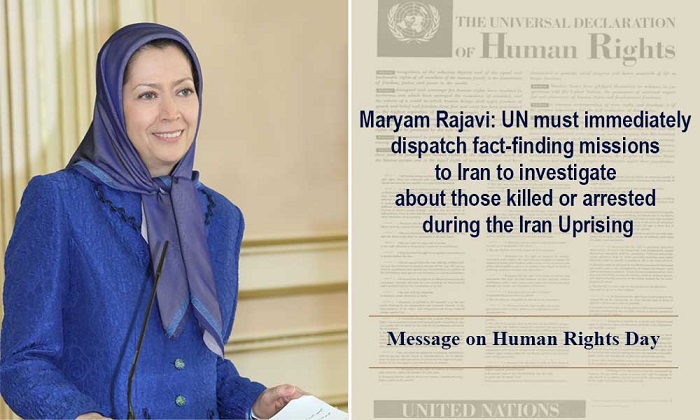 On Tuesday, December 10th, Mrs. Maryam Rajavi, President-elect of the National Council of Resistance of Iran (NCRI), delivered a message on the occasion of the anniversary of the adoption of the Universal Declaration of Human Rights. She demanded that the United Nations immediately send a fact-finding mission to Iran to determine the number of victims of the November Uprising and to investigate the status of those arrested during the protests.

A Revolt for Freedom and Democracy

“The uprising of the people of Iran which started simultaneously in 190 cities and towns across Iran on November 15, is a revolt for freedom and democracy,” said Mrs. Rajavi. “It is an uprising to end religious tyranny, and the poverty, destitution, and devastation it has imposed on the Iranian people’s social and economic life,” she continued.

On the UDHR anniversary according to which “human beings shall enjoy freedom of speech and belief and freedom from fear and want,” I echo the cries of over 1,000 slain protesters & ask why is the world silent and apathetic towards the crimes of #Iran mullahs? #HumanRightsDay pic.twitter.com/RyrSOipN9O

Mrs. Rajavi enumerated the ways that the mullahs have systematically deprived the Iranian people of their human rights. She said that people’s rights had been denied or violated in the following areas:

Mrs. Rajavi stated that under these circumstances, the Iranian people have been left with no choice but to exercise the option provided to them in the preamble of the Universal Declaration of Human Rights, and have taken “as a last resort, to rebellion against tyranny and oppression.”

The actual number of martyrs is far greater than 1,000. So far, the names of more than 400 have been announced by the Iranian Resistance. The regime is refusing to hand over the victims’ bodies to their families or bans them from holding funeral ceremonies for the martyrs. #Iran pic.twitter.com/HUSLKxeWro

What the Uprising Revealed

Mrs. Rajavi stated that the Uprising proved several things about the state of Iran. First, it confirmed that the people of Iran are ready and willing to overthrow the corrupt clerical regime. Second, the uprising showed the power and influence that the MEK and its Resistance Units within Iran. The MEK organized and led the revolt in cities across the country. Finally, the uprising proved that the mullahs’ regime is on its way out.

A Call to the International Community

Mrs. Rajavi concluded her message with an urgent plea to the international community.

“The horrendous mass killing of November 2019 is one of the most horrific crimes of the 21st century,” she emphasized. “The EU should demand an immediate halt to the killings and arrests. If the regime does not comply, they must readily pull the trigger of UN Security Council sanctions,” she continued.

“The clerical regime is making every effort and using all means to conceal the truth about the death toll. The United Nations must immediately dispatch fact-finding missions to Iran to investigate about those killed, injured and imprisoned,” she went on.

She also urged the U.N. Security Council to declare the regime’s leaders responsible for crimes against humanity and to ensure that they face justice.

Finally, she asked the international community to stand with the Iranian people in their struggle for freedom and democracy, saying, “I urge the world to recognize the Iranian people’s Resistance and uprising for the overthrow of the regime.”