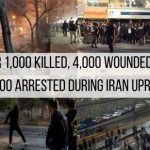 Written by Esmail Mohades on December 11, 2019. Posted in NEWS

The main opposition to the Iranian regime, the People’s Mojahedin Organization of Iran (PMOI), also known as the Mujahedin-e-Khalq (MEK Iran), is continuing to compile the names of those who have been confirmed dead in the ongoing uprising that has swept across the country since mid-November. The PMOI / MEK Iran has listed the names, so far, of 432 of more than a thousand protesters that have died.

The death toll is continuing to rise as are the numbers of injured and arrested. The PMOI / MEK’s latest figures, released on the 27th day of protests, indicate that more than 12,000 protesters have been arrested, more than 4,000 injured and at least 1,000 killed.

The Iranian Resistance, including the PMOI / MEK, is calling on the international community to speak out in support for the people of Iran and to condemn the regime for its cruel treatment of the protesters.

Last week, the United States Senate held an event supporting the Iranian protesters that are calling for regime change. A number of political figures participated in the event, including Senator Martha McSally (R-AZ) who called on European leaders to “step up” and to recognize the bravery of the Iranian people. She said: “We need to continue to crank up the pressure on the regime until the Iranian people are finally free.”

The United States Senate hosted an event last week in support of the #IranProtests for regime change#Iran #StopIranBloodshed #FreeAllProtestershttps://t.co/8fXZxTuF82 pic.twitter.com/xIIoleO4Km

Governor Tom Ridge specifically mentioned the PMOI / MEK in his message, highlighting that the Iranian opposition is working towards “justice and freedom and independence”. He said: “ (…) it’s about time that the United States of America leads that effort among democracies to not only condemn this regime but to publicly support the democratic uprising, proudly led, proudly led by the MEK.”

Ambassador Lincoln Bloomfield Jr highlighted that the people of Iran and the MEK have been struggling for years against the tyrannical rule of the mullahs.

Lincoln Bloomfield, the former United States Assistant Secretary of State for Political-Military Affairs, participated in a briefing at the U.S. Senate, over the recent nationwide #Iran protests and supported the #IranProtest and their organized resistance#MEK pic.twitter.com/ahdGDGbRWD

The MEK has “Resistance Units” the whole way across the country. They have been instrumental in supporting the people during this difficult time, helping organize protests and provide information to networks outside the country about the situation on the ground.

Members of the MEK have been putting up posters of Maryam Rajavi, President-elect of the National Council of Resistance of Iran (NCRI) and Massoud Rajavi, the leader of the resistance. The MEK’s activities have intensified and it is becoming very clear that they and the people are determined to see the regime collapse.

Mrs. Rajavi has called on the United Nations Security Council to take action to prevent the Iranian regime from carrying out further crimes against humanity. She also encourages all countries to condemn the Iranian regime’s violence and brutality and for the people of Iran and their legitimate demands for freedom, democracy and human rights to be supported.