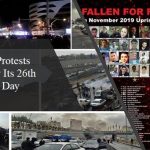 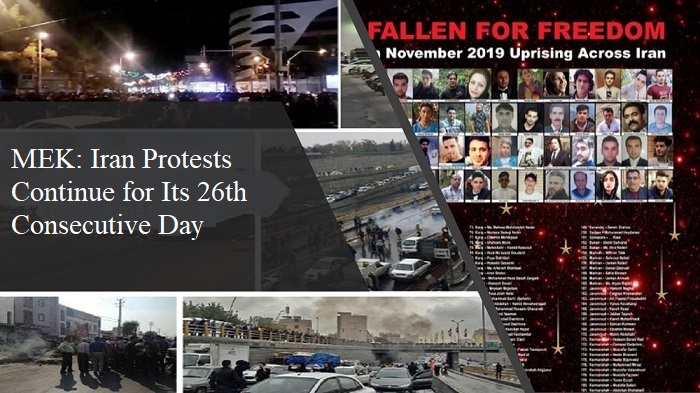 Day 26 of the Iran Protests for Regime Change

Tuesday is day 26 of the nationwide protests for regime change in Iran and the main opposition group People’s Mojahedin Organization of Iran (PMOI/MEK) has now announced the names of 400 protesters killed by Iran’s regime of the over 1,000 dead.

The  Iranian resistance confirmed that Massoumeh Darabpour is the 25th woman to have been killed in the Iran uprising.

The protest, sparked over a major rise in gas prices, quickly turned political and spread to nearly 200 cities. The demonstrators demanded regime change, with the overthrow of the mullahs’ regime in its entirety. So far, 4,000 have been wounded and over 12,000 arrested and threatened with the death penalty.

Maryam Rajavi, President of the National Council of Resistance of Iran (NCRI), has called on international governments to intervene to end the regime’s crimes against humanity.

UN must immediately dispatch fact-finding missions to Iran to investigate about those killed or arrested during the #Iran Uprising- Message on #HumanRightsDay https://t.co/VOZceZreh2 pic.twitter.com/REARpE7Xop

Rajavi tweeted: “The mullahs have seen themselves on the brink of collapse. They want to evade this fate by committing crimes.”

Several individual politicians have voiced their support for the Iranian people, including  Judy Sgro, Member Of The House Of Commons Of Canada, Cristina Iurișniți, Member of the Romanian Parliament, and Danish Foreign Minister Jeppe Koford.

Meanwhile, the Portuguese Parliament issued a resolution condemning Iran for the crackdown, voting almost unanimously in favor of the resolution, initiated by MP Cecília Meireles. MP  Luís Leite Ramos, from the Social Democratic Party, said the resolution was a formal declaration in condemnation of the murder of Iran’s peaceful protesters.

The European Union said that the regime’s deadly crackdown was “unacceptable”, with the EU’s new foreign policy chief Josep Borrell Fontelles writing a declaration on behalf of the bloc to demand that the regime release detained protesters.

He wrote: “A growing body of evidence indicates that despite repeated calls for restraint, the Iranian security forces’ disproportionate response to recent demonstrations has led to high numbers of deaths and injuries.”

Meanwhile,  freedom-loving Iranians and supporters of the MEK held rallies in Oslo, Ottawa, Toronto, and Hamburg to voice their support for the Iranian people’s brave November uprising. There were previous rallies in Sydney, Melbourne, and Canberra in Australia, as well as London and Washington DC.

The Regime claimed that they have the protests under control, but continued demonstrations across Iran show that not to be true. Yesterday, in Isfahan, Central Iran, Al Zahra Hospital Staff went on Strike to protest delays in receiving their paychecks.

Elsewhere, MEK members have been plastering up posters of Rajavi with her quotes to inspire the protesters.