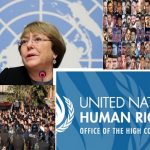 Written by Amineh Qaraee on December 8, 2019. Posted in NEWS

The UN High Commissioner for Human Rights Michelle Bachelet said Friday that it has video evidence showing that the Iranian regime’s security forces “shooting to kill” protesters during Iran’s latest wave of demonstrations.

On December 6, 2019, Michelle Bachelet, the UN High Commissioner for Human Rights released a statement saying that she was alarmed by “the continuing lack of transparency about casualties and the treatment of thousands of detainees” during the recent protests in Iran.

In the statement, she called for “prompt, independent and impartial investigations” into all possible violations needed to be undertaken, “including the killing of protesters.”

“These are clear violations of international norms and standards on the use of force, and serious violations of human rights,” Bachelet said. “In such circumstances, with so many reported deaths, it is essential the authorities act with far greater transparency.”

“All in all, the picture now emerging from Iran is extremely disturbing,” Bachelet added.

In a press briefing on Wednesday, Brian Hook, the US State Department Special Representative for Iran said that the Iranian regime “could have murdered over 1,000 Iranian citizens,” in recent protests.

In one incident in which Hook said U.S. officials believe the Iranian regime’s security forces opened fire with machine guns on a large crowd of protesters, killing more than 100 and then loading their bodies onto trucks to be carted away.

on Wednesday, Hook talked about the violence inflicted upon demonstrators, describing one incident in which he said U.S. officials believe security forces opened fire with machine guns on a large crowd of protesters, killing more than 100#IranProtests @USAdarFarsi #Iran #MEK pic.twitter.com/U1UCRCFi6R

This week, the Iranian regime’s officials were compelled to acknowledge that the regime’s security forces used firearms to crackdown the protests. On Tuesday, December 3, state-run television reported that the protesters who were killed in the crackdown were “rioters who have attacked sensitive or military centers with firearms,” and described how the armed forces had “deftly and vigilantly” fought back against “hostile groups”.

On December 6, the People’s Mojahedin Organization of Iran (PMOI/MEK) released the names of another 30 people who had been killed by the security forces in the protests, bringing to 350 the number of victims who have been identified so far.

Earlier the MEK announced that the number of protesters killed by the regime’s security forces has exceeded 1000 and several children and minors were among the victims.

The Secretariat of the National Council of Resistance of Iran (NCRI) released a statement on Friday, listing the names of 350 victims.

PMOI/#MEK released the names of another 30 martyrs of the #Iranian people’s uprising, bringing to 350 the number of victims who have been identified so far#IranProtests #StopIranBloodshed #Iran pic.twitter.com/To4n40Oao6

“Mrs. Maryam Rajavi, President-elect of the National Council of Resistance of Iran (NCRI), hailed the uprising’s heroic martyrs and called on the United Nations Security Council, the European Union, and its member states to condemn this horrendous mass killing by the Iranian regime and to take urgent action to stop this crime against humanity and secure the release all those arrested. “ NCRI’s statement reads adding:

“She called on the UN Secretary-General to send a fact-finding mission without delay to investigate this horrific crime and visit the prisons and meet the prisoners. The international community must ostracize the murderous theocracy ruling Iran from the community of nations. Khamenei, Rouhani and other regime leaders must face justice, Mrs. Rajavi added.”