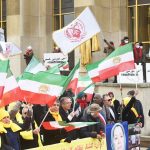 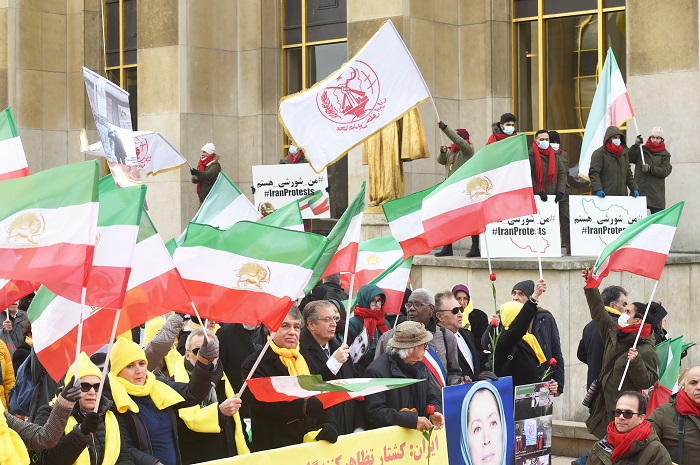 Iranians Protest against the crackdown in Iran- Paris

The Iranian community in France and the supporters of the People’s Mojahedin Organization of Iran (PMOI, Mujahedin-e Khalq or MEK)  held a rally in Paris’ Trocadero Square to show their support for the Iranian uprising that has been raging since November 15 and has been the subject of a brutal crackdown by the regime’s security forces that left at least 1000 protesters dead.

The Esplanade of Human Rights was filled with people waving tri-color Iranian flags and holding up pictures of the martyrs of the uprising.

The supporters of the National Council of Resistance of Iran (NCRI) and the MEK were joined by members of the French Parliament, councilors, mayors, and dignitaries.

Hundreds of Supporters of the main #Iranian opposition group People’s Mojahedin Organization of Iran (PMOI/#MEK) rallied in Paris on Monday, December 2, 2019, to denounce Iranian regime’s crackdown on the protesters in #Iran and express their support for the #IranProtests pic.twitter.com/piBZU0LlIz

In the square, protesters broadcast a video message by NCRI president-elect Maryam Rajavi, who called on France to lead a European initiative to send an international fact-finding mission to Iran’s torture chambers.

“The blood of over 600 rebellious youths, the cries of 12,000 arrested youths detained in Khamenei’s torture chambers, and the cries of a rebellious nation from across Iran call on the world to stand up to the religious fascism.”

She further explained that this uprising showed that the regime is not capable of containing the “roaring tides of protests and social rebellion” and that, no matter what the regime throws at them, the Iranian people will never give in. She said that the uprising will continue until the regime is overthrown and freedom is established.

“The conditions will not revert back to the pre-uprising equilibrium. Horrified by the looming spectre of being overthrown, the mullahs are resorting to outrageous crimes. Khamenei has ordered his mercenaries to shoot directly at youths in the streets. Rouhani has praised the criminal repressive forces.”

Rajavi regretted that the international community has failed to respond properly to the regime’s crimes against humanity in this uprising, noting that the European Union must end it’s appeasement of the regime because there should be no concessions for a regime that “slaughters protesters” and breaches its commitments under the nuclear deal.

At the protest, Michèle de Vaucouleurs, Head of the Parliamentary Committee for a Democratic Iran in the French National Assembly, said: “We are all here today to support the Iranian people, who have but one aspiration, liberty for Iran.”

While Jean-Francois Legaret, Mayor of Paris’ 1st District, said the Iranian people had no choice but revolt.

Mayor Legaret @Mairiedu1: "The masks have fallen, no to #Rouhani, he is not a moderate.We can not negotiate with a barbaric regime … Those who have committed crimes against humanity must be brought to justice #IranProtests #FreeAllProtesters #StopIranBloodshed pic.twitter.com/Pb7oI3GZEh

“The masks are off the faces. [The regime’s President Hassan] Rouhani is not a reformist. We cannot negotiate with a barbarous regime. Those in charge of crimes against humanity should be put to trial.”